A roundup of the latest research reveals interesting findings. 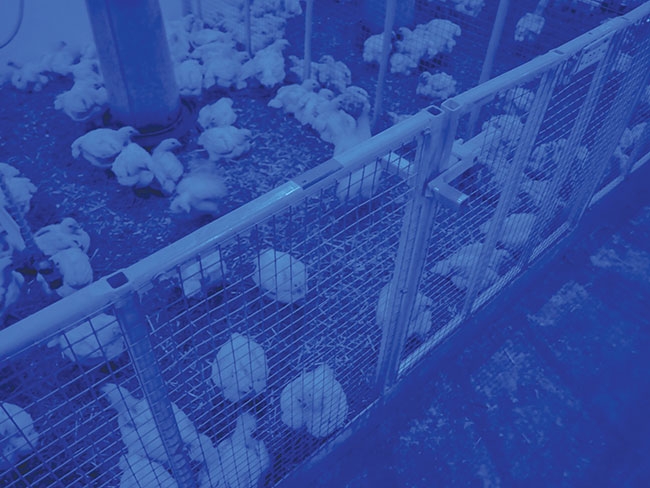 Pictured is one of the rooms University of Saskatchewan researchers raised broilers in to assess the impact of blue lighting. photo courtesy of Bruna Franco

Across the country, researchers are evaluating lighting systems for their potential to improve growth, reproductive efficiency, health and welfare. Here are some of their most interesting observations.

White, blue and green
Poultry are more sensitive to light wavelengths than humans. They can even sense ultraviolent (UV) light. While research is being done in UV lighting, much is still focused on monochromatic lighting, which is now possible with LED lights.

Some LED research has been conducted, but according to University of Saskatchewan (U of S) associate professor of poultry science Karen Schwean-Lardner and a report compiled by her research assistant, Tory Shynkaruk, the literature is somewhat contradictory. While a number of studies show that blue light improves growth and feed efficiency, others found that yellow or even white light had the biggest impact on production parameters.

At U of S, Schwean-Lardner, along with PhD student Bruna Franco, conducted three large experiments with over 20,000 broilers and compared white, blue and green light from zero to 35 days. Franca collected data on growth, feed efficiency, feed intake and mortality, for which only minor impacts were observed.

“With these large numbers it is really interesting that the impacts did not show up, which suggests light colour is not so important in a well-managed flock,” Schwean-Lardner says. “Where Bruna did find differences were in bird behaviour.

“We have always thought that blue light makes birds calmer – it certainly does something,” she continues. “The birds reared under blue light are less stressed and less fearful. This could have implications in scratching during production, and possibly load-out and lairage for broilers”.

Franco is now trying to figure out why. She has conducted tests to determine if the differences are visual in nature, but no strong effect has been noted. This fall, she has scheduled MRIs for chickens to see if changes can be detected in the brain.

Red spectrum and reproduction
Eight years ago, University of Guelph researcher Grégoy Bédécarrats began studying the impact of light on reproduction, trying to understand how light impacts the brain to stimulate the process. It was clear to him from some of his experiments that the eye was not at all involved in activating reproduction. Instead, it is mediated by photoreceptors in the brain.

In his study, Bédécarrats used a blind breed of bird known as Smokey Joe to test red spectrum light and its impact on the birds. The researchers learned that red spectrum light penetrates more easily through tissues in the skull to activate the photoreceptors. That was the starting point.

In an attempt to develop something suitable for poultry barns, Bédécarrats worked closely with Thies Electrical Distribution and came up with a commercial solution known as Agrilux.

“The rationale behind it is we wanted to increase the amount of red spectrum in the output of LED bulbs for layers and breeders to help stimulate the reproductive axis and to give a little boost for egg production,” he said.

After testing the lights in in-house trials, they were able to prove that red spectrum light does stimulate reproduction axis. His research, along with the results of others, shows that a 60 per cent red light bulb promotes egg production in layers, and a 60 per cent green light promotes growth and weight gain in broilers.

UV wavelength
To date, little research has been conducted on UV lighting. According to different studies pulled together by Schwean-Lardner’s research assistant Shynkaruk, it has been suggested that UV sensitivity in poultry could be associated with orientation, foraging and signaling; vitamin D<sub>3</sub> synthesis; reduced injurious pecking in turkeys; reduced stress; and lower basal corticosterone levels, less inactivity and more exploratory behaviours. This research is still very much in its early stages.

At the University of Nottingham in Europe, Department of Animal Sciences researcher Charlotte James recently published a scientific paper on the effect of supplementary ultraviolet wavelengths on broiler chicken welfare indicators.

Broilers reared in UVA and UVA plus UVB conditions both had improved walking ability compared to the control. Taken together, the results suggest that UV lighting could be beneficial for broiler chicken welfare, James says.

While both treatments provided UVA, the improvements in welfare indicators were inconsistent, which may be due to exposure time-dependent beneficial effects of UVA, she adds.

The results regarding fearfulness are particularly interesting. Animals that are fearful, said James, are more likely to succumb to stress, which can negatively impact health and performance.

UVA is also known to increase activity in chickens, which is beneficial because it helps to improve litter quality and leg strength. Although most producers don’t want birds to move around too much, since it impacts weight gain.

“Moving around more and performing more of their natural behaviours is beneficial to their welfare,” James says.

James says more data will be coming out from this study in terms of bird performance. Although she hasn’t completed her evaluation of the data, she says that initial results are promising.

“I think the UV and full-spectrum lighting really has huge potential for benefits for the poultry industry, not only for bird welfare, but potentially for performance too,” she concludes.

The system allows producers to control not only the intensity, but also the entire spectrum. Each colour can be dimmed independently, which allows them to mimic spectrums that naturally occur throughout the day and over the different seasons. The company’s goal was to mimic naturally occurring daylight as much as possible.

“We don’t market our lighting system as a silver bullet that solves all poultry farmer problems and increases his production efficiency,” Lautenblach says. “Concrete results are hard to communicate at the moment. What we do see is a strong increase in animal health and body structure in comparison to first generation LED lighting systems.”