An update on exciting new products and why year-round product sales are growing. 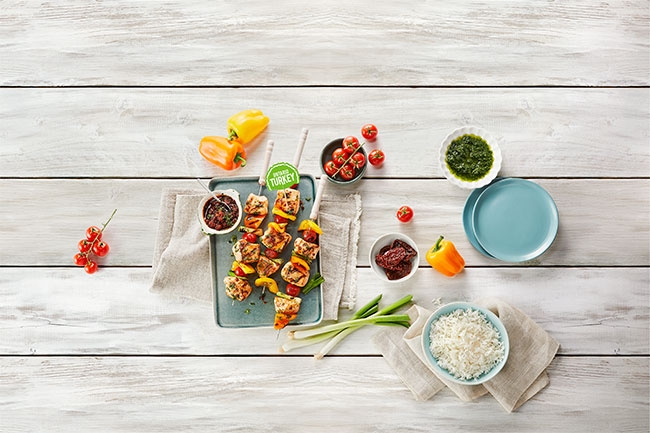 While festive seasons still account for the vast majority of whole turkey sales, the popularity of other turkey products throughout the year has continued to grow. Pictured are turkey kabobs with sundried tomatoes, a new recipe Turkey Farmers of Ontario released this year.

The protein product market has never been more crowded in Canada. The widest variety of meat, poultry egg and vegetarian options in history all entice us from their grocery store shelves, constantly vying with each other for a bigger slice of the protein product pie. However, Turkey Farmers of Canada (TFC) says that while Thanksgiving, Christmas and Easter still account for over 90 per cent of annual whole turkey sales, the popularity of other turkey products throughout the year continues to grow.

TFC says annual sales of turkey parts and processed turkey products in Canadian supermarkets have increased from 10.9 Mkg in 1995 to 14.0 Mkg in 2016. This sales growth has been primarily driven by increased popularity of further processed breast meat products, cold cuts, sausages and ground turkey. “One of the areas that we have seen an increase in is the demand for further processing of turkey thigh meat, which of course is a co-product of breast meat production,” Kristina Fixter, TFC manager of corporate communications, explains. “Traditionally, Canadian turkey thigh meat was exported, and in 2007, we exported 1.4 Mkg of thigh meat. Today, exports of turkey thigh meat represent less than half of that even though the supply has increased in the order of 25 per cent in the last five years. This increase is due to the growing demands of Canadians, especially for ground turkey.”

Before getting into specific new products being offered by some major Canadian companies, first a look at marketing initiatives aimed at getting consumers to eat more turkey products regularly. Last year, TFC introduced a Canadian Turkey brand initiative using the www.canadianturkey.ca website and various social media campaigns. TFC also continued to build brand partnerships, such as the Carved Turkey Sandwich rolled out last fall at Subway restaurants. Another partnership example is the store promotion spearheaded by TFC and French’s Mustard, rolled out during last fall’s Thanksgiving season. Fixter says TFC is continuing in 2017 to boost the amount of turkey consumed throughout the year, and that the eight provincial turkey marketing boards also have specific marketing initiatives in place.

QUEBEC AND ONTARIO
For its part, Les Éleveurs de volailles du Québec (EVQ, Quebec’s marketing board for chicken and turkey) continues its online promotional activities. “We are very active on the web platforms for both brands,” Lizianne Fortier, EVQ director of marketing and communication, says. “In only a few years, we have gained…up to 50,000 fans on the Facebook page of ‘Le Dindon du Québec.’”

Like TFC, EVQ has also engaged in sponsor partnerships with companies and sports teams to entice consumers into trying turkey in new ways. “These partnerships allow us also to teach new chefs how to prepare and include turkey in different meals,” says Fortier. “We are working to increase the know-how to cook turkey with Quebecers with recipes, blog content, video content, association with meal kit delivery companies, cooking schools and grocery workshops. Launched in the fall of 2016, our new campaign, ‘On se fait un dindon?’ (‘Are we making a turkey’?), is promoting the whole turkey as the great gatherer for family, friends or even two at Thanksgiving and the holiday season and every festive moment of life.”

Prior to 2011, Turkey Farmers of Ontario (TFO) engaged in very little direct consumer marketing, but since then has been hard at it. Initiatives have included a TV ad campaign, billboards, social media, a website refresh and more. “New recipes were developed to educate consumers on how to use the various cuts of Ontario turkey that are now appearing in the meat and poultry departments of major grocery banners, and new marketing materials – recipe booklets and more – were developed to support the messaging and consumer education,” Emily Danard, TFO marketing co-ordinator, explains. “The campaign, measured with an annual survey, indicated that consumers were getting the message, and the decision was made to continue the momentum.” This year’s TFO marketing initiatives span new digital marketing (online banners and recipe videos), in-store promotions and experiential marketing, including the #TurkeyONTour branded trailer that visits grocery stores and events offering samples, recipe booklets and more.

NEW PRODUCTS ON THE MARKET
Granny’s Poultry Cooperative in Winnipeg (Manitoba’s only turkey processor) started offering ground turkey and pieces for year-round retail sales a few years ago, including a 1.3 kg boneless breast turkey roast in 2015 sporting a clean (natural) ingredient list. It still comes in an unstuffed version and a version stuffed with gluten-free cornmeal stuffing. “It won best new product in the Canadian Grand Prix competition,” Jason Wortzman, director of marketing and product development, says. “It’s designed to be very convenient. You can take it out frozen in the morning and put it in a slow-cooker and have a fresh roast when you get home.” Granny’s promotes turkey mostly through store flyer advertising and in-store features.

While festive seasons still account for the vast majority of whole turkey sales, the popularity of other turkey products throughout the year has continued to grow. Pictured are turkey kabobs with sundried tomatoes, a new recipe Turkey Farmers of Ontario released this year.

Like the turkey marketing boards and other companies in Canada, Maple Leaf has a positive view of the future of turkey product sales in Canada – and the power of marketing. “Historically, the United States has had higher consumption rates on turkey than in Canada outside of the holiday seasons,” the Maple Leaf media team notes. “This gives us reason to believe that marketing power behind items can close the gap.”

Turkey consumption – past, present and future outlook
In an interview, Jalila Soudari, market information officer for poultry at the market and industry services branch of Agriculture and Agri-food Canada, weighed in on the state of turkey consumption.

“Input costs have decreased and are expected to remain low in the near future,” Soudari says. “However, that is unlikely to change the general consumption trend for turkey and turkey products, which has been stable to weak.”

She notes that growth in the turkey industry is mostly reliant on the further processing sector, as consumption of whole birds has been fairly stable in recent years.