The future of barn management 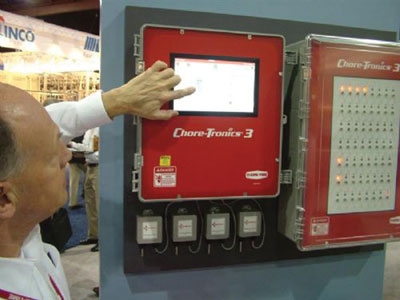 In my time working with Canadian poultry producers – even recently – I have noticed that many smart growers, who could make great use of more production feedback, have not taken advantage of the newest technologies available in climate controllers. The purpose of this article is to provide some information on what these controllers are capable of, and how you can use them to produce birds using fewer resources and proactively affect your birds’ health and growth.

In the extremely competitive marketplace of the United States, I have learned that their poultry companies are a great model for finding ways to lower costs. Because of the sheer size of companies such as Tyson Foods, Inc. (37 million head/week at 5.6 lbs)1, Pilgrim’s Pride (32 million head/week at 5.3 lbs) and Sanderson Farms (8.4 million head/week at 7.5 lbs), very small changes in per farm, per house or per head costs can make a huge difference. For instance, if a vaccine costs $0.005, or half a cent, less per bird, a company like Tyson Foods can save $9,620,000. Shipping birds a day or two early because of improved performance can be a huge cost savings as well. What is the cost at 35 or 42 days of age to run all of your fans, lights and other equipment in the summer, or heaters in the coldest part of the winter for an extra day?

Because of this, these companies analyze every decision, from insulation to equipment to feed pellet size, with extreme attention to detail. Each company has come up with minimum standards for their facilities that include a whole house controller.  Tyson Foods has used Cumberland controls in many of their complexes, and Sanderson Farms has made Rotem controls standard in all new building projects.  Here are some reasons why:

Integrated Control
Almost all of the current models available for the leading controller companies, including Rotem and Chore-Time, fully integrate the function of all components of climate control into a single unit, eliminating the need to program and co-ordinate several smaller controls. With this ability, tighter temperature bands can be maintained, with some controls able to regulate the temperature within a band of ±1⁰C, which is especially important when brooding.

The advantage of having inlet and fan function within the same unit is in having three or four types of inlets available to the same controller, which can be transitioned through and controlled by static pressure as different fans are activated.

This is a complex concept, so it is enough to understand that being able to smoothly transition from one type of inlet to another as the outdoor temperature changes throughout the day can save a significant amount of heating cost. For example, this can be accomplished by bringing air in from ceiling inlets during the day when the attic air is warm.

Individual heaters can be monitored and controlled in combination with inlet control, with some controls capable of handling up to 16 zones for great uniformity along the length and width of the barn.

A bonus in this setup comes from the more advanced controller’s rotation of fans, which can greatly extend fan life by utilizing all available fans, and therefore not repeatedly stopping and starting the same fan every cycle. Circulation fans can also be run at varying speeds based on house conditions. If someone really wanted to make the most of their controller, humidity and CO2 could also be included in the ramping of ventilation.

Data Tracking, Alarm Functions, Remote Control and Service
Obviously, heating and ventilation savings are a huge factor in payback on these computers, but some of the tools that allow users to track, analyze and manage those aspects are key.

Using your controller to collect heater run-time data (to find faulty heaters or air leaks), temperature and humidity logs by zone (including outside), feed and water consumption, bird weights from attached scales, mortality, and many other statistics can make all the difference in diagnosing and fixing problems that may not be immediately apparent by walking the barn.

The next part is alarm function. There are a few well-known alarm systems, such as the Thevco Agri-Alert systems and Sensaphone basic alarms. However, Thevco also produces a system called the A-box, Chore-Time has C-Central and Rotem has a combination alarm/data collection device called a communicator that ties into a software system called RotemNet.

Some of these have greater flexibility than others, but all allow for a quick response to emergency situations, remotely or in person, to prevent some of the costly scenarios at the beginning of this article. Also, some fail-safes and backup systems can be pre-programmed in. A couple of great examples of this would be an auger run-time monitor to stop the feed auger and send a specific alarm message out when the run time exceeds a preset time. Now you know if there is bridged feed in the bin, empty bins or a feed spill. In the case of a power failure, it could automatically drop the curtain or inlet to a set level and run fans on backup power to prevent bird loss.

Great service is something all equipment manufacturers, distributors and your local sales representatives want to provide. Utilizing some of these data-tracking and alarm systems can give your equipment and service providers a direct line to your controller from a remote location and provide you with premium technical service, even when they can’t be there immediately. For processors and feed suppliers, online tracking of feed inventory and bird weight can increase efficiency considerably by streamlining feed delivery and ensure birds are shipped to the plant at the right time and weight.

It is impossible in a limited forum such as this to fully explain all of the benefits of integrating all of the barn functions into a single interface. It is in everyone’s best interest to investigate the options on your own, or consult with trusted equipment professional. Learning the ins and outs of a new system can be very exciting and eye opening; just ask someone who’s already made the jump. Would you rather shovel a few hundred dollars in spilled feed out the end door, or sit down for a couple of hours with your equipment supplier learning about your new controller?

Shawn Conley is with Weeden Environments in sales and technical service, internationally and in Canada. He manages projects with many U.S. poultry companies and works frequently with researchers in the industry. He can be reached by e-mail at shawnc@weedenenvironments.com or shawn.d.conley@gmail.com.