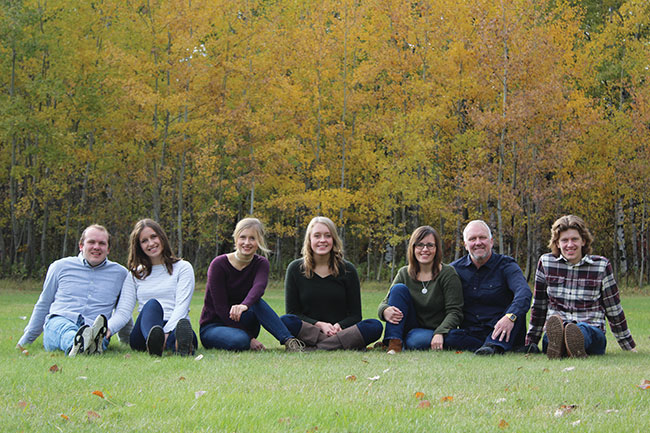 Evy Wiebe (third from the right) and husband Rod, pictured here with their family, are industry leaders in raised without antibiotics production.

Anyone who has seen Evy Wiebe in action knows she’s an excellent advocate for Canadian poultry producers. This is no small feat; advocacy is tough work – and necessary. Producers are lucky to have her in their corner.

Wiebe grew up on a small hobby farm in northern Ontario, a place she calls “the farm that time forgot.”

In 1994, she married Rod Wiebe and the two of them took over the family farm from Rod’s parents. The farm is located in Grunthal, Mb., just one hour south of Winnipeg.

The Wiebes have four children, three girls and one boy. The oldest, Emma, completed a nursing degree. She and her husband have a bee farm and live just next door.

The other three, Julia, Katrina and Sam, are still pursuing their studies. Two of the children are interested in taking over the farm when their parents retire.

RWA leaders
The Wiebes raise antibiotic-free broilers – 58,721 kg per cycle in two barns, one double level and one single level. In fact, the producers are considered industry leaders in the raised without antibiotic (RWA) subsector.

They’ve been in the program for three years and Wiebe says it’s an interesting challenge. The birds need longer to grow and their health must be closely monitored throughout.

Managing RWA broilers is more challenging too. Water, heat and feed must be closely monitored. There is little margin for error, Wiebe says. Litter presents a challenge, too, as the birds’ 100 per cent-grain-based diet makes for wetter manure. Wetter manure means more ventilation, and more ventilation means more heat.

To address these challenges, the producers work closely with their local feed mill. Wiebe says their relationship with their feed guy is crucial to the farm’s success. Diet has a great impact on manure and, therefore, the quality of litter. Together, they’ve been able to fine-tune the system to reduce moisture.

The reason they chose to go into RWA was partly because they were offered the chance and partly due to increased demand. “We believe that this is where the consumer is going,” Wiebe says.

Broiler farming is their primary source of income. While Rod spends every day in the barn, much of Wiebe’s time is devoted to family and her advocacy work. The producer spends at least one day a week in the barn.

Path to advocacy
Admittedly, Wiebe wasn’t always an advocate for Canadian agriculture. Her path began while doing door-to-door work for the Government of Canada.

At one home, she spoke with a farmer who asked why she was not an advocate for her sector.

“She said if you love your industry and you want it to continue, you need to advocate for your industry,” the chicken farmer recalls. “I stopped a bit and thought about it. It took me a while to actually act on it, but that’s what started this. Someone challenged me.”

That was back in 2007. Since then Evy has taken every opportunity to meet with consumers to raise awareness about poultry farming in Manitoba. Her first gig took her to the Red River Exhibition where she talked to visitors about chicken farming.

“It was a very casual environment,” Evy says. “You would be standing in the booth and be available for when people had questions. And you would ask them questions and initiate conversations to engage them with chickens.”

Engaging the public
At first, Evy says she didn’t do a lot of initiating. Instead, the producer waited for people to approach her.

But as her confidence grew she began to engage with visitors as they passed by. In some cases, she would ask people what they knew about chickens. Most had no experience with farming. In fact, many of them didn’t know the difference between a rooster and a hen.

While many of the questions Evy gets are simple, sometimes she’s faced with tougher questions. Once someone asked her how chickens are slaughtered. In her experience it’s best to always tell the truth, but no more than what is necessary, she cautions.

Since the produceer had visited her local processor she was able to assure them that great care is taken throughout the bird’s life right through to the end.

“I’m 100 per cent comfortable with it, so I want to – when I interact with the public – give them some of the peace I’ve come to so that they can trust that animals are treated humanely,” the producer says.

“The entire life cycle – from when they arrive in my barn until they exit my barn – they were treated well, and I know that the processing plant also treats them well and they are given a humane end.

“I want to give the public that confidence because I believe it’s there,” she adds. “We treat our animals well.” 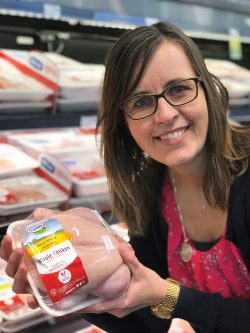 Thanks to her teaching degree, educating the public about chicken farming now comes naturally for Wiebe. Photo: name tkherious

A natural
Manitoba Chicken Producers (MCP) food and consumer relations specialist Gina Sunderland has worked closely with Evy for years. In her role at MCP, Sunderland looks for farmers who like communicating with the public and are great at sharing their story.

“Hands down, Evy Wiebe is not only kind and humble, but she is an extremely strong communicator,” Sunderland exclaims.

“It’s very natural for her. She loves her work, she loves being a farmer and she is able to engage and captivate an audience.”

Sunderland says Evy has a gift for knowing where to start when approaching a subject. Evy attributes this gift to a teaching degree, which she uses to bridge the gap between the two worlds. “For some people it’s really simple, but for some it’s more complicated,” she says. “But you look at the knowledge base that the person has and then you just try to stretch it.”

Tireless advocacy
Evy’s advocacy work has taken her many places. She’s met with consumers in front of the chicken counter in Manitoba grocery stores.

She’s participated in Discover Agriculture in the City, an initiative held at The Forks in the center of Winnipeg. It’s a daylong event that draws people of all ages from all walks of life.

Sunderland says poultry farmers are lucky to have Evy as an advocate. “She’s incredibly engaging, vibrant, friendly… people listen to her,” Sunderland says. “She has an incredible way with the public and she has never said no.

“She looks for opportunities, gets out there and engages,” Sunderland continues. “She’s an incredible community ambassador for our industry.”