From city kid to egg farmer and champion for agriculture. 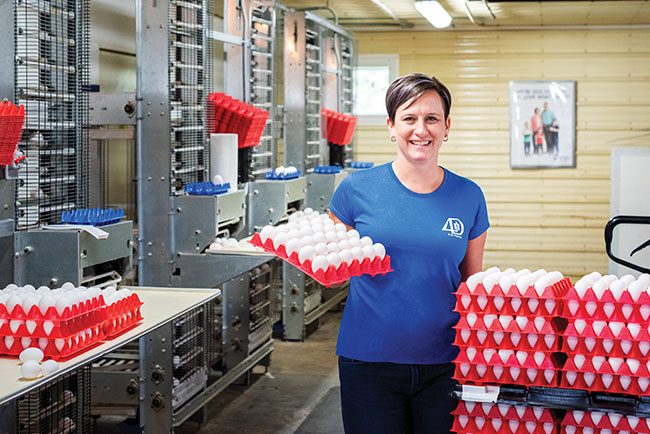 Sandra Dyck grew up a city kid in the suburb of Charleswood, a residential community west of Winnipeg’s busy city center. Her father had owned a series of gas stations and car washes dotted throughout the city, but having grown up on a farm, his heart was always in the country.

When she was 15, Dyck’s father sold everything and purchased a broiler farm near Steinbach. The move was tough at first, but she soon came to love life in rural Manitoba. That love has grown into a passion that she harnesses in her work as an advocate. In fact, you’d be hard pressed to find a bigger champion for agriculture and rural living.

Today, Dyck is a full-time farmer, working closely with her husband Eric and their three kids, Rylee, Levi and Jacob. 4-D Farms Ltd. is located in Springstein, Man., about 15 minutes west of Winnipeg.

Dyck spends most of her time in the family’s layer barn, which has been in production since 1967. She and her husband have quota for 4,500 hens. The layers are housed in enriched colony housing.

They also own a leafcutter bee pollination business. Through the latter they custom pollinate alfalfa for seed. What’s more, the family has invested in solar energy and produces enough to power their farm.

Open-door advocacy
A true advocate for the agricultural sector, Dyck’s work connects her with a cross section of the public – from schoolchildren to new Canadians to curious consumers. She and her husband work with a number of organizations, opening their farm up to the public.

The Fort Whyte farm initiative and the University of Manitoba’s agricultural program are the tour’s main organizers, but the farm is open to any groups that are interested in learning about agriculture. Approximately 150 to 200 people visit the farm each year.

“Education but also exposure is key to helping people understand farming,” the producer says. “It’s one thing to read about farming, but to experience it and see first-hand… that speaks volumes. They come to understand our farming practices and then they’re also advocates for us too.”

The Fort Whyte group brings inner city youth to the farm through a hobby program that teaches them gardening, beekeeping and small-scale livestock farming. The initiative also includes tours of commercial farms.

Dyck enjoys this program as it gives the kids the opportunity to experience something totally different and helps them to explore options when it comes to future employment.

Groups of new immigrants also visit the farm as part of an English as a Second Language (ESL) program. Many were farmers in their home countries and are excited to see how operations work in here in Canada.

Second-year agricultural students from the University of Manitoba visit a number of farming operations across the province. Doing so allows them to see what they’ve learned about in practice. It helps them see the range of possibilities when it comes to working in agriculture.

Raising her game
The visitors aren’t the only ones expanding their horizons. The tours have inspired Dyck to expand hers as well. The producer’s goal for 2020 is to gain a better picture of the different commodity groups through her membership to Keystone Agricultural Producers of Manitoba (KAP). She believes further education will make her a better advocate.

“I find when I go to these events and do these tours people don’t just have questions about poultry or grain,” the egg farmer says. “They ask me questions about cattle, and I’d like to have an educated answer for them.”

As a city kid who suddenly became a farm kid, Dyck understands first-hand just how little city folk sometimes know about how food is produced. Her volunteer work came full circle when, while volunteering for Ag in the Classroom, the producer got to visit her elementary school in Charleswood to talk to kids about farming.

“That’s where I started out as a little kid, and I was able to go back there and share with them my experience as an egg farmer,” she says. “It was really cool.”

Through Manitoba Egg Farmers (MEF), Sandra has volunteered at other events aimed at educating the public. For World Egg Day, she was one of a team of farmers who volunteered on behalf of MEF to educate consumers in grocery stores. They set up stands near the egg cooler and shared information on egg production in the province.

Dyck says their presence helped clear up some of the confusion around the different types of eggs available to consumers. “People love it,” she said. “People come with great questions and stories. It’s very well received.”

The producer also volunteers for Ag in the City, an event where different commodity groups get together at the Forks Market in downtown Winnipeg. It promotes agriculture and is aimed more at adults than children.

But her advocacy work also has her working with children. As a 4-H leader for the Starbuck, Man., club, the rural kids she works with do projects focused on sewing, cooking, camping and outdoor survival. Most of the kids are not from farms, but live in small towns.

The aim is to provide leadership training for youth. They learn how to run a meeting efficiently, how to manage money and keep minutes.

Last year she led a project on small livestock. This year she’s leading the energy program.

Once a month, Dyck teaches Sunday school at the local church. She and her husband also initiated their own club for kids in their community where the kids play games and do crafts. They sometimes give a small lesson to help introduce the children to church.

“My husband and I truly believe in giving back,” she said. What’s the point of it all if you’re not able to give back?”

Fueled by advocacy
While the average person would be exhausted just by reading the list of Dyck’s commitments, she says it’s what fuels her. Before transitioning full-time to the farm, she worked at a hospital in the city. The advocacy work provides her with the social time she misses through her work at the hospital. It’s also more in line with her passions.

“All of these events, I love them,” she says. “This is what gives me energy. If I can combine my passion for agriculture and my passion for people together, usually I will say yes.”

Advocacy work is essential, Dyck says. Consumers want to know where their food comes from and how it is produced, but they’re confused by slick marketing and misinformation.

“Less than two per cent of the population in Canada is connected to any sort of farm, so we have to be a loud two per cent,” she says. “We have to share our story and we love to do it.”

“It is really important for us to share our story so that consumers can make those informed decisions,” she says. “Because if we aren’t telling those stories someone else will.”