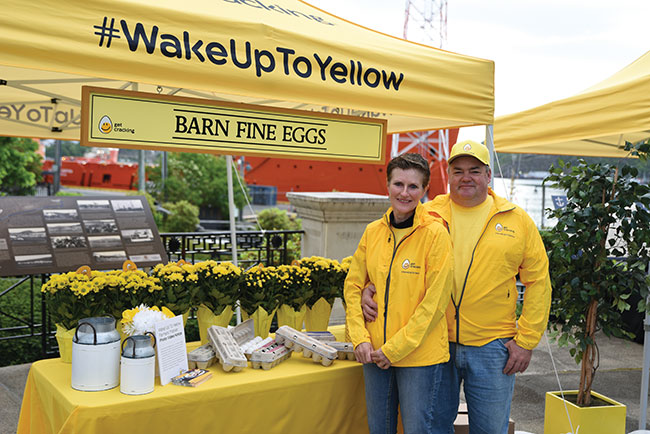 For Pauline Duivenvoorden, there is huge satisfaction in producing food, but that satisfaction also comes with huge responsibility. Farming is a noble profession, she believes, and with so few Canadians involved in food production today, it’s important for those who are to talk about what they do.

That’s why the egg and dairy farmer from western Newfoundland – she and her husband Phil MacLean farm near Deer Lake about 50 km north of Corner Brook – never misses an opportunity to talk to consumers, whether by hosting open farm day, volunteering at a fair or giving a presentation to school children.

“Having a connection to local food production and understanding the food system is really important. Any opportunity to speak to a consumer on a one-to-one basis is an opportunity that should be taken advantage of,” she says. “On our farm, we do try to embrace the local community and the broader community as much as possible by answering questions and not being secretive about what we do.”

Duivenvoorden grew up in New Brunswick and graduated from what was then the Nova Scotia Agricultural College (now Dalhousie Faculty of Agriculture). She and MacLean came to Newfoundland and Labrador after her 1986 graduation from the Ontario Veterinary College at the University of Guelph to take a large animal veterinary position with the provincial government.

After MacLean worked for local dairy farmers for several years, the couple started farming themselves with a rented farm before building their own barn in 1999. Duivenvoorden left the veterinary world in 1995 to join her husband as a full-time farmer, and a little over two decades later, they expanded into poultry through the Egg Farmers of Newfoundland and Labrador new entrants’ program.

A new venture
They now own quota for 5,000 layers and lease another 2,500. That’s in addition to a 400-cow dairy herd that is now in transition to three farm employees: a nephew and two brothers (no relation to Duivenvoorden or MacLean) who are all graduates of the Nova Scotia Agricultural College at Dalhousie University.

“With the succession plan for the dairy, we were interested in maintaining some contact with agriculture so poultry was good and manageable for us both to continue to oversee and keep us grounded,” she says. “We were familiar with supply management, but keen to learn and enter into a new venture.”

In 2016, after a year of educating themselves on poultry welfare and housing and reviewing plenty of research, Duivenvoorden and MacLean opted to build an enriched housing barn that could give birds more space and freedom to express natural behaviours. Also important was ensuring a healthy barn environment for employees.

Built for advocacy
Part of their new build included a viewing window into the barn and a camera system in the nesting boxes that lets people watch birds laying eggs. That’s because they thought people might be interested in how eggs are produced, but recognized the biosecurity limitations of opening a layer barn up for visitors.

“Fishery, forestry and agriculture are a big part of the economy here and people are fairly comfortable with those industries around them, but they are also interested and keen to know what we do and be sure we’re responsible,” she says.

Every September, they host an open farm day where they now feature egg as well as dairy production. Duivenvoorden makes school visits, especially at the elementary level, to talk to students about farming and volunteers at egg farming displays at local fairs.

They also donate eggs to the food bank in Corner Brook and sponsor a little green thumbs program for classrooms in partnership with the Newfoundland Federation of Agriculture, which provides everything a teacher might need to grow a garden in the classroom and teach students about vegetable production.

Talking poultry
Duivenvoorden particularly enjoys one-on-one chats with consumers and will strike up a conversation at the grocery store if she sees a fellow shopper buying eggs. It’s a great way, she says, to talk about food safety, the regulatory process and how important it is to have a responsible domestic food system.

“I identify myself as an egg farmer and initially they’re surprised; there are only two layer producers in western Newfoundland so they don’t know any egg farmers, but they’re kind of keen to tell me what their thoughts are,” she says.

The first question she usually gets is whether or not the eggs on the shelf are from her farm. So, she uses that opportunity to talk about traceability, for example, and how each egg carton includes a number that is specific to the farm of origin.

With North America a continent of excess when it comes to food, many people don’t know what’s involved in food production, she believes. That’s what makes those interactions with consumers important – especially at moments when she is reminded of how many people today have never been on a farm.

According to Duivenvoorden, although not every farmer might be comfortable volunteering at a fair or giving a classroom presentation, everyone can talk to someone in their day who is not from agriculture.

“The idea is not to preach, but to share a few words with someone who has questions and make sure we are able to respond to questions and concerns, myths and fallacies,” she says.

Social media is a great way to connect with people too. She interacts with consumers on Twitter, but also enjoys following other farmers for information and support.

Local food’s importance
The pandemic has made people more aware of the importance of local food production and food security, as well as underlined the importance of the supply managed system to economic stability in the farming sector, she says.

And while farmers feel the responsibility of feeding people, it’s a job she believes is no more important than that of an accountant, electrician or the countless others who keep society and the economy moving.

“Very few producers are looking for accolades; what satisfies me is that I’ve provided something that has value to the average Canadian and I don’t need praise for that,” she says. “We always say thanks to consumers – they appreciate being appreciated.”