Turkey producer works to ensure the farmer’s voice is heard. 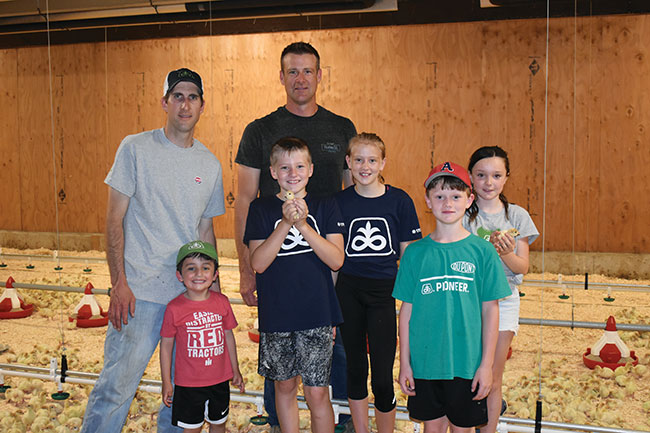 Josh Mailloux believes firmly that the farmer’s voice is a voice that deserves to be heard. That’s particularly true when it comes to taxation, land use and water issues – and it’s not always an easy task in a municipality dominated by a large urban centre nearby.

“Agriculture is important – we’ve seen empty shelves recently – and sometimes when you go to meetings, the people you speak to don’t realize what we do and how agriculture works,” Mailloux explains. “A lot of people who run government have little or no roots to the farm so you have to have a strong and consistent voice to properly convey things to them.”

Mailloux is vice president of the Essex County Federation of Agriculture (ECFA), as well as a representative on the Ontario Federation of Agriculture (OFA)’s Policy Advisory Council and a member of the local Grain Farmers of Ontario organization. He also sits on his municipality’s committee of adjustments, which deals with land use and severance issues, a responsibility he’s had for the last 12 years.

“Land use is really important to me; there’s quite a divide between rural and urban and with urban areas spreading further out, planning is important,” he says. “They don’t make more land, so it’s good to have a voice at the table.”

Turkey farming legacy
Mailloux farms in partnership with his cousin Chad near Amherstburg, south of the border city of Windsor, where they raise turkeys, grow corn, soybeans and wheat on about 1,000 acres and also have a Pioneer seed business.

And this year marks a big milestone for the family – 2020 is the 70th year since the Maillouxs first started raising turkeys on their family farm, which has been in the family since the 1870s. Whether the next generation will continue the farming tradition is yet to be seen though – Josh’s daughter is 12 and his son is nine, and Chad’s son is only three.

The farm produces three flocks of heavy toms a year, birds that weigh 16 to 17 kilograms at market weight. They are destined for further processing, including turkey strips and deli meats for large chains like Subway and Tim Horton’s.

Needless to say, the COVID-19 pandemic has had a significant impact on demand, as restaurants across the country were reduced to take-out and delivery after being shuttered to in-store dining in March to reduce the spread of the disease.

The Maillouxs also raise one flock of small hens in the winter that grow to under five kilograms. That is to keep their brooder barn full of birds year-round instead of having it sit empty for periods of time.

His grandfather Eugene played a key role in establishing supply management for the turkey sector and served as chair of Turkey Farmers of Canada in 1976. His father Bill was on the board of Turkey Farmers of Ontario and spent almost a decade as vice chair of the national organization – roles he took on after many years as an executive member at OFA.

“When Dad went to OFA, I started to farm full-time when I was just over 20 and we essentially just farmed together on the weekends,” he says. “I started on the local board in my mid-20s It was following the tradition, but I had always read a lot about what they do too and how important it is.”

Essex County is quite a diverse area that includes the nearby city of Windsor and is home to Canada’s largest cluster of greenhouse production around Leamington. For farmers in the region, urban sprawl and rural land use, rising taxes and drainage are key issues. Mailloux brings those perspectives forward to the provincial level through his participation in the OFA’s Policy Advisory Council.

“Josh is a bright young guy with a strong legacy from his dad, but he’s also his own individual who is very thoughtful in dealing with issues,” says OFA president Keith Currie. “He’s very engaged in his own operation, but he also has a lot of experience and that’s very much needed.”

According to Currie, one of Mailloux’s additional assets for a lobby organization like OFA is that his seed business gives him an agricultural retail perspective and brings him into contact with many different farmers in the area.

“We work for all farmers so we need many different perspectives,” Currie adds. “It leads to a more balanced approach to the issues and that’s what Josh brings to the table.”

Mailloux also keeps busy with plenty of local advocacy activities in his role as vice president with ECFA.

Local issues
During the last federal and provincial elections, he was part of meetings with candidates to make them aware of agriculture’s importance in the region. The local federation also hosts an annual summer tour of local farms and greenhouses for municipal, provincial and federal politicians so they can experience local agriculture first hand and receive updates on the key issues facing the sector.

He’s also often called upon by local media for his insights on agricultural issues that make the news.

Currie, for one, would like to see Mailloux become more actively involved in the organization provincially. But so far, that’s not a time commitment he’s able to make. “Farms are getting bigger and busier. We used to farm with our dads and now there’s only two of us, so it’s hard to get away, especially when you have young kids,” Mailloux says. “But it’s good to have a voice at the table on these key issues that affect agriculture.”