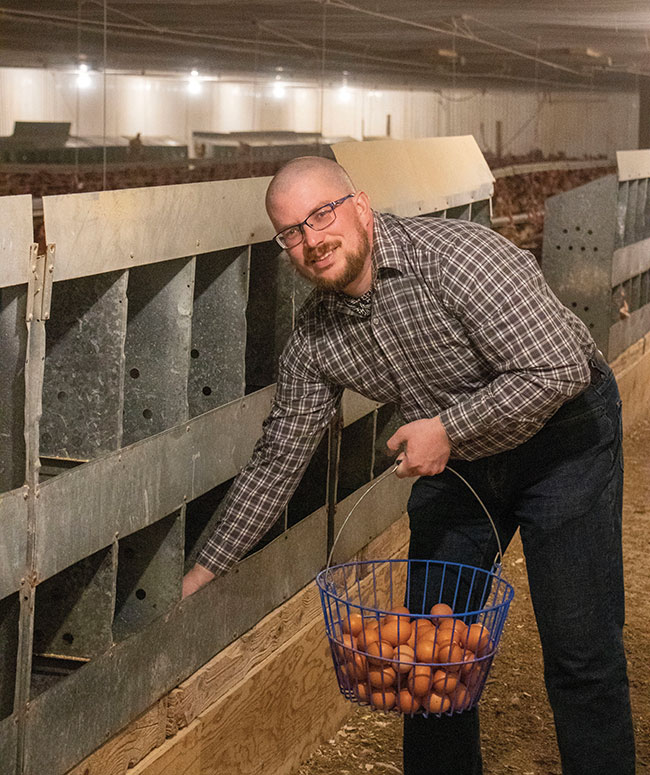 Nathan Dennis is a lucky man. At this point, he’s only in his early thirties and is already living several lifelong dreams, including commercial egg farming. He’s the proud owner of Long Range Poultry Farm in Cormack, N.L., named after the mountain range that runs along the entire west coast of the island.

Dennis was 11 when he got his first very own hens at his family’s property in Piccadilly. That’s located on the Port au Port peninsula and has a strong Acadian culture. “I always wanted a horse, my father and both grandfathers had horses to do logging, but I wasn’t allowed,” Dennis remembers. “So, I settled for two hens and a rooster when I finished grade five. That’s where it all began.”

During that time, Dennis’ flock grew to 99 birds, the limit for non-quota holders. He sold eggs to friends and family at the farm gate. Three years later, he was able to get his own horse, which then led him to start making hay for his own horse. He started selling extra to others with hobby farms. After a few years, Dennis started to make round bale haylage and silage to sell and eventually acquired a few beef cattle and some sheep. After graduating high school in 2006, the following May he registered as a farm business called Dennis Farms.

While all his farming activities kept him busy, in 2008 he started working part-time at some local dairy farms. By 2013, he was working full-time at dairies in the Cormack area and scaled back his own farming.

Egg ambitions
But Dennis had always wanted to be an egg producer and he kept his eye on that goal. In 2011, a new applicant program was launched by Egg Farmers of Newfoundland & Labrador, but Dennis was not able to apply. However, in 2016, when the association asked for expressions of interest from potential new applicants, Dennis responded.

“Then they asked me to do a full application,” he says, “and on June 14, 2017, I was out spreading fertilizer on a dairy farm I worked at and I got a call from the chair to let me know that I was accepted as the new entrant. That’s when Long Range Poultry Farm was established.”

Dennis was over the moon. His dream was happening. But at the same time, other feelings surfaced pretty fast. “It’s that moment where you can’t believe it and you’re excited,” he says, “but then panic mode kicks in and now you’ve got to put in the work and make it happen.”

Making it happen
Financing was first. Dennis went to every major bank and Farm Credit Canada. He found a manager at BMO that had relationships with the area dairy farms and understood supply management. She agreed to work with Dennis.

Next, was location. “I was looking at a piece of land and building a new barn but that wasn’t possible on the amount of financing I had available,” Dennis explains. “I knew of an empty broiler barn and they weren’t interested in selling but I was able worked out a long-term lease agreement.”

Next were renovations. It was originally a two-storey broiler barn, but it had been turned into a heifer barn and the second floor had been torn out for better ventilation. “We put the top floor back in and set up for layers on the top floor with a slatted floor, and the first floor is our manure pit,” says Dennis. “It’s nice for cleaning out. You don’t have to move feed and water lines.”

Backing up a little, on his new entrant application, Dennis had outlined how he would have a split-flock model, which would allow him to have the flow of two flocks at different stages.

He had also committed to free-run housing. There were no free-run eggs being produced on the island commercially and he thought it was a good selling point, if you will, for a new entrant to introduce something new to the market.

“I had a good friend in New Brunswick with free-run,” he says, “and during the application process, I went and got some experience in their barn. And after I was accepted, I was able to get some used equipment and that kept me in budget.”

Originally, he’d planned the layout of the barn for automated equipment, and he’s had to change the set-up in terms of where to best place nest boxes. Dennis has also added a few feedlines over the years (and right now, he’s switching from round pan feeders to chain feeders).

The layout had also been planned for expansion, so Dennis has room in the barn for 10,000 hens. “It cost more to be ready for that, but you swallow the pill up front and hope it pays off in the long run,” he says. “Once more of the debt is paid down, we’d also like to have egg collection automated because it’s time consuming.”

Egg collection for his 6,800 hens (quota for 5200 and the rest is leased) is done manually by Dennis and his dad Nicholas using wire baskets. They do this at least twice daily, and the eggs are shipped to the grading station once a week.

All Dennis’ pullets used to come from New Brunswick but he now gets half from another N.L. producer because the flock timing and pullet numbers matched up well. Feed is shipped from Nova Scotia. “Living on an island, we rely on the ferry for everything, but the majority of eggs produced here are consumed here,” Dennis says.

Dennis has moved the majority of his other farm operations to the Cormack location (except for the sheep, who live at the home farm) and he’s slowly building back the beef herd. He also grows and direct-sells market vegetables, and during some summers, he and his dad raise a few market hogs. Dennis also still feeds cows at a dairy farm about three mornings a week.

Downtime
“Something I’d like to get back into is riding horseback again,” says Dennis. “I originally started with a Newfoundland pony and then got a Morgan cross filly, Duchess, in 2004 that I trained myself for both riding and harness work. Sometimes its nice to just saddle up and go for a ride with friends, or just by yourself to get away from the daily grind.”

And when he sits down at a meal with his fiancé Jody and their two kids, Freya (5) and Nathaniel (11 months), they obviously quite often enjoy eggs. “I’ll eat them any which way possible,” Dennis says, “but fried over easy is my favourite.”