Broiler farmer and industry advocate driven by passion for improvement. 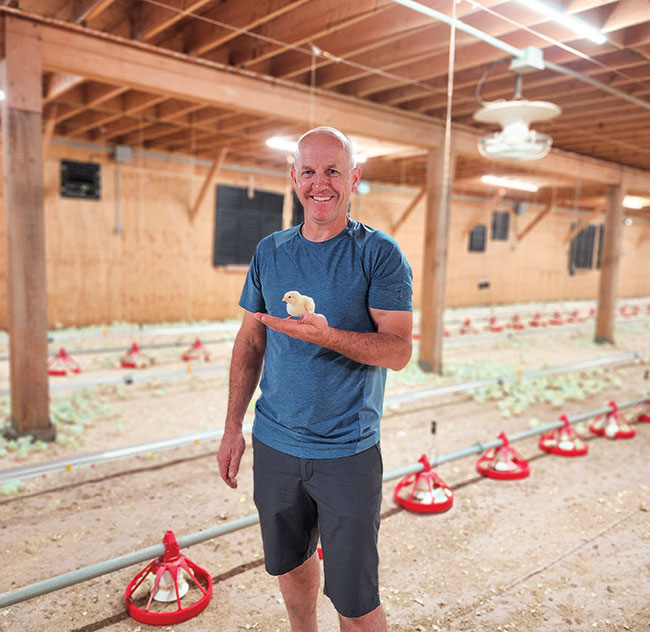 “I’m a people person,” says Cormier, a third-generation, francophone broiler producer in east-central New Brunswick. “I really enjoy meeting and talking with others so I can hear and learn about things that work and don’t work on our farms and in our industry so we can work to make things better.”

It’s that passion for improvement that continues to drive Cormier’s long and devoted service to the poultry industry both in his home province and across Canada.

And like with charity, his desire and commitment to make things better begins at home.

Cormier and his younger brother Serge produce 3.3 million kilograms of broilers in eight barns on their family’s farm in Saint-Paul, a rural parish in the heart of Acadia and a 20-minute drive from the Northumberland Strait, which separates NB and Prince Edward Island.

Their production represents roughly 10 per cent of the total annual output of the nearly 40 broiler producers in Canada’s Picture Province.

Family farm background
The brothers’ business was started in the early 1960s by their paternal grandfather, Yvon, who started raising chickens – in addition to beef and dairy cattle – in a single barn.

“It was a mixed farm,” says Cormier. “Granddad couldn’t rely solely on birds back then because there was no system in place to ensure producers could make a good living.”

Despite over-supply problems and an absence of collective planning that brought the Canadian poultry industry to the brink of collapse in those pre-supply management days, Cormier’s father Edgar partnered with his father in the farm in 1966 and led an expansion of their broiler business.

The following year, when Marc was born, they added a second barn, then a third a couple of years later when Serge was born. It wasn’t until after 1979 however, when the advent of the Canadian Chicken Marketing Agency – now Chicken Farmers of Canada – helped to stabilize the poultry industry, that the family focussed their farming activities on poultry production.

After growing up helping his father and mother, Dorine, with the family business, Marc went to community college and studied computer engineering. Though he never worked in the field, the knowledge and training he acquired proved useful when he (and later Serge) partnered with his dad in 1998.

Brothers step up
“Back then the business had four barns and produced half the number of broilers it does today,” Marc Cormier says. “But it grew quickly after Serge and I got involved.”

Within a few years, father and sons added three new barns to house the thousands of additional birds they raised under quotas bought from retiring producers.

They also built a mash mill/feed mill in the middle of the barns in 2000 that supplies feed silos at each building with feed blown in through three-inch pneumatic pipes.

The motorized silos can convey feed automatically to the feed tube and deliver it to the house at regular intervals, helping to reduce the need for manual labour.

“Sixty per cent of our production costs are feed related,” Cormier adds. “Making it ourselves ensures that our birds get the best possible nutrition. And we save money that we can use to improve other areas of our production.” 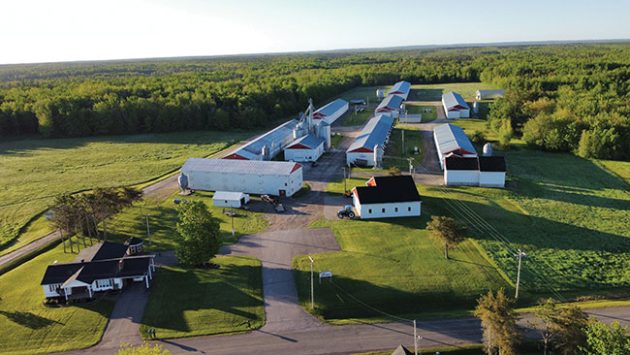 Cormier and his younger brother Serge have eight broiler barns on their family’s farm in Saint-Paul. PHOTO CREDIT: Marc Cormier

New ventures
The Cormiers also became partners with breeders in St. Leonard, a three-hour drive north of Saint-Paul, and began producing their own chicks.

They ended up buying the breeding business in 2015, though they sold it three years later to Sollio. “We still manage the property,” Cormier says. “Serge and his son François run it. So, we’re now working on the fourth generation.”

In 2007 – the year the Cormier brothers bought their family’s farm – they also purchased a five-barn broiler farm in partnership with Sollio Agriculture & Avantis Cooperative, doubling both their operations and production overnight.

“It was a nice opportunity,” Cormier says about the joint purchase with Sollio, which was then named the Coop Fédérée & Groupe Dynaco. “Sollio is a great organization and they bring a lot of technical know-how and support to the table. And I’ve always liked the coop atmosphere. It’s all about helping each other, which is great.”

Industry involvement
That same year, Cormier was elected chairman of the Chicken Farmers of New Brunswick, and became an alternative board member of CFC.He held both positions nine years, until 2016, when he became (and remains) both the vice chair of CFNB and one of the 14 members on CFC’s board of directors.

“It requires a lot of time and commitment,” says Cormier, who is currently a member of CFC’s committee of policies and procedures, which meets monthly at CFC headquarters in Ottawa.

During the pandemic, meetings were held virtually. Since December however, they have returned to being live and in-person. “I fly to Ottawa often,” says Cormier, who has gone to Switzerland for a World Trade Organization meeting. “It’s fun and energizing for me to meet other producers and poultry experts from across Canada and elsewhere and to talk about the workings and issues in our industry.”

Green focussed
Though he enjoys boating on the Northumberland Strait and camping in the Bouctouche Bay area on weekends, Cormier spends most of his time working on his farm with his wife Ginette, their adult children – Josée and Yanick – Serge’s wife Parise and four employees.

Cormier is notably focussed on reducing the farm’s carbon footprint, an effort that took a giant step forward in 2019 with the building of a new two-storey, state-of-the-art barn. “Our goal is to be carbon neutral some day,” says Cormier, who is adding an air exchanger to one of his older barns this summer – the second one to get such an upgrade.

“Being green leads to savings. And it helps to ensure that chicken remains the number one animal protein with the smallest carbon footprint – and that’s good for everyone.”