Features Producers Who's Who

Broiler producer an advocate for women in farming. 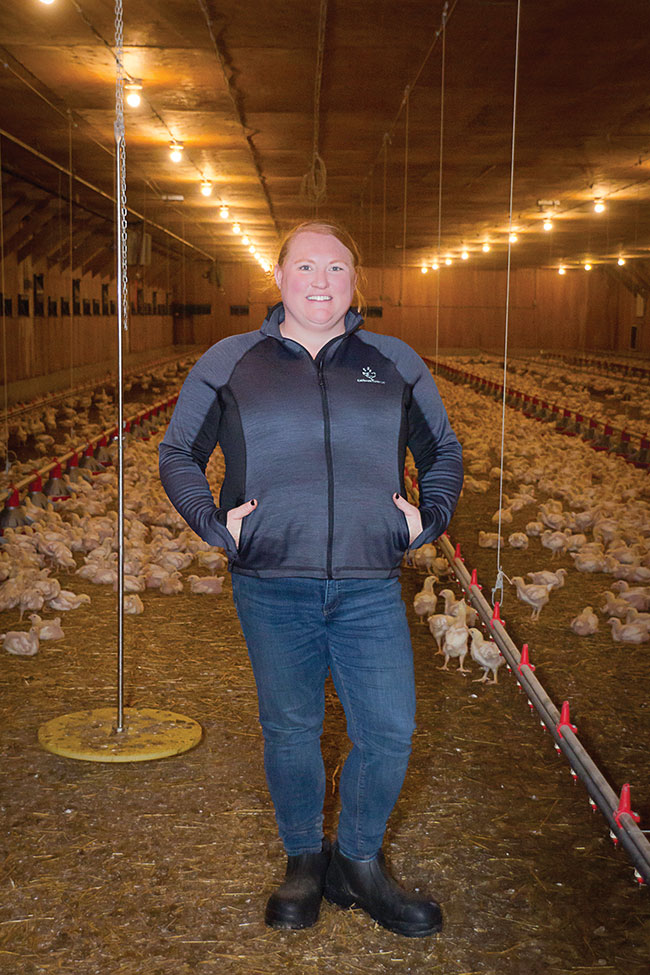 Amy VanderHeide traces her lifelong love of farming back to childhood years spent on the family beef farm near Coldbrook, N.S. As one generation removed from agriculture, she actually lived next door, but her grandmother was her before- and after-school babysitter. So, she spent much of her free time immersed in farming.

After her grandfather died, her grandmother and her aunts – who were in high school and college at the time – stepped up to keep the farm going, making the concept of female farmers doing the same work as men a normal one for VanderHeide. And that help set her on her own path to leadership in agriculture.

“I grew up in a family of female farmers and I think being with them and watching them do everything from pulling calves and making hay to meeting with suppliers gave me the attitude that I could do that too,” she recalls “To me, that was a normal role for a farm woman, and I didn’t see that it wasn’t until I was in the industry myself.”

Today, VanderHeide, her husband James and their three sons farm with her husband’s family, raising broiler chickens and growing cash crops. She’s also returned to her beef farming roots with a small cow calf farm that she and James own together.

“If you have a passion for ag, it’s hard to do something else and give that up,” she says. “I always wanted to be involved as a primary producer or working in agriculture and when I met my husband, that’s how it played out.”

Although they farm with James’ parents, VanderHeide and her husband work together as primary farm managers now, having gradually grown into that role. On the beef side of their business, the VanderHeides are equal partners, working together as the main decision-makers and sharing the workload equally.

There is no doubt that the young, headstrong woman with strong female farmer role models changed the farm dynamic a bit when she joined her
husband’s family – the senior VanderHeides, first generation immigrants from the Netherlands, were more traditional in their division of their roles in the family farm at the time, she notes.

“I shook things up a bit and I still feel  the stress sometimes more than my husband because we can interpret things differently as daughter-in-law versus son, but I respect both sides and their way of thinking,” she says.

Once her youngest son started school full-time, VanderHeide’s schedule became more flexible and as she became more involved in the agriculture sector, she became the face of the farm in the industry. Initially, she stepped forward to accept volunteer positions with organizations because she saw them as a good way to learn more about the industry, but now she’s proud that increasingly, the organizations are coming to her to seek her involvement.

VanderHeide is the treasurer of the Kings County Federation of Agriculture, as well as a director with Chicken Farmers of Nova Scotia and the Do More Ag Foundation, and co-founder of the Maritime Ag Women’s Network. Outside of agriculture, she chairs the local school advisory council and serves  as a director on the board of a nearby day care.

“I always look for what I’m going to get out of it (a position) and what can I contribute,” she says. “I’m in my third term with the local federation of agriculture which represents all agriculture in the county. I wanted to meet more farmers and make more connections; it was my big jumping off point and it just kind of grew from there.”

Until April 2022, she was the president of the Chicken Producers’ Association of Nova Scotia before being elected by her fellow broiler producers to be a director on the Chicken Farmers of Nova Scotia board – the only woman in the group. According to VanderHeide, it’s this role in particular that lets her contribute to ensuring a future for her children in the industry if they want it. 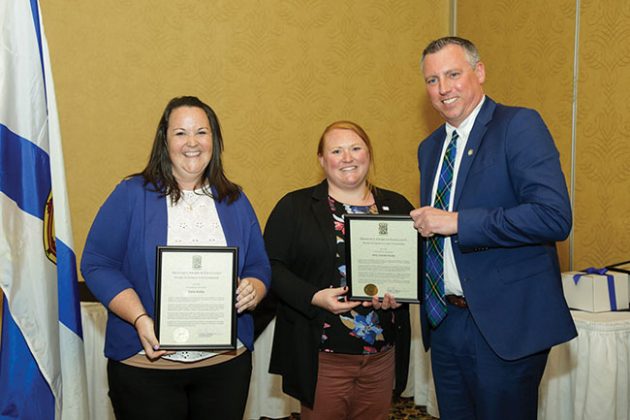 VanderHeide (middle) and Katie Keddy were recently recognized with a Minister’s Award of Agricultural Excellence for founding the Maritime Ag Women’s Network.

She also feels strongly about her involvement with the Do More Ag Foundation and its mental health mandate.

“Mental health is so important to me so I jumped at this opportunity pretty quickly when it came up. It’s a great foundation for reducing the stigma and raising awareness of mental health in agriculture, as well as providing resources and research to “do more” for the industry. Where things are so engrained in agriculture with that traditional way of thinking, all of these things are important to making the mental health conversation a normal one within the industry” she says. “That’s been my passion project and it’s something we all need to recognize.”

VanderHeide is also justifiably proud of the Maritime Ag Women’s Network that she co-founded with Katie Keddy, a fellow female farmer in the Annapolis Valley, after they both attended the Atlantic Farm Women’s conference in 2015 – an inspiring and much-needed weekend away for two young farmers who had young children at home. The vision for the network grew out of a desire to help farm women who are often isolated by farm and family stay connected and have access to like-minded support, and what started with 15 members has now reached 1,200 across the four Atlantic provinces.

VanderHeide and Keddy’s efforts in starting the network have unintentionally given both of them a leadership role in the industry and they were recently recognized with a Minister’s Award of Agricultural Excellence.

“It was great for us to be recognized but it’s also a peer nominated award, which is quite humbling and having it means so much recognition about what women contribute to agriculture,” VanderHeide says.

Looking ahead, she sees herself continuing to take on new leadership roles with the organizations she’s already involved with, as well as balancing that with her work on the farm and time for her family. She’s also currently enrolled in the Chicken Farmers of Canada young farmers program, which has given her some aspirations for serving with that organization’s national board in the future.

It’s an exciting time for women in agriculture, she notes, as many more are entering the industry in diverse roles ranging from primary production to accounting, research and extension services and she believes its advocacy like hers that is helping to remove barriers that have kept women from the sector in the past.

“We know that childcare is a huge barrier for women in agriculture with families, for example, and the more we talk about things like that, the more people step up to say what they need,” she says. “And as we give more recognition to the work women traditionally do in the background to make a farm successful, like doing bookwork, and the other skills that the industry needs, the more it’s opening up a world of opportunity.”

“My biggest advice is to be comfortable being uncomfortable; you will learn so much from that,” she adds. “Don’t be afraid to step up, go do something and find your feet.”