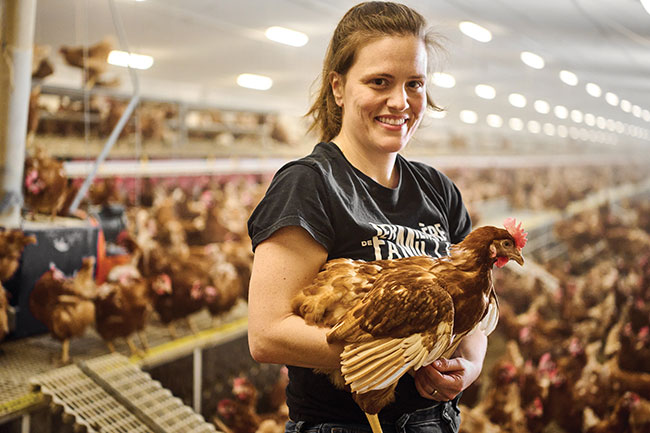 The road of life sometimes leads us back to where our journey began – only richer from the knowledge, experience and insights we acquire along the way.

Take Pascale Mageau-Béland. Fifteen years ago, she left her parent’s egg and poultry farm in Plaisance, a rural village on the Quebec side of the Ottawa River, to study at Montreal’s Polytechnique, one of Canada’s top engineering schools.

She graduated a decade ago and has lived and worked in Montreal since then as a process engineer in the mining and metal industries for Canadian project management and engineering giant Hatch.

“Returning home and getting involved in the family business was not something I was thinking about when I left,” Mageau-Béland says. “And I love working as an engineer and living in Montreal.”

But five years ago, love for the rural life and a longing for a new challenge with her life partner away from the big city led Mageau-Béland back to Plaisance, a 90-minute drive northwest of Montreal.

And with the help of her family, she and husband Marc-Oliver Huot-Drouin are building an innovative organic egg production business that they run mostly remotely from Montreal as a sideline to their professional careers while living in the city – for now at least.

“There are definitely challenges with being remote,” Mageau-Béland says. “But we go to the farm with our two daughters every chance we get. We all love it there.”

The 400-foot-long, 40-foot-wide building notably features nesting boxes in the middle with inclined floors and a hidden conveyor that collects and carries eggs to a gathering room where they are handled and put in trays.

Birds also have access to a large fenced-in outdoor yard that is nearly twice the size of the barn from May to October.

Most of Ferme Pascale et Marco’s egg production is bought by Lyn, Ont.-based Burnbrae Farms, which makes weekly pick-ups at both Mageau-Béland’s barn and her family’s farm, which share connecting fields.

“Feed and water are automated and everything is connected online – like bird weight, food and water consumption or if a fan that’s not working – so we can monitor things from a distance,” Mageau-Béland says.

“We have an employee who checks up on the birds’ health and well-being, picks up eggs, changes and piles trays and cleans up broken eggs,” she adds. “We’re on the phone everyday with the employee and my dad. But it’s a bit stressful having to rely on others. And sometimes I just have to drop everything and go there myself, like when we had a small fire in the barn from an electrical short near a water line.”

Leaving the big city
That’s part of the reason why she and her Marco and now planning to move to Plaisance full time next year and work remotely as engineers, commuting when necessary. “Being at the farm everyday will alleviate a lot of the stress,” Mageau-Béland says. “And it’s a great place to raise our two young daughters.”

They also now plan to acquire her father’s egg business, which includes 12,000 laying hens and 8,500 pullets, which are raised in a new barn built in 2020, and a small rented quota for turkey.

“Our operations are already quite integrated,” said Mageau-Béland. “Our employees – one fulltime, two part-time – already work at both places.”

She and Huot-Drouin also plan to one day transform her father’s conventional egg business into an organic one.

“We’re currently studying that,” she said. “It would take some doing but it’s not impossible.”

Coming full circle
The move will also help bring her poultry farming life full circle. The oldest of four children, Mageau-Béland was born and raised on a small farm near Quebec City, where her grandparents and her father Nil Béland had a broiler business with 25,000 birds.

According to Mageau-Béland, her father sold his parents’ farm and used the money to buy an existing egg farm in Plaisance, close to where her mother, Chantale Mageau, is from.

“It was tough moving,” recalls Mageau-Béland, who at age 14 left friends and family behind for a new life in Quebec’s Outaouais region.

The family’s new farm there had a one-storey, conventional barn with first 9,000, then 12,000 laying hens. Nils Béland, who is also an agronomist, also landed some turkey quota.

Like her siblings, Mageau-Béland helped on the farm. But like her, they too left home for post-secondary studies: her two sisters becoming engineers like her, their brother a classical musician who is now studying law.

Mageau-Béland met Huot-Drouin at Polytechnique Montréal, where he was also studying chemical engineering. The two started dating and were soon making trips to Plaisance to visit Mageau-Béland’s parents and help out around the farm. “Marco didn’t grow up on a farm, but both of his parents did, so he was used to them,” Mageau-Béland says. “And like me he loves being on farms.” 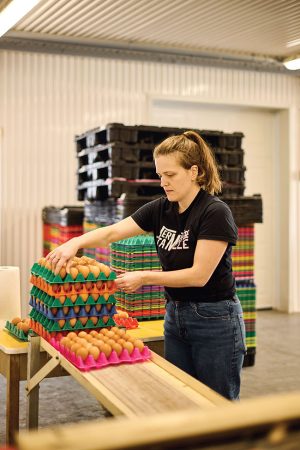 Mageau-Béland manages the barn remotely with the help of staffer while working as an engineer in Montreal. PHOTO CREDIT: MOM STUDIO & IMAGE INC.

A new challenge
With steady incomes, no kids and millennial generation values that put a premium on healthy foods and collaborative, technology-driven industry, the couple started searching for a business opportunity they could partner in.

“We were looking for a project that we could build together,” Mageau-Béland says. “We’re both environmentally minded – especially when it comes to food, particularly organic foods – and engineering ties in beautifully with the food industry. So, we soon came up with the idea for an organic egg farm.”

Her father, she adds, was in the midst of thinking about the succession of his own egg business – Ferme JL Béland – when she and Huot-Drouin shared their embryonic idea with him in 2017.

“Everything changed for him and us after that,” Mageau-Béland says. “He offered to help us financially and physically to build our own farm next to his – and that’s exactly what happened.”

The first step, she adds, was to decide the kind of egg production they wanted and to figure out if and how they could take care of the birds remotely.

“There’s a long list of things you have to do and respect in order to be certified organic,” Mageau-Béland says. “A big difference is space. Our barn and yard have a maximum capacity of 8,500 birds. If we were free range, we could have 14,000.”

Another big consideration was feed, which must be made from organic grains that are grown without the use of pesticides and herbicides. “It costs basically twice as much,” Mageau-Béland says about organic chicken feed, which they buy from a local supplier.

After buying land and getting quota transferred from her father in 2017, Mageau-Béland and her husband dove into the planning for their state-of-the-art barn. As it was being built, the couple welcomed their first child, Florence, into the world in April 2018.

Growing in lockstep
Since then, the couple’s family has grown in lockstep with their egg business. By the time their second daughter – Simone – was born in October 2020, Florence, now four, was already helping in the barn.

“At first she was scared being in the midst of 8,500 chickens,” Mageau-Béland says. “But now she’s very comfortable being in the bar and loves going there to pick up eggs. And she’s the best at removing feathers from them and at finding the cracked and broken ones that we keep to eat.”

Giving back
In addition to their business with Burnbrae, the couple also sells eggs locally through Racines Rurales (or ‘rural roots’), an organic farming cooperative in the Outaouais region with a half-dozen members of young producers who produce weekly organic basket.

“It’s a nice local initiative,” says Mageau-Béland, whose husband is a group board member. For her part, she is becoming involved with the Fédération des producteurs d’oeufs du Québec, which represents the 165 egg farmers of all stripes in la belle province.

“I like what the federation does for producers,” says Mageau-Béland, who also participated in the Egg Farmers of Canada’s national young farmer program in 2020. “I want to help it make our industry even stronger.”