Features Producers Who's Who

A self-made man with a passion for people and poultry. 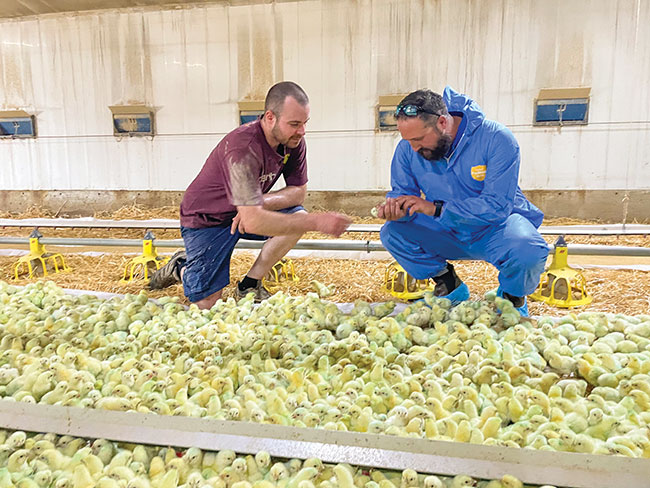 As director of farm operations with Prairie Pride Natural Foods, Sandy Zerebeski (on the right) liaisons between the processing plant and poultry farms throughout Saskatchewan. PHOTO CREDIT: Sandy Zerebeski.

When Sandy Zerebeski started working in Saskatchewan’s poultry sector in 2005, he had absolutely no experience. While there are grain farmers in his extended family, he grew up in Saskatoon surrounded by more people than poultry. Yet, today, his combination of true passion and hands-on experience makes him one of the province’s most sought-after poultry experts.

Zerebeski has been working at Prairie Pride Natural Foods since the company first broke ground in late 2005. Within six months of starting as a live haul driver, the company promoted him to supervisor, entrusting him to manage live haul operations. Zerebeski held this position for two years.

During his first years with the company, Zerebeski started doing field service work. If producers had issues on-farm, he would walk their barns and try to find a solution. If birds needed to go to the lab for diagnostics, Zerebeski was the one to take them.

After two years in live haul operations and field service work, Zerebeski moved into Prairie Pride’s hatcheries, where he managed flocks for three years. From the hatchery, he moved into the company’s federally inspected processing plant and took over the live haul side of the business as logistics manager. On average, the facility processes 60,000 broilers each day, five days a week.

Later, Zerebeski started working on the company’s corporate farms as an on-farm manager. In that role, he is responsible for purchasing equipment and working with the manager to improve production. Prairie Pride has five corporate farms that raise broilers. They had raised turkeys for 14 years but sold their quota two years ago.

Since 2010, Zerebeski has been based at the processing plant. He continues to offer field services to Saskatchewan’s many poultry producers, both those who work for Prairie Pride as well as those who don’t.

Turning heads
Jasmine Crump, nutrition and production consultant at New-Life Mills, has watched Zerebeski’s career blossom over the years. She is impressed by his strong work ethic and the connections he’s made within the industry.

“I think that’s what makes him so influential,” she says. “Because he started just truck driving. He knows all the live haul. He knows the feed trucking side of it. He knows every step of the way.”

Crump attributes the success of Saskatchewan’s raised without antibiotics (RWA) program to Zerebeski as well. It’s his poultry knowledge and hands-on experience that has made it a success, she says. Crump points out that Zerebeski is not only knowledgeable but also self-taught.

Hands-on learning
Everything he knows about barn management and bird welfare comes from hands-on experience. As an example, Crump pointed to Zerebeski’s discovery that birds grown under RWA programs were found clustered in the feed pan.

Under RWA programs, cocci vaccines are an important management strategy, and to do this 35 per cent litter moisture needs to be maintained to help the cocci vaccine cycle.

While managing one of the Prairie Pride Farms, Zerebeski noticed the birds huddled in the pan and realized the litter was too cool. “Even though the temperatures in the barn told us everything was fine, the birds were telling us that it wasn’t,” Zerebeski says.

Crump said the realization was an important one, as adjusting the temperature got the birds out of the feeding pan and back onto the litter.

“That really has changed how we grow birds out of Saskatchewan for RWA,” Crump says.

Liaison work
Working in the processing plant has given Zerebeski an added edge as well. Part of his job is to review condemn reports. The most common condemn at the Prairie Pride processing plant is cellulitis, often caused by infected scratches.

But producers can receive condemns for other issues, including lighting and ventilation infractions. Higher condemns serve as red flag and often warrant a call to the producer. The aim is not to chastise them for wrongdoing but to assist them in improving management practices.

Most problems are caught early, though, as Zerebeski hosts a weekly chat with producers where they talk through potential issues and how best to resolve them. It also keeps producers within the sector connected.

“I try to keep that line open so that they know if they’re having an issue, they can reach out to one of their fellow managers,” he says. “It doesn’t always have to be who gets the call. They can talk with each other and work as a team.”

Sharing expertise
Beyond management, Zerebeski has helped build some of the company’s corporate barns, as well as those of producers outside of the company, offering advice on equipment, suppliers and builders.

Once built, he helped new producers settle in, showing them what works and what hasn’t. He’s knowledgeable, for instance, when it comes to lighting programs, having worked closely with University of Saskatchewan researcher Karen Schwean.

He also helped develop a half-house brooding system that keeps young birds together in one half of the barn for their first four to seven days. “It gets them on feed faster by giving them less room to wander,” Zerebeski explains. “If the bird is on feed right away, it’s going to get a better start. It’s going to start growing faster, it’s going to be healthier.”

Passion for poultry
Deeply humble, Zerebeski doesn’t see himself as innovative or special. Yet, the importance of his role in Saskatchewan’s poultry sector cannot be underestimated. Crump says what makes him stand out is his passion.

“He works tirelessly some days to get it done,” she says. “If someone needs help, he’s the first one there. He’s passionate about what he does and he loves the producers in the industry.”

Zerebeski doesn’t know where his career will take him next, but he says he’s open to new challenges. “I don’t know what’s going to come in the future,” he says. “You never know, things seem to be changing all the time. But I’ll be looking to adapt to whatever comes next.”

Related
Preparation Pays Off: When AI was found on a Saskatchewan breeder operation, the industry was ready
Saskatchewan Regains Market Access to Taiwan for Poultry and Poultry Products
Saskatchewan “We Care” Billboards
Poultry plant CEO reacts to calls for rapid testing, slower production