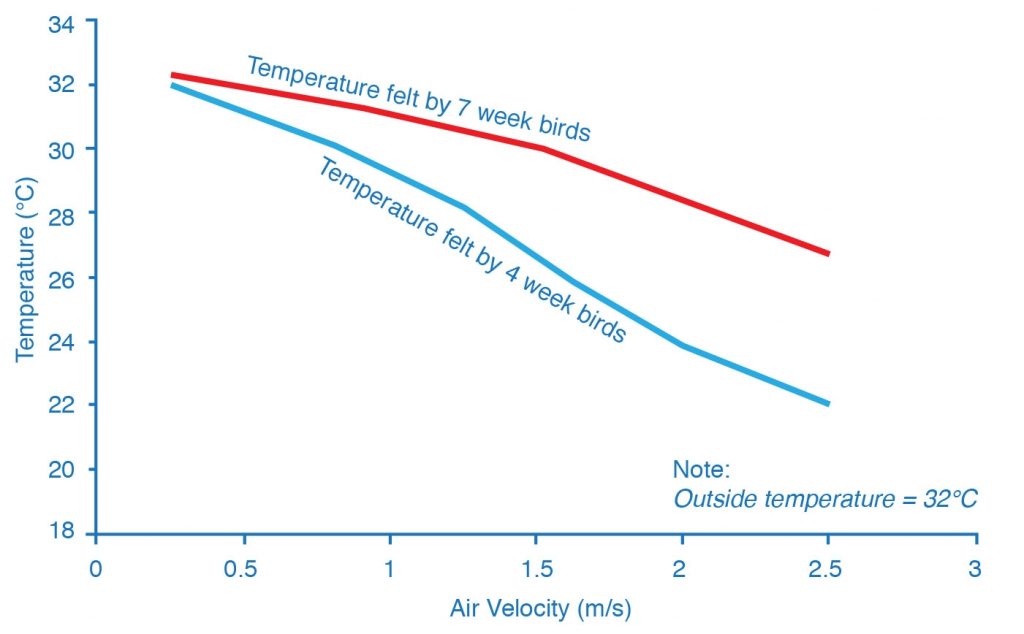 A broiler that is eating just to keep warm is burning off calories for warmth instead of putting on body mass.

Broilers in Canada, for those who don’t know, are almost exclusively raised on litter floors. In other places in the world you can find broilers raised in cage systems. Floor raised birds tend to have less breast meat bruising and damaging when compared to caged birds and this, and pressure from animal rights activists, is why it tends to be the preferred method in Canada.

We know that when a bird is cold, feed conversion is poor. In humans, weight gain is a simple formula. Calories in minus calories burned is what affects our body weight.

In similar fashion, a broiler that is eating just to keep warm is burning off calories for warmth instead of putting on body mass.

Intense heat also has a negative impact on broilers putting on weight. Intense heat causes the birds to drink more, which fills up their stomachs and as a result they eat less. Fewer calories in equals less weight gained.

So, how to cool the barn down during periods of intense heat? Let’s talk a little bit about wind chill and the affects it has.

First of all, calculating wind chill is not an exact science. We are talking about a “perceived” temperature – how warm or cold that it feels as opposed to what the thermometer says. Secondly, wind chill isn’t necessarily linear. A wind speed of two meters per second doesn’t always deliver an exact temperature drop.

The starting temperature and the relative humidity also have a role to play.

Fourthly, the age of the birds also plays a role – smaller and younger birds become chilled sooner than the bigger, older birds.

Ross (Aviagen) has a simple chart in a 2010 manual they put together for broiler producers called  Environmental management in the broiler house.

Finally, bird density plays a role. Most wind chill calculations are done in a lab with one or two test subjects. So, the wind can go all around their bodies. In densely packed barns, the air flow may be more restricted and could limit the effect of the airs cooling.

It’s also important to know that wind chill on birds is different than wind chill on humans. Back in 2001, Environment Canada held a symposium to create a standard on wind chill effect on humans. They wanted to see what the effect was on faces in particular. This is important to remember when going over wind chill charts because people don’t have feathers on their faces (at least as far as I know).

Watching the effect your ventilation system is having on your birds is truly the only way to understand how effective it is. All the factors mentioned above show that calculating wind chill can be a bit more of an art than an exact science. Every year, every season and every flock will be a bit different. It takes time to gain the experience to “tune” in a barn’s ventilation system.

One of my favourite business book authors is John Maxwell, who wrote a book titled Sometimes you win, sometimes you learn.

Just remember that if this past flock didn’t perform the way you wanted it to, it was an opportunity to learn for the next one.

Ben Kaiser is a master gasfitter and master plumber. He works with his father Martin and his three brothers at Kaiser Ag and specializes in poultry barn construction and installations.