The latest research around chicks and water usage. 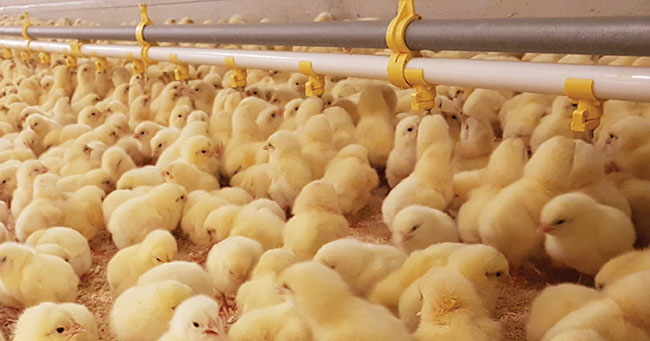 There is a school of thought that a cool drink of water is much more enticing to chicks than a warm one.

Modern commercial poultry is often cited as beginning about 100 years ago with a small flock of 500 birds in the U.S. state of Delaware. Who would think that after a century of raising commercial poultry we would still be learning from the birds themselves what helps them thrive?

Our advancement in technology and the increasing ability to control and monitor the birds’ environment allows us to dig deeper than ever before into what helps them perform. Out of the hundreds of research projects done every year, there are a few that still provide insight into the drinking habits of the modern bird.

Let us focus on the beginning: brooding.

Warm or cool?
Most of us were taught that when preparing for the arrival of chicks or pullets we are to fill the water lines with fresh, clean water a few days before the flock’s arrival then allow it to warm up along with the barn and litter. The theory is that since chicks are unable to regulate their own body temperature those first days, having water that does not chill them is ideal.

However, there is another school of thought that a cool drink of water is much more enticing than a warm one and that cooler water will increase water consumption, a goal for which we strive since it goes hand in hand with increased feed consumption.

This alternative school of thought was the subject of research by Christopher Eagleson, Susan Watkins, Tyler Clark, Malea Frank and Antonio Beitia at the University of Arkansas.

Cyclical activity
Another interesting study that shed light on water usage by chicks was done by Brian Fairchild, Mike Czarick and PhD student Connie Mou at the University of Georgia. The researchers focused on both the circadian (24 hour) cycle and the activity cycle of chicks their first week of life.

The group observed that chicks have a strong circadian (24 hour) rhythm during the first week of brooding, even when there is continuous light. This pattern did decrease as the chicks aged.

However, along with this natural circadian rhythm, the chicks also exhibited a strong but shorter activity cycle.  A few hours after placement, they began to eat and drink all at the same time followed by a period of rest. The cycles tended to last between 30 and 60 minutes and grew stronger as their first week of growth progressed.

The Georgia research group described it as a wave of chicks that come to then leave the feed and water lines.

In the first full day, the wave only lasted about 30 minutes, with water consumption increasing by three or four-fold over a 15-minute period, then decreasing the same amount the next 15 minutes. By the end of the week, there was a seven-fold variation in water usage from the lowest point to the highest peak that tended to progress through 45-minute cycles.

Even though this pattern tends to decrease over the life of the flock (probably due to the fact that space at the feed and water lines becomes limited), it is important to note that this cyclical activity behaviour will cause a larger demand (up to a seven-fold increase) on the drinking system at one time. It benefits our birds and, thus, ourselves to ensure that our drinking water systems are in optimum working order to facilitate this natural cyclical flock activity.

Perhaps nature still has a thing or two to teach us.