Would Your Farm Survive an Undercover Video?

Doing what is right, even when no one is looking 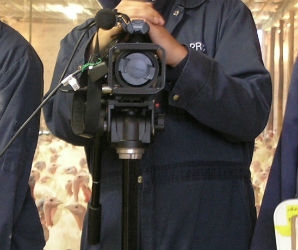 April 16, 2014 – In a recent webinar hosted by the Centre for Food Integrity (CFI), CEO Charlie Arnot posed an interesting question: Would your farm survive an undercover video? While you might think the answer to that question depends on what is depicted in the video, it doesn’t. It’s true; while we know that there’s no substitution for quality farm animal care, how quickly public trust is restored actually depends on the industry’s response to the video – not what’s contained within.

To determine how consumers would react in given situations, CFI gave participants one of four fictitious news releases. Two of the news releases involved similar food safety crises, both resulting in deaths. The other two involved the mistreatment of animals.

In each of the paired stories there was a “bad actor” and a “good actor.” When confronted, the bad actor didn’t respond well. In fact, they showed a callous disregard for public concern, lacked transparency, and were intentionally misleading when asked about employee training. Unwilling to accept responsibility for their actions, they put profit before public interest, and were even seen to blame the activists who shot the video.

The good actors behaved quite the opposite, though. Not only did they demonstrate transparency, but they were also sensitive to public interest and diligently followed up on best practices. They showed a willingness to accept responsibility for their actions, and demonstrated some level of transparency.

After reading the news release, participants were asked to rate their “actor” based on competence, confidence and trust, as well as their likelihood of resuming purchase. Not surprisingly, on a scale of one to ten, participants gave the bad actors low ratings – all below four – whereas the good actors all received ratings above six. What does this mean? It means that what matters to consumers isn’t so much what’s in the video, but how it is dealt with afterward.

To avoid being the subject of an undercover video, Arnot recommends implementing hiring guidelines. He warns against hiring employees who don’t have any previous experience in agriculture or someone who is new to the area.

“Frequently, you can find out a bit about someone’s background by simply doing some fairly easy online searching,” says Arnot. “We worked with a farm that had been the target of an undercover video and they had a policy of doing some online searching before they hired, but had gotten busy or overwhelmed or for whatever reason didn’t complete that process.”

The person who had done the recording, says Arnot, was very transparent about who she was, what she did and her affiliation with the animal protection organization. She didn’t try to hide it and she didn’t go by an assumed name. In short, the situation was one that could easily have been avoided.

The next, and perhaps more obvious way to avoid becoming the subject of an undercover video is to adhere to the Code of Practice for the Care and Handling of Beef Cattle.

The line that people are concerned about industry crossing is not looking after the animal’s best interest in exchange for economic gain, says Arnot. “If you’re doing something that is not good for the animal, but it’s good for your pocketbook, that’s where the public really begins to become incensed.”

Developed by the National Farm Animal Care Council (NFACC), the Codes of Practice are national developed guidelines for the care and handling of farm animals. They include both animal care requirements, as well as recommended practices. The Codes promote a number of things, including welfare practices for housing, transportation, care and other animal husbandry practices. It also promotes sound management.

To assist producers in providing quality care for their farm animals, Farm & Food Care Ontario offers a helpline service. The Helpline was developed back in 1992 when it was realized that an issue with a hog farmer could have been dealt with better.

A typical Helpline call is received at the Farm & Food Care office. Sometimes the caller’s concerns are addressed right over the phone. If not, their information is recorded – name, location and number of animals involved – and it is passed on to the appropriate commodity organization. The caller’s name is kept completely confidential and never leaves the desk at Farm & Food Care.

With respect to beef cattle care concerns, says Kelderman, that information is passed on to the Beef Farmers of Ontario, who then send out one of their credible and trained representatives to meet with the farmer to address the complaint. So far, the Helpline has been very successful. They receive the bulk of their calls in fall, winter and spring, and for the most part, they come from people within the industry. Most farmers, says Kelderman, are receptive to the help they receive.

In Ontario, there is no formal system in place for addressing undercover videos, says Crystal MacKay, Executive Director at Farm & Food Care. If and when the need arises, industry works together, providing leadership from all fronts. Currently, Farm & Food Care is developing crisis communications workshops for 2014.
The workshops take a whole-sector approach, where farm leaders work with supply chain partners to figure out what they would do if their sector were targeted.

“Some of the things we do may not be very visually appealing, I understand that,” she says. “But ultimately they are in the best interest of the animal. [It’s about] making sure that we provide the best environment possible.”