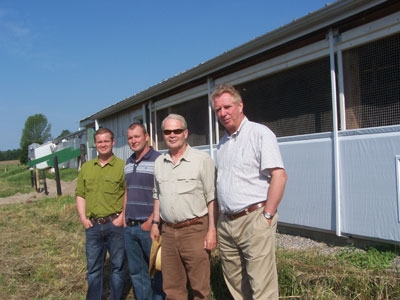 The story of Yorkshire Valley Farms – the largest and fastest-growing organic poultry business in Canada – is a tale of true synergies. The parties involved all brought unique strengths to the table that are needed for business success, making the sum much greater than its already impressive parts. Tony Ambler, a cash crop, beef and conventional chicken farmer near Peterborough, Ont., with long-term experience in a large manufacturing company and a keen interest in sustainability, was looking for new challenges after the BSE crisis. Down the road from his farm was Tom Ahrens, a master organic crop and beef farmer with many years of experience, and an interest in expanding his acreage. His son Nick, also an experienced organic farmer, was keen to continue some sort of organic farming that would support his new family. Also just down the road was a neighbour, Ian Anderson, sporting many varied skills he’d gathered over a career in marketing and public relations – and attracted to being part of a cutting-edge venture.

A Company is Born
In 2009, discussions began among Tony, Tom and Ian, and serious plans to produce organic chicken – and eventually turkey as well – quickly took root. There were tours of organic poultry farms south of the border to learn about natural light and ventilation solutions, in addition to other aspects of organic poultry farming. A company, Yorkshire Valley Farms, was formed, with themselves as the three co-owners. In 2010, Tom had his organic chicken barn built (two cycles, 15,000 quota), and Tony renovated his broiler hatchery barns to accommodate four cycles of organic birds (30,000 quota), while also keeping his nearby conventional operation. Another producer has 15,000 quota. In December 2010, the first Yorkshire Valley chicken hit Loblaw store shelves.

Getting a Market
But the road that got them to that point involved a few more steps than barn renovations and raising new chicks under organic guidelines. “From the start, we had a very different focus than what is found in traditional organic marketing,” notes Anderson. “We are aiming to provide organic poultry to as large a market as possible, rather than doing on-farm sales or selling at specialty shops or farmers’ markets, which is how most organic farmers sell their products.” Yorkshire Valley approached Loblaw (Canada’s largest food distributor) in late spring 2010 and found the company’s poultry buyer, Glen Halfyard, tremendously supportive. “I can’t say enough about the support he’s given us,” Ambler says. “He did everything he could to help us, including liaising with the processor and coming to meetings with the Chicken Farmers of Ontario (CFO). In doing this, Loblaw became the first grocery chain to get into organic protein in a big way.” (Loblaw has also taken other actions related to sustainability, such as a 2009 commitment to purchase all seafood, wild and farmed, from certified sustainable sources by the end of 2013.) The aim from the start was to have Yorkshire Valley products available in Loblaw and speciality stores provincewide and beyond, but “right now we can’t fill the demand,” Anderson says.

Processing
Yorkshire Valley also found a strong friend at Maple Lodge, a processor that supplies Loblaw and has federally inspected plants – a must in order to ship products across provincial borders. “Jack May, who has operated Maple Lodge for decades, is a visionary,” says Ambler. “He threw his support behind us and that allowed us to proceed.” For a task like organic processing – which involves cleaning the equipment beforehand with approved cleaners – a processing plant needs a sufficient weekly volume to make it worth their while. Yorkshire Valley ships a minimum of 7,500 chickens per week to Maple Lodge’s 24/7 plant in Brampton, and that processing takes 40 minutes.

“We were able to show Loblaw and Maple Lodge that we had the agricultural acumen and business acumen, all the skills it would take to make this work,” Anderson says. (There are more than 10 other companies that Yorkshire Valley Farms either already supplies or is in discussions with, including an organic baby food manufacturer.) Ambler adds, “We convinced them that this is a new product with a new market. We believe that new customers who wouldn’t have eaten chicken at all will eat it now that there is a product that is raised organically, with more room and more natural conditions, in addition to the organic feed and health-care standards.” Customers are welcome to visit, notes Ambler, and quite a few have done so.

Expansion is ongoing. A third grower in the Kitchener area is on board, as well as a turkey grower. “We plan to have 4,500 turkeys available for Thanksgiving and 4,500 for Christmas at Loblaw,” says Nick.

For these men, having created a successful organic poultry business was worth the risks and the headaches, and they’re extremely proud of what they’ve accomplished. “We’re producing the healthiest and highest quality product on the market, and we offer the consumer full transparency with no middlemen involvement,” says Nick. “Farmers are important, which is an idea that more and more consumers take to heart.” Ambler adds, “Yorkshire Valley is a farm-level brand owned by farmers, and not a multinational, so that also builds trust and integrity. “We are also local, and we always want to be local,” says Anderson. “That’s important to consumers and important to us.”

Check out next month’s magazine for more on Yorkshire Valley Farms, and learn about the challenges faced when growing chicken organically.