North Carolina State University (NCSU) is the only remaining venue in North America at which comparative testing of egg laying stocks takes place. At one time in the mid 1960s, there were more than twenty locations in the U.S. and Canada where Random Sample Laying Tests were conducted. Instead of abandoning testing altogether, NCSU chose to superimpose a variety of management systems, cage sizes and configurations on top of the strain comparisons.

In the 39th test, stocks were exposed to the following: conventional cages, enrichable cages, enriched colony housing, cage-free and range.

Summaries of the data were prepared from 119 to 483 days of age. The flocks were then moulted and data was again summarized at 763 days of age. Only the first cycle (to 483 days) data are reviewed here.

Comparing the cage densities showed that in white-egg hens housed at 774 cm2/hen, feed intake was higher by 10 g/bird/day, eggs per hen housed was higher by 7 eggs/hen and mortality lower by 0.86%.

Comparing the strains is complex. Table 1 shows some key data for all 12 white-egg strains tested. Feed intake varied from 96 to 110 g/hen/d. This is, of course reflected in the feed cost data. The strain with the lowest feed intake (Hy-Line CV26) also had comparatively low egg production and egg weight, and thus low value of eggs minus feed. However, the strain with the next lowest feed intake (Shaver White) had much higher egg production, modestly higher egg weight, and very favourable value of eggs minus feed.

Egg weight was also quite uniform. The average of 60.1 g/egg leads to size categories of approximately 63% extra large, 22% large and 8% medium. For each 1.0 g increase in average egg weight, approximately 5% of the large size move to extra large. In the test situation, extra large eggs were priced approximately three cents per dozen more than large. In most Canadian situations, this premium does not exist. However, when egg weight falls 1.0 g below average, the number of medium size eggs increases two to three per cent, which causes a significant financial penalty.

Turning to the nine brown-egg strains, the first thing to note is the difference in performance between the two cage densities. Brown-egg hens given more space (774 cm2 versus 445 cm2) consumed 11 g more feed/d, and laid 16 more eggs/hen housed. Mortality was 2.5% less in the larger space, although this difference was not statistically significant. The data, when combined, showed an extra $1.00 in egg value minus feed cost for the higher space allowance. For the white-egg strains, the difference was only $0.28.

The brown-egg strains feed consumption varied from 103 to 110 g/hen/d, and hen-housed production from 304 to 314 eggs. Few of these differences were statistically significant. With one exception, the values for egg income minus feed cost were also quite uniform. One is impressed by the relatively small differences between the white and brown-egg strains in these comparisons. Feed intake was actually lower among the brown-egg strains; egg numbers and egg weight were only marginally lower. Traditionally, one would expect higher feed intake and egg size for the brown strains.

Cage-free housing consists of a combination of slat floor and litter, with nest boxes and perches.  Each pen is 7.4 m2 and holds 60 hens in the adult phase (8.1 birds/m2).  Birds in this system were grown in the same pens used for the laying phase.

The range system, used for only three strains, consists of pens 3.7 m x 2.0 m holding 60 hens.  They have access to 334 m2 of grass pasture.  The pasture is divided in two and rotated every four weeks.

Not all strains were exposed to all of these environments. For example, only two brown-egg strains and one white-egg strain were tested on range.  All except two strains experienced the enrichable cages and the enriched colony system. This makes it hard to compare both the strains and the environmental systems, but we can draw a few conditional conclusions.

All birds were moulted during the test, which lasted until 623 days of age.

Comparing environmental systems
Ten white egg strains were exposed to both EC and ECS systems.  The most striking difference between these was with respect to laying house mortality. When hens were housed at 69 sq. in./hen,  the ECS system showed 23% laying house mortality compared with 16% for the hens in smaller cages, but the same space allowance.  While both values are extremely high for contemporary laying flocks, the larger colonies were clearly at a disadvantage.  Mortality for the same strains in conventional cages in a different building was 4.3%. Brown-egg strains compared in the same conditions showed overall lower mortality and no differences between ECS and EC. Among the white-egg strains, only Hy-Line W36 had relatively low mortality (6.0% and 7.4% in the EC and ECS systems respectively.)

Comparing the white egg strains in the ECS system at two different densities (447 cm2 versus 897 cm2) showed a definite benefit to the lower density.  Mortality was only 9.9% versus 23%. Brown egg strains also benefited from the more generous space allowance, although to a lesser extent: 7.1% mortality versus 10.9%.

While there were some strain differences in mortality within management systems, the general conclusion must be that large colonies and higher densities are associated with higher mortality.  This is not a new discovery but one that is not encouraging for those producers planning on meeting the demand for cage-free or even furnished cage management systems.

Feed intake and egg production were also affected by management system, as shown in Table 4. In general, birds in larger colonies tended to consume more feed. This may be because of perceived increased competition in the larger colonies.  Feed consumption was also higher in the cage-free and free range systems.  As to egg production data, there were no real trends and the figures for the brown strains kept at 447 cm2 do not appear to be consistent with the other data.

Because of the fact that not all strains were tested in all environments, it is not possible to make realistic comparisons between them. Presented in Table 5 are the highest ranked “Egg value minus feed cost” data for each of the environmental systems.

Most notable among these data are the low values for the free-range flocks.  These reflect relatively low egg production and high feed cost. As in conventional cages, the greater space allowance in the enriched cages resulted in higher values for egg income minus feed cost. Whether this would offset the higher cost associated with the extra space is doubtful.

All told, these data from the North Carolina Laying Test are of interest but this is limited by the very high mortality experienced in all but the conventional cage systems.  Causes of mortality are not reported.  As noted above, higher mortality is frequently associated with large colonies and with non-cage systems.  This runs counter to the popular belief among consumers that bird welfare is improved in such systems.  Until the systems can be improved, or consumers become more accepting of small colonies or conventional cages (unlikely in this writer’s opinion) industry will be faced with higher costs while producing eggs to meet the demand for cage-free eggs.

For those interested in the complete data from the test, they are available online at https://poultry.ces.ncsu.edu/layer-performance/ 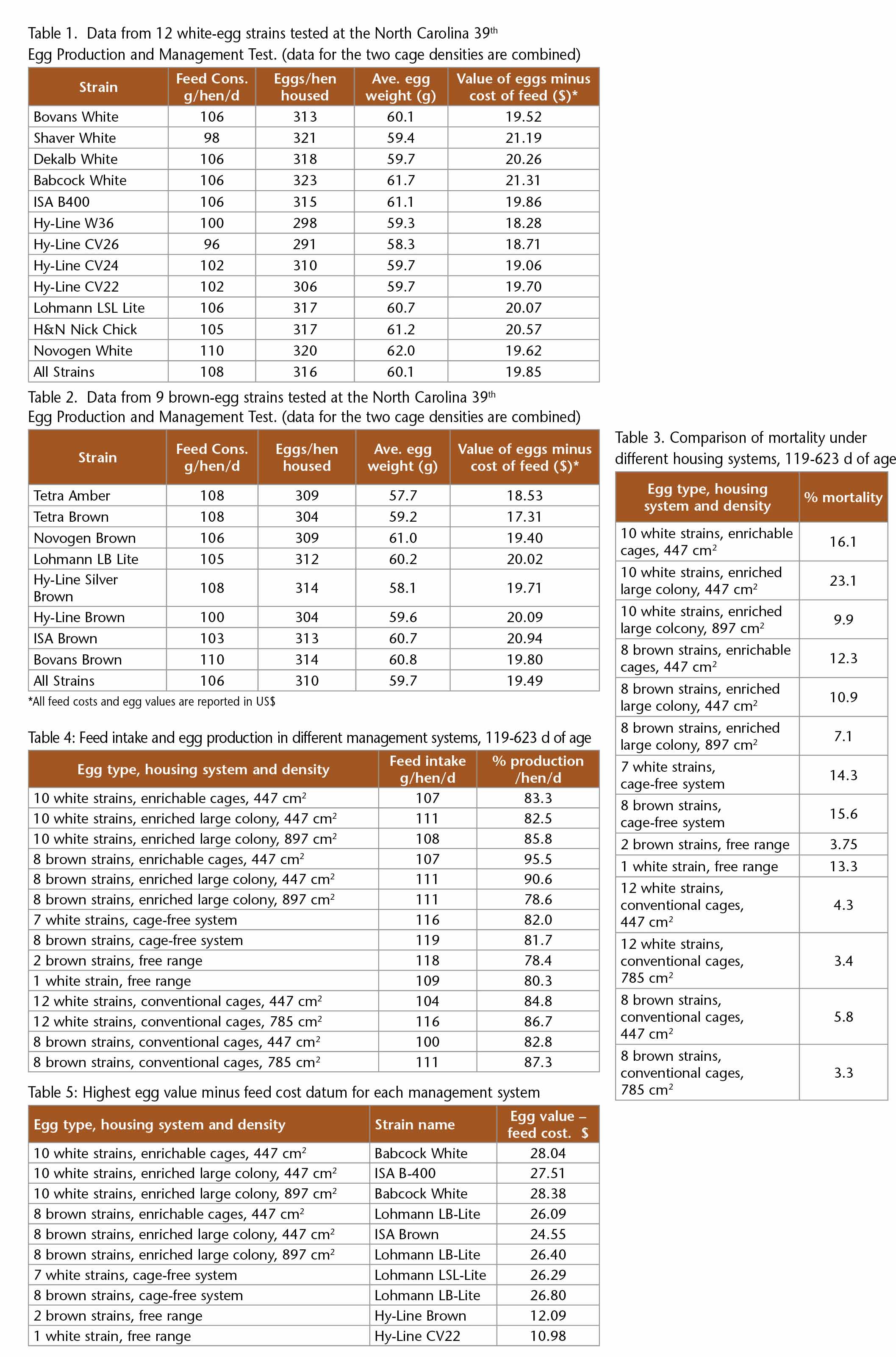