Experts share tips for protecting your farm from activist trespassers. 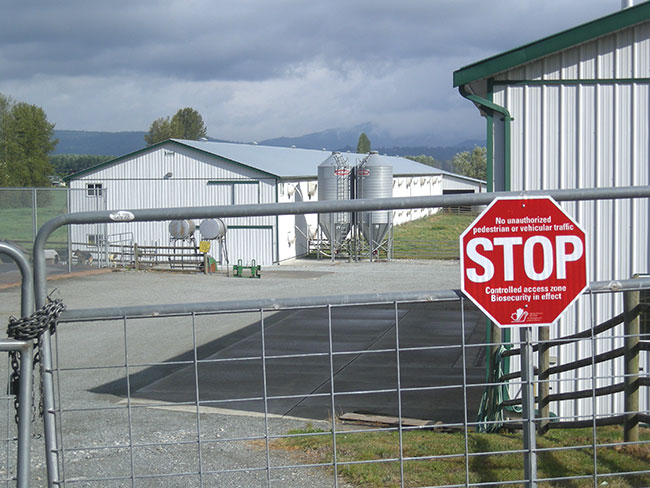 Make your barn look uninviting to activists scouting for places to target with things such as fencing and signage and keep your doors locked. Chicken Farmers of Canada PHOTOs

Ontario agricultural minister Ernie Hardeman knows how tough the farming business is. That’s why he was happy to propose legislation in early December that aims to alleviate growing farmer angst over farm invasions by animal welfare activists.

“There is an urgency to act,” Hardeman, a former feed mill owner and veteran Conservative MPP from rural Ontario, told Canadian Poultry just minutes after he tabled the Security from Trespass and Protecting Food Safety Act at Queen’s Park on December 2. “I’ve heard from farmers who no longer feel safe in their own homes.”

The proposed Ontario law includes fines of up to $25,000 for trespassing on farms and food processing facilities. It also contains measures to enhance public, animal and food safety.

It is similar to – but not as punitive as – Alberta’s Bill 27. Passed a week earlier, the new Albertan law brings a 100-fold increase in the maximum fine for trespassing to $200,000 for individuals and corporations, and possible jail time.

“People have the right to gather but they don’t have the right to do it on private property,” says the 72-year-old Hardeman, who also served as agriculture minister under former Ontario Premier Mike Harris. “They are putting people and animals at risk.”

Series of invasions
The stricter penalties are a legislative response to the spate of invasions of Canadian poultry and livestock operations that have made headlines in Canada over the past year.

The most recent incident occurred on Labour Day. That’s when several dozen animal rights activists from across Canada and as far away as New York City stormed a turkey barn near Fort MacLeod, Alta. In April, the same informally organized group occupied a hog barn in B.C. to protest the killing of animals for food.

The protesters claimed the 30,000 birds in the Hutterite-owned Alberta barn were being kept in inhumane conditions. Their five-hour siege ended peacefully thanks to the calming efforts of farm manager Mark Tschetter, who gave the protesters a tour of his facility.

“I’ve heard from farmers who no longer feel safe in their own homes.”

“We tried to deal with them in a nice manner because it was very agitating,” Tschetter told reporters that day. “To see people come off the highway into your farm – I mean, I won’t do it and I don’t expect other people to do it.”

The executive director of Alberta Turkey Producers applauded both the laying of charges against four of the protestors – albeit two months after the incident – and the advent of Bill 27. “We respect an individual’s right to make moral and dietary choices,” Cara Prout says. “But these individuals broke the law, disrupted a farm business and put biosecurity and animal health at risk in the name of their ideology.”

Preventitive measures
Beyond beefed-up trespassing laws, Bishop-Spencer says there are individual actions poultry producers can take to help prevent or deal with a militant action like a farm invasion.

They include enforcing a zero-tolerance policy towards animal abuse (an issue that has both fueled and directed protests at poultry operations), being more selective in the hiring process and keeping a close eye on traffic in and out of barns.

Bishop-Spencer also encourages farmers to actively communicate with both employees and the surrounding community, including emergency services and law enforcement. “Farmers are trusted members of their communities and are a safe source of food,” Bishop-Spencer says. “But they need to tell their story and explain and show to people just what it is they do.”

“Young people now live in the echo chamber of the Internet,” says Kurtis Andrews, an Ottawa lawyer who specializes in legal services for farmers and rural residents – though issues involving the activities of animal rights activists are now his main area of practice. “Some of them really buy into these causes. It’s like a religion and they believe their actions are justified even if they’re illegal.”

According to Andrews, the face and tactics of animal rights groups have changed in recent years. “It used to be multinational groups like Mercy for Animals or Last Chance for Animals running sophisticated undercover operations with members posing as farm employees to film images they could put on the Internet,” says Andrews, current vice-chair of Ontario’s Normal Farm Practices Protection Board.

“But now you’ve got groups like Meat the Victims and At War for Animals Niagara that operate on social media and organize vigils, disruptions and attacks on sales barns, abattoirs, transport trailers and farms.”

He says farm invasions are particularly dangerous because they put both people and animals at risk. “It can result in a serious escalation of conflict between property owners and trespassers,” says Andrews, who was raised on a family farm near Toronto that grew and sold vegetables and once had a petting zoo – an attraction he would today advise his parents not to have because it could attract unwanted attention from activists and others. 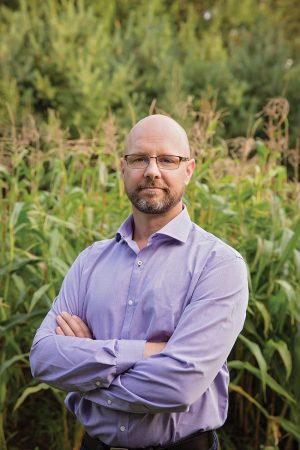 Kurtis Andrews is an Ottawa-based lawyer who spends most of his time on issues involving the activities of animal rights activists. Kurtis Andrews PHOTO

“And having activists from another part of the country or even another area of the world entering poultry and livestock barns creates a huge biosecurity risk. Food safety is one thing – but what about bird flu?”

Andrews adds that police and Crown prosecutors have been reluctant to arrest and prosecute activists. He hopes that attitude will change now that governments seem to be taking the issue more seriously.

“Modern steel barns are imposing structures, but not if doors or gates are left open and there is easy access to the site,” says Rovers, vice president of AFIMAC Canada, an international risk management and site security company. “You need to keep doors locked and have signage and fencing that make things secure – and that make them look secure to somebody driving around scouting for easy and inviting places to attack.”

Rovers also recommends farmers develop toolkits and train family and employees on what to do and how to act if and when a farm invasion occurs. “Farms are easily breeched and overrun and chaos quickly ensues,” says Rovers, who gave a presentation entitled “Are you a target for activists?” to a packed house at the Poultry Industry Services Workshop in Banff, Alta., in October.

“You need to have a contingency plan in place so that you and your employees know how to talk to protesters and how to contact and deal with police.”

Quick tips for protecting your farm from trespassers