How to handle welfare issues with the media and onlooker

Forum discusses challenges and how to handle welfare issues with the media and onlookers.  Traffic accidents are a daily occurrence on roadways worldwide – one
simply needs to watch the evening news to see the evidence. 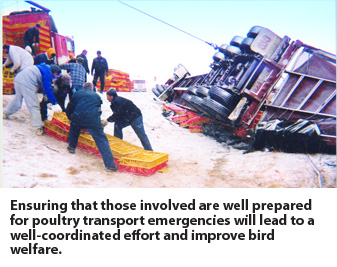 Traffic accidents are a daily occurrence on roadways worldwide – one simply needs to watch the evening news to see the evidence.  Although transport trucks are involved in less than three per cent of all accidents on the road, a proportion of these accidents involve trucks carrying livestock – including poultry.

Brian Herman, president of Brian’s Poultry Services Ltd., has certainly seen his fair share.  With a network of catching crews across the country, Herman is often one of the first to receive a call when an accident has occurred.  He estimates an average two poultry transport truck accidents per year in Ontario alone.

Although this may seem like a small number given the thousands of loads of birds transported each year in Canada, the fact that live animals are involved presents a unique emergency. Depending on the nature of the accident, some birds may be suffocating, severely injured, or dead.  Therefore the accident becomes an issue not only of human safety, but also of animal welfare – and possibly subject to government regulation.

A discussion forum was recently held in Guelph to identify current practices regarding poultry in transport and how to improve them – with particular attention being paid to poultry welfare.  Hosted by The Ontario Farm Animal Council (OFAC) and the Ontario Ministry of Agriculture, Food and Rural Affairs (OMAFRA), the forum drew over 60 participants representing producers, hatcheries, catching crews, transporters, processors and government. Discussion focused on determining which resources are needed to ensure poultry transport emergencies are dealt with in the best possible manner in the future – for both human safety and bird welfare.
Several factors were identified that could be addressed and improved upon.  The first was the fact that poultry accidents are occurring at the rate they are.  This is partly attributed to the fact that poultry trucks are extremely top-heavy when fully loaded.  The slightest shift in weight, even pulling over onto a graded shoulder, can cause a truck to tip over.  Therefore drivers must be extremely mindful of the potential instability of their rig, both while driving and while parked.

Compounding this problem is the fact that many farm driveways are not well designed for ease of turning.  “One thing that does upset us still is that it’s extremely common when you’re leaving farms to have the truck come driving out the laneway and have to jackknife in and out, do like a 32-point turn,” says Herman.  “You got a trailer that’s not extremely stable, and if the one side has to tip down into the ditch a little bit and then back up again to get out onto the road, you’re just looking for it to flop over.”  Improved driveway design, improved truck design and specialty driver training could all help to mitigate the problem in the first place.

When an accident does occur, the first on the scene are usually front-line responders such as the police, ambulance and fire service.  However these first responders often have little or no training on how to manage livestock emergencies.  This is one area where the Canadian Food Inspection Agency (CFIA) can lend a hand.

The CFIA runs a Livestock Emergency Transport Line that is open 24 hours, seven days a week.  The number has been distributed by OFAC to the Ontario Provincial Police on ticket-book sized cards and livestock transporters on clear window stickers so it is readily accessible. Similar efforts with the RCMP have been undertaken by Farm Animal Councils in western provinces.

Once the CFIA receives a call notifying them of an accident, they can direct some of the “next steps” that need to occur.

Jim Paterson, program specialist with the CFIA’s Animal Transport and Livestock Identification division provided an example.  “If this happened to be a Quebec carrier, rather than call all the way down there, there is a network set up here in Ontario that we can put them in touch with.”  Paterson adds, “We have a number of federal establishments, we also know of the provincial establishments that slaughter poultry.  We can perhaps assist in seeing that they do get in with a priority to be slaughtered.”

The CFIA will also ensure that government regulations are adhered to – the Health of Animals Regulations Part XII prohibits the transportation of animals unfit to travel.  Paterson stresses that it is not the intent of the CFIA to examine every bird, which is time consuming and could compromise the welfare of all the birds, especially in the case of extreme weather.

“Our intent is to examine the crates that have been severely damaged and to make sure that the birds that did survive the impact are suitable to be transported to a (designated slaughter facility),” says Paterson. “We have to stay within our guidelines that an animal has to be fit to be transported, otherwise you do the humane thing and you euthanize on site.  But we’re usually not talking great numbers.”

The reason we’re not talking great numbers is due to a positive design element of the trucks – they have a superstructure that tends to hold the load in.  “Typically,” says Herman, “they’re lying on their side in real good condition.  The problem is they’re smothering.”  This is because the chickens are now piled on top on one another within the crate.  For this reason, the catching crew needs to get the crates off the truck and righted on the side of the road as quickly as possible.

This can prove a logistical nightmare, since each crate is upwards of fifty pounds, and often needs to be carried out of a ditch or up an embankment, sometimes in bad weather.  Since this is extremely hard work, it is important to keep the morale of the catching crew high.  “Buy them some coffee, buy them some donuts, show them that you care about them,” says Herman, “and do not be stingy with the money.”

Finally, if a poultry truck is involved in an accident in a highly visible area such as a 400-series highway, an impediment to a speedy cleanup can be the onlookers and those trying to help.  Let the police take the lead in directing people away, and ensure them that there are trained experts on the scene.  One suggestion that arose at the discussion forum was the use of a tarp that could be set up to keep the accident, or at least an area for inspection and triage of potentially injured birds, from public view.  This idea needs to be further developed to make it possible in a variety of situations.

The media may also show up. Crystal Mackay, executive director of OFAC, presented some tips on dealing with the media.  She said that human safety should come first, bird welfare second, and communications last.  The media is looking for a good story or juicy quote, so it advisable to have one person designated to handle all media inquiries.  If the scene is too busy, refer them to OFAC (or your provincial animal council) or someone off site, or offer to follow up with them after the cleanup.  OFAC also offers training programs and resources to help.  Ensuring that those involved are well prepared for future poultry transport emergencies will lead to a well-coordinated effort, and in turn, improved bird welfare. For more information and resources on this topic, please visit www.ofac.org or www.livestockwelfare.com.