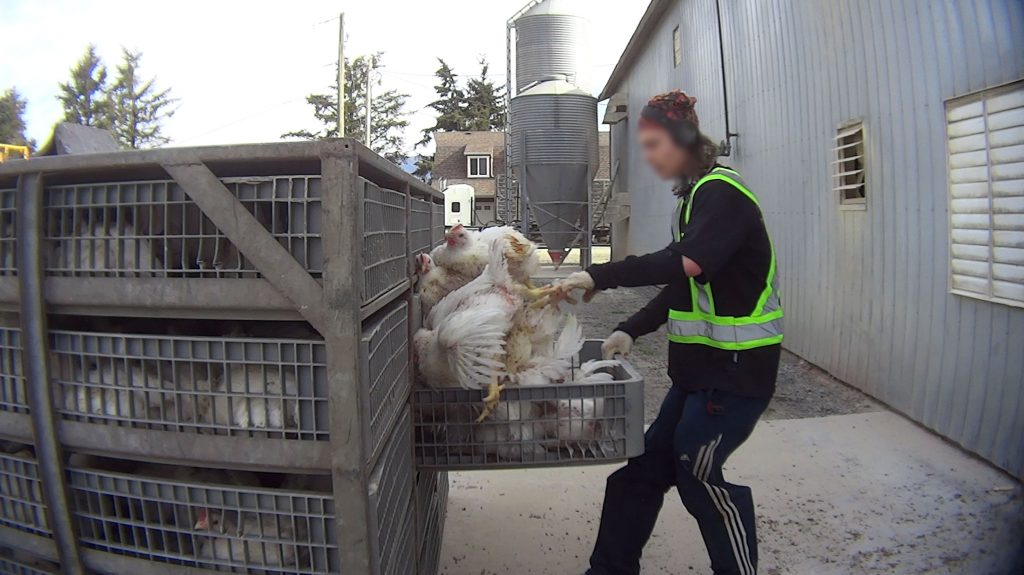 A catcher was captured on hidden camera roughly handling chickens.

The Canadian Food Inspection Agency has laid 38 charges against a man from Chilliwack, B.C., and two companies over allegations of undue suffering to chickens.

The charges were laid under the Health of Animals Regulations, which say no person shall beat an animal being loaded or unloaded in a way likely to cause injury or undue suffering.

Marcie Moriarty of the British Columbia SPCA said in June that its investigators were examining claims of animal cruelty involving Elite Services following the release of video footage allegedly showing hens stuck in mounds of feces and packed into wire cages with dead birds.

Dueck, who is president of Elite Farm Services, which loads birds into crates for processing, wasn’t immediately available for comment, but in June he said the company follows all animal welfare guidelines according to industry standards.

Sofina Foods could not immediately be reached for comment on Thursday.

Dueck and representatives for the companies are expected to appear in a Chilliwack court Dec. 18.

Peter Fricker of the Vancouver Humane Society said in an interview he believes the charges are significant because the allegations have been made against companies that are responsible for the treatment of animals in their care.

”It may be a wake-up call to the animal agriculture industry in B.C. and perhaps across Canada,” he said.