Lockwood Farms turns to insects in search of a sustainable protein source for its flock. 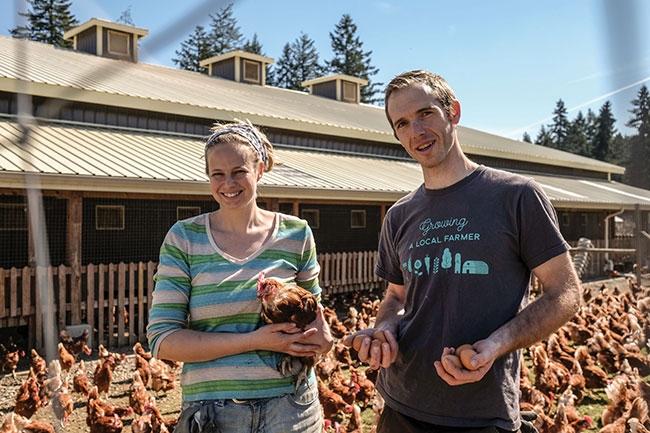 In search of an environmentally-friendly feed source, James and Cammy Lockwood added black solder fly larvae to their poultry diet.

James and Cammy Lockwood of Lockwood Farms on Vancouver Island share a deep concern about the future of the planet. This inspired the couple to become the first commercial layer farm in Canada to include black soldier fly (BSF) larvae in their poultry diet. That innovation has led to the millennials being named B.C.’s Outstanding Young Farmers in March.

James grew up on a wholesale nursery but didn’t see that in his future. He was on his way to a career with the RCMP when he and his wife, Cammy, decided to grow a few vegetables and raise a few chickens to feed their soon-to-be family. They were instantly hooked on farming.

In 2011, James convinced his father, Barry, to let him grow a few rows of vegetables on a rundown property the family had acquired, which he and Cammy then sold at a local farmers market. Thus, Lockwood Farms was born.

At the same time, they converted an old shed into a home for 16 laying hens. That flock soon grew to 399 hens and a larger barn. Vegetable production also expanded and the Lockwoods now grow over two acres of vegetables, salad mixes, tomatoes and peppers in both poly greenhouses and open fields.

Their foray into egg production got a huge boost in 2015 when they received a 3,000-bird quota in the B.C. Egg Marketing Board new entrant lottery. They have since acquired additional quota and now have 4,700 layers.

To accommodate the larger flock, they built a new barn with mirror image sides. Each side has a scratch floor and access to an outdoor range. Doors are manually operated so the Lockwoods can maintain an accurate record of outdoor access.

Feed, water, nest boxes and roosting areas are located on a slatted floor almost four feet higher than the scratch floor. Perch rails spaced 18 inches apart help the birds move up and down.

Environmental benefits
The big question was what to feed them. “I was trying to think more sustainably,” Cammy says. “I had read that soybean production was destroying the Amazon rainforest and didn’t want to contribute to that. ‘What are you doing [to help the environment]?’ is a question we’re often asked and I wanted to have an answer.”

The Lockwoods decided to feed their flock a GMO and soy-free diet but finding a protein source was difficult. A Google search led them to Enterra, a small feed company in Langley, B.C., that was starting to rear BSF larvae as a feed for poultry, fish and pets. “We had to wait for them to get (Canadian Food Inspection Agency) approval before we could start using it in our feed,” Cammy says.

Enterra’s vice-president of operations, Victoria Leung, notes an adult BSF has no mouth to eat with. That means the larvae must store enough protein and fat to sustain the flies during their five to seven-day adult lifespan. As a result, mature BSF larvae are “40 per cent protein, 40 per cent fat, a natural source of methionine and super high in calcium and loric acid,” Leung says.

Cammy notes feeding insects to poultry is perfectly natural since that is what free-range chickens dig for when they forage. She has become an evangelist for insect protein, stating “an acre of soy will only produce about 350 pounds of edible protein but an acre of insects have the potential to produce 100,000 pounds of usable protein.”

The cost factor
Nutritionist Everett Dixon of Top Shelf Feeds says the Lockwoods’ insistence on a GMO, corn and soy-free ration presented some significant constraints that BSF helps to meet. “BSF brings energy and protein to the ration,” he says, explaining the ration is wheat-based supplemented with peas, extruded flax, calcium, phosphorus, minerals and vitamins.

“It’s a tight ration and there are some compromises with it,” Dixon adds, admitting that, “because of the ingredients and constraints it’s more expensive.” He did not say how much more expensive but Elijah Kiarie, the McIntosh Family professor in poultry nutrition at the University of Guelph, reports he paid $8/kg for BSF he purchased for a research project.

He says that, “to use insect meal in a feed formulation based on cost, [it] needs to be below $1/kg.”

Both Enterra and the Lockwoods readily admit the cost is much higher than a conventional layer ration. Leung notes BSF is “still a premium ingredient. Today, it’s not really a commodity product but over the long run we will see the price come down.”

“We’re Enterra’s only commercial layer account,” James explains. “We are the guinea pigs and it does cost us.”

The Lockwoods recover those costs by self-marketing to restauranteurs who share their philosophy. “We set our prices based on the cost of producing the eggs, grading, packaging and labour. We aim to get similar returns as other egg farmers.”

Impact on performance
The price may be a major stumbling block for most commercial producers, but egg production should not be. The Lockwoods believe they are getting similar production to other free-range flocks. That said, they note they are just completing their first full flock on the BSF diet. As a result, they don’t yet have the data to back up their assumptions.

However, Kiarie’s research indicates BSF could replace soybean meal in egg layer diets without too many adverse impacts. He and a research student recently completed a study to evaluate egg production, select internal egg quality and feed conversion in birds fed BSF larvae.

Forty-one per cent of soybean meal was replaced by BSF during weeks 19 to 27, while BSF larvae replaced all the soybean meal in weeks 28 to 43. During the first phase, the BSF larvae improved yolk colour, shell breaking strength and shell thickness. Hen-day egg production and egg mass were comparable to soybean meal-fed birds. However, the BSF increased feed intake, leading to a poorer feed conversion ratio.

There was also no impact on hen-day egg production during the second phase. The full BSF diet did reduce egg mass but increased yolk colour, shell strength and thickness. Kiairie says further research on nutrient digestibility is needed to improve the feed conversion ratio.

“Based on our research, [BSF] can be a good protein feed for laying hens,” Klairie states, adding, “we need to understand why we see a reduction on egg weight and an increase in feed intake. These two parameters will negatively affect feed conversion.”

The way forward
Klairie says future poultry nutrition research needs to focus on improving the digestibility of feed ingredients. “Any nutrient poultry is not able to digest ultimately affects chicken house environment and nutrient leaching. Currently, chickens excrete about 15 to 20 per cent of the nutrients we feed them.”

He thinks the answer lies in fortifying poultry feed with amino acids. “It is possible to reduce inclusion of feed proteins such as insect protein [or] soybean meal [with use of] pure amino acids.”

Meanwhile, the Lockwoods are looking at other innovations to enhance their poultry production. As an example, they are considering planting kiwi in their range. The kiwi would not only provide additional revenue but, more importantly for the birds, provide summer shade as well as protection from predators.

Black soldier fly larvae by the numbers
Lockwood Farms is the first commercial layer barn to add Enterra’s black soilder fly larvae product, called EnterraGrubs, to its feed. Here are some key figures about the product.