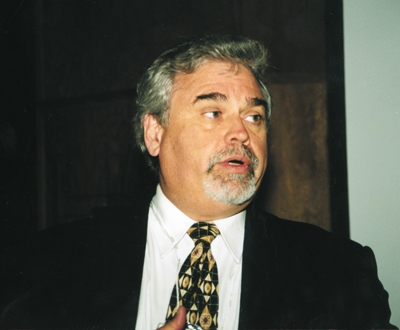 Dr. Larry Martin, CEO of the George Morris Centre in Guelph, Ont. described the benefits and risks of globilization for Canada’s poultry industry.

The closing speaker at the Poultry Service Industry Workshop was Dr. Larry Martin, CEO of the George Morris Centre in Guelph, Ontario and an Agricultural Economist who has done extensive research on international trade policy. He is pro-globalization and provided information on its potential implications for Canada’s poultry industry.

First of all, Martin described globalization as the internationalization of information, markets, products, and commodity prices. Access to information about market requirements in other countries will allow Canadian busi-nesses to adapt accordingly. He emphasized that success in international marketing requires responding to customer needs, not dumping surplus product.

Martin described several factors, which have influenced the trend to globalization.

One consequence of globalization is that animal products will be produced where there is enough land base to absorb the nutrients.

No discussion of globalization would be complete without understanding the World Trade Organization (WTO). Martin described the WTO as a multilateral treaty that addresses and makes rules for:

Canadians should care about the WTO because it provides market access. This means production will occur here if we have a competitive cost advantage. It will harmonize and prevent non-scientific areas from being used as non-tariff barriers to trade. International rules will eventually mean no country can manipulate the international treaty intent under their own biased laws and will give everyone some equity in dealing with these matters.

Martin described some of the key points of the last round of negotiations:

There are several myths surrounding globalization, which Martin was eager to refute.

Fact – If poor farmers in the developing world are allowed to produce for the export market they will receive more money for their products and improve their standard of living. Food aid is equivalent to dumping and drives down prices for producers in developing countries.

Myth – WTO is anti democratic and gives up sovereignty

Fact – This is a favourite statement by non-governmental organizations that are unelected and unrepresentative. It is made about a process that is voluntarily entered into by people appointed by elected governments.

Fact – We have the largest arable land base and the fewest people of any country in the world. An increase in export of value-added products would benefit Canadian producers.

To be successful in responding to globalization, Martin believes Canadian agriculture must:

Globalization will provide huge new opportunities because the world will be the market place instead of just the population of the local town, province or country. Removal of trade barriers will eliminate distortions caused by inefficient competitors.

The movement towards globalization is not without risks to Canadian agriculture. First of all, according to Martin, there is direct exposure to economic downturns in other countries. Without real free trade there is also exposure to protectionism and unfair trade practices of other countries. Canada will have to compete with strong and recognizable U.S. brand names. This will be a major disadvantage if we don’t also use branding for our products.

Martin predicts there will not be significant changes for 5 to 10 years but eventually quota will have no value. The slower we are to make structural change the more difficult it will be to adjust. Finally, Martin believes the future success of the Canadian poultry industry in a globalized world will depend on whether major changes are made to Canadian tariffs, how fast they decline when they fall and whether the industry has a competitive advantage after the adjustment.