To a hen, not all light is created equal 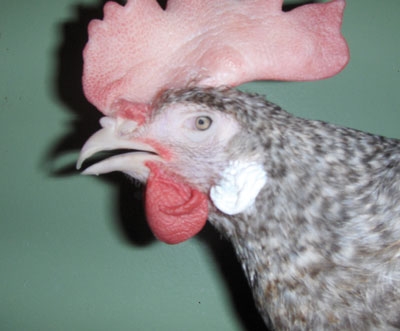 Smoky Joe hens, which are naturally blind, were used in this study to further determine if the retina is involved in mediating the effect of light wavelengths.

As energy costs continue to rise and the ban on the sale of incandescent light bulbs looms (occurring in 2012), alternative light sources are quickly being adopted by the poultry industry. However, chickens see light differently than we do. Thus the spectrum of light emitted from these new sources must be considered, as it can have an impact the reproductive efficiency and behaviour of chickens.

A lighting option that is quickly gaining popularity is the light emitting diode (LED). Dr. Gregoy Bedecarrats, a professor with the department of animal and poultry science at the University of Guelph, has done some initial studies on LED lighting in laying hens, and found that the spectrum of light emitted may slow or delay the reproductive efficiency of layers. He presented his results at the Poultry Industry Council’s Research Day this past spring.

Chickens and light
Chickens don’t just “see” light. They can absorb light through the retinas in their eyes in ways that humans do not, and they can also sense light through their pineal gland and hypothalamus, which are located on top of and within the brain, respectively.  Consequently, chickens can “see”  a greater range of light wavelengths than we can.

The pineal gland works like a clock to “set” the rhythms between light and dark. For example, if the light-dark cycle is constant, a rooster will crow at the same time every day. But if the light cycle is changed, the rooster will adapt and change the time it crows.

This is important to the poultry farmer because the type of lights may affect the wavelengths emitted and stimulate different areas of the chicken.

For example, green light slows the birds’ maturation and, while red light has been shown to be needed for sexual maturity, it also may be tied to hyperactivity and aggressive behaviour.

The Study
In the study, an RGB (red, green, blue) LED system was installed for layer cages, and the effect of wavelength on growth and sexual maturation in blind and sighted Smoky Joe pullets was tested and measured. Smoky Joe hens are a strain of White Leghorn harbouring a recessive mutation causing retinal degeneration. By eight weeks of age, all affected animals are blind. Smoky Joe hens were used to further determine whether or not the retina is involved in mediating the effect of light wavelengths.

The experimental room was partitioned into three independent sections, each equipped with LED lights providing either pure green (G), red (R) or white (W) light. For all groups, intensity was adjusted to 10 lux at hens’ level. At 14 weeks of age, 20 pullets were randomly allocated to each section (G: 11 blind, nine sighted; R: 11 blind, nine sighted; W: 12 blind, eight sighted). During the first week, incandescent lighting was provided (10 lux, eight hours photoperiod) for pullets to adapt to their new environment. At 15 weeks of age, LED lights (G, R and W) were turned on for eight hours and at 20 weeks, pullets were photostimulated by an abrupt change to a 14-hour photoperiod. Feed and water were freely provided throughout the study.

During the study, body weight progressively increased with no difference observed between light treatments or between blind and sighted birds. Similarly, no difference in tibia length was observed, suggesting that, in cages, light wavelength did not impact feeding and body growth.

Age at first egg was significantly advanced for pullets from the red light (165.9±1.3 d) and white light (166.8±1.7 d) groups compared to birds under green light (188.4±2.2 d). However, although no difference in age at first egg was observed between R and W hens, levels of estradiol after photostimulation were the highest for the R birds, suggesting that activation of the ovary and recruitment of follicles was the strongest. Combs from R and W birds were significantly taller than for G birds, again showing advanced sexual maturation.

Overall egg production peaked first for the R group (25 weeks), followed by the W group (26 weeks), while it was not yet reached for the G group at 29 weeks. At 27 weeks of age, total egg production was greatest for the R group (662 eggs; 33.1±1.5 eggs/hen) followed by W group (586 eggs; 30.8±1.2 eggs/hen) and significantly lower for G group (242; 12.7±1.8 eggs/hen). No difference in corticosterone levels was observed between groups before and one week after lights were turned on. However, levels did slightly increase in the R birds after 44 days of exposure, suggesting that longtime exposure to pure red light may be stressful.

“The key message here is that the green really has an impact on reproduction,” says Bedecarrats. Red is required for sexual maturation.
If you have white light that has red within the spectrum, you’re fine. But if you’re lacking the red you’re going to have problems, he says.

In conclusion, although light wavelength did not influence growth of pullets in cages, red light is required for advancing sexual maturation and this effect does not require a functional retina. Using LED lights, the spectrum could be precisely adapted to promote faster sexual maturation and sustained egg production.

Lights are not created equal
Incandescent lights are inexpensive to buy but come with a short life span and because more than 90 per cent of the energy is used to heat a metal filament they use a lot of energy for the light they emit. They are, however, dimmable and instant on, and their spectral peak is in the red at 630 to 780 nanometres.

Fluorescent and compact fluorescent cost more to purchase, but are more energy efficient. The spectrum varies from green to orange, depending upon the fixture.

There are also growing concerns about disposal of fluorescent lights because they contain mercury. “The benefits of energy efficiency might be outpaced by the problem of disposal,” he says.

High-pressure sodium lights are also an option. They are in the yellow to orange spectrum – closer to red – but take longer to warm up and may not be dimmable.

LED lights are still expensive but can create the light spectrum needed with no heat generation. They are instant on and dimmable. They also have great energy efficiency and a long life span.

What next?
The next step is to look at what happens on the floor, especially with broiler breeders, for example, with regard to hyperactivity. Something that might be really good in cages might not be good on the floor because of behavioural issues, he says.

What’s needed is to: