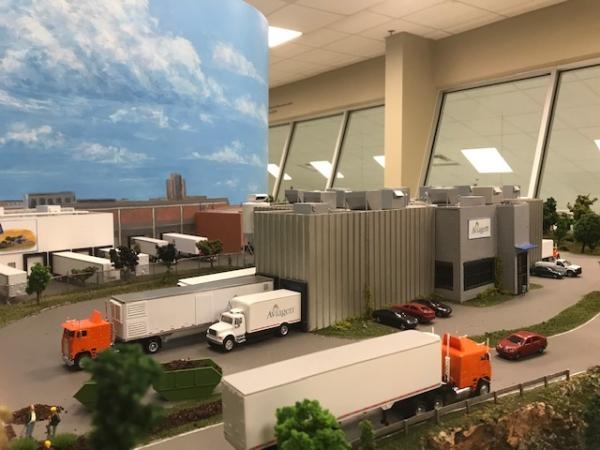 The 9-by-36-foot diorama is a replica of an Aviagen hatchery and delivery truck. Aviagen

A replica of an Aviagen hatchery and delivery truck are currently on display in a 9-by-36-foot poultry industry diorama – a miniature model exhibited at the Georgia Poultry Lab in Gainesville since 2017. Aviagen is a sponsor of the diorama, and the hatchery shown is based on the company’s Sallisaw, Okla., facility.

With an HO-scale electric train running through its landscape, the diorama depicts the entire poultry value chain – from a pullet farm, breeder farm, hatchery and broiler farm, to a processing plant, feed mill and commercial egg farm. The scene closes at the Port of Savannah, through which poultry is exported to other countries. A video walk-through of the entire diorama is available at www.gapoultrylab.org/poultry-diorama/.

Promoting public awareness of poultry health and welfare
The diorama helps the lab fulfil its goal of educating the public on an industry that represents a major part of the economy in Georgia, which is the top producer of poultry and broilers in the U.S. Aviagen currently has one hatchery in Blairsville, Ga., and a new hatchery now under construction in Quitman, Ga., is slated to open in the spring of 2019.

The Georgia Poultry Lab hosts regular public tours led by poultry health experts, who educate the public on the great care that is taken to keep the industry healthy. The diorama is located in the lab’s mezzanine, where groups can biosecurely view the lab activities below through large windows.

“Aviagen is committed to the health, welfare and biosecurity of our poultry throughout the value chain, and this is a commitment we share with the Georgia Poultry Lab. We’re proud to sponsor the diorama exhibit, as it is part of the lab’s efforts to build public confidence in our industry,” explained Aviagen Vice President of Veterinary Services Dr. Eric Jensen.

“The diorama gives us an opportunity to explain all aspects of the industry, from live production to exports, to groups that range from middle school kids to international delegations, without going to farms or plants,” added Dr. Louise Dufour-Zavala, executive director of the Georgia Poultry Lab. “It also helps children understand where their food is coming from!”