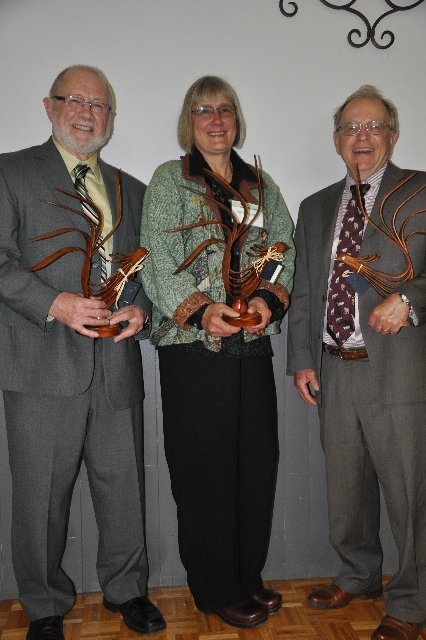 May 11, 2012 – The Poultry Industry Council (PIC) recently honoured three researchers from the University of Guelph with it’s 2012 Poultry Worker of the Year Award.

Dr. Steve Leeson, Dr. Ian Duncan and the late Dr. Bruce Hunter were presented with the award May 8 during a ceremony at the Poultry Industry Council’s Spring Symposium (formerly known as Research Day). The annual Poultry Worker of the Year award recognizes those who have made a significant contribution to the poultry industry.

Duncan began his research career studying how important a nest is to a hen, and his groundbreaking work is regarded as the foundation for much of the animal welfare research with laying hens performed around the world.

Dr. Leeson, regarded as the “god of poultry nutrition” focused on feeding both birds and people.  Well respected by industry for his understanding of the importance of research in the real world, he is credited with providing new marketing opportunities for designer egg products, such as the Omega-3 egg.  During his career, he averaged one publication per month, which includes authoring books, articles for refereed journals, and trade journals.

Dr. Bruce Hunter’s award was accepted by his widow Daina Hunter.  Dr. Hunter, who passed away suddenly in October 2011, was acknowledged for his 33 years of teaching and research at the Ontario Veterinary College (OVC).   He ran the OVC’s wild bird clinic for 15 years, and was a co-leader of a Veterinarians Without Borders poultry project in Ghana.  He was also a highly-regarded expert on mink farming, and played a key role in the development of a Canadian Community of Practice in EcoHealth (CoPEH) and a graduate-level course in ecosystem approaches to health that involves the University of Guelph, the University of British Columbia and the Université du Québec à Montréal.