Some producers are adding enrichments to enable more natural behaviour. Do they enhance animal welfare 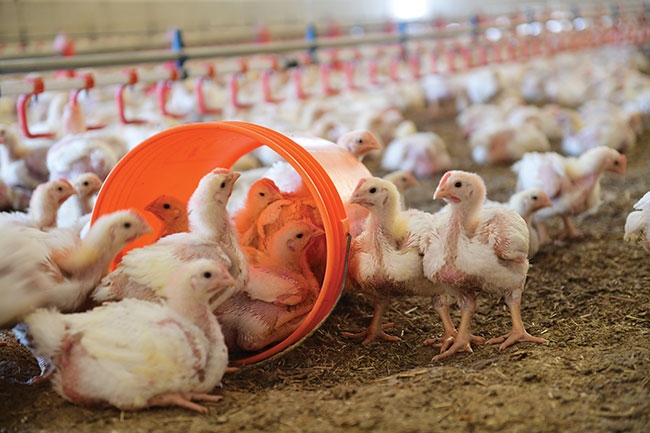 That’s the guiding principle the Schroeders family use when thinking of ways to improve the decidedly short lives of chickens in the broiler barns they operate at five locations in Ontario’s Huron County region.

In addition to increased natural lighting, improved air quality and drier bedding through the use of ventilation methods and technology used in Europe and the swine industry, the Schroeders have introduced several simple, homespun innovations they believe make their birds happier.

The most popular are step stools that birds can perch on or hide under, and pails with holes in the bottoms that are laid on their sides on barn floors.

“Chickens just love to sit inside them to hide and feel protected,” says Schroeders, whose family got into the organic broiler business in 2011 as a way to diversify their hog farming and commercial grain growing operations. “We have dozens of pails and they’re always in use.”

Some enrichment duds include small balls with bells that are popular with dogs and cats.

“Chickens are very picky about their toys,” Schroeders quips. “You can’t teach them to play fetch. But there are things they like to do. You have to experiment to find them – it’s really trial and error.”

Making chickens’ lives better, he adds, is both good animal husbandry and a smart approach to business.

“We take pride in producing poultry as a food source in the most sustainable and humane way possible,” Schroeders says. “Our birds are more active now, there’s more background noise and combs are brighter on older ones. That’s only anecdotal evidence though – something a farmer knows. More research would be required to find metrics you could measure it by.”

Growing research base
Such scientific validation is now slowly emerging. In recent years, a growing number of animal researchers and poultry companies in North America and Europe have been studying ways to improve animal welfare by finding alternatives to conventional production methods in which chickens are raised on the floors of solid-walled barns with artificial light cycles that only allow a few hours of darkness daily.

The central premise is that enrichments allow chickens and turkeys to better express natural behaviours that enable them to lead happier, more meaningful lives.

Until recently, much of that animal welfare research had been focused on longer-living laying hens. But experts have now turned their attention to issues involving the production of both conventional and organic broiler chickens.

This fall, for example, animal research scientist Stephanie Torrey is conducting a study at the University of Guelph to determine if and to what extent broiler chickens even care about barn enrichments. “We just don’t know how much these things matter to them,” Torrey says.

To find out, the researcher is running a preference and motivation study using a small number of broilers in a barn on the Ontario university campus. The study involves a weighted door that the birds must push through in order to access things they enjoy, like dust baths.

Torrey has conducted similar tests using food and fake worms to test and determine everything from physical fitness to the behaviour of several chicken breeds.

She said trying to gauge a chicken’s level of contentment is far from an exact science. “We have to infer that an animal is happy or content or experiencing pleasure based on their behaviour,” Torrey says.

The results of a 2018 study by animal scientists at Wageningen University and Research in the Netherlands suggests that enhanced natural living conditions in broiler houses do have beneficial physical and mental effects on birds.

The study compared the effects of natural light versus artificial light on indoor-housed commercial broilers in three identical houses on a single farm. Other enrichment materials the researchers added to the houses included wood shavings bales, round metal perches and metal chains as pecking objects.

Carried out over five consecutive production cycles, the study compared the animals’ behaviour at 25 and 39 days of age and issues like lameness, footpad dermatitis, hock burn, cleanliness and injuries.

The findings suggested that the birds exposed to natural lighting and enriched environments walked, explored and foraged more than those without. “We concluded that providing environmental enrichment and natural light stimulated activity and natural behaviours in broiler chickens,” reads the study.

For its part, a recent scientific literature review on the use of various types of environmental enrichments found that elevated resting-places, panels, barriers, bales of straw, covered verandas and outdoor ranges “could” offer benefits in regards to broiler behaviour and overall animal health.

The review suggested that ideas for the practical application of broiler house enhancements – together with considerations of genotype, production system, stocking density, light, and flock size – “need to be further developed and studied, preferably in commercial trials.”

A corporate leader
At least one big American poultry producer – Perdue Farms – has made a major commitment to finding ways to raise broiler birds more naturally.

Part of a sweeping care plan that Perdue launched in 2016, the plan revolves around the Five Freedoms for Animal Welfare – a set of ‘rules’ that were developed in Europe in the 1960s. As a refresher, they include freedom from hunger and thirst, discomfort, pain and injury, fear and distress and freedom to express natural behavior.

“It’s all based on the understanding that animals deserve an environment that provides them with the things they want and meets their basic needs,” says Bruce Stewart-Brown, a veterinarian and senior vice president of food safety, quality and live operations for Perdue.

The company harvests roughly 14 million broilers every week from approximately 2,000 privately owned farms across the U.S., making it the country’s fourth largest chicken producer and the number one brand of fresh chicken.

According to Stewart-Brown, Perdue continues to do research and testing to determine which enrichments most improve the lives of broilers over conventional production methods.

Earlier this year it also held its first Chicken Welfare Enrichment Design Contest, which invited Perdue family farmers to invent and successfully test devices that allowed chickens to roost, perch, play and exercise using. Inventions had to be easy to build, store and integrate into chicken houses.

The winning entry – a design dubbed The Carpenter Bench that consisted of a foot-wide, six-foot-long shelf with a cleated ramp access and hinges for folding for catching and cleanouts – earned a North Carolina farming family $5,000.

“It’s clear that it’s good for chickens to get off the litter and have places to roost or hide,” Stewart-Brown says. “Doing things that enable them to do that seems more respectful to the animal. We’re very proud of the work we’re doing and to see our efforts to improve animal welfare evolve in this way.”