Experienced broiler and turkey producers share their keys to success in growing birds without antibiotics. 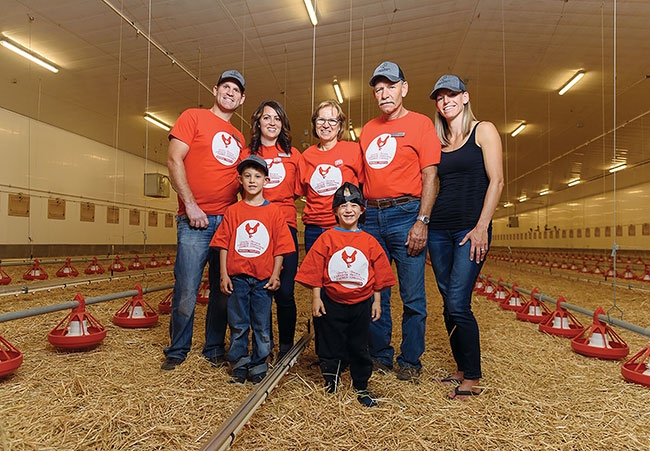 Adrian Tobler (first on the left) switched his entire operation to raised without antibiotics in late 2017 and hasn’t looked back. PHOTO CREDIT: East Central Alberta Review

When it came to the use of antibiotics as a way to prevent rather to treat illness among his birds, Alberta poultry producer Adrian Tobler used to see the issue as a causality dilemma like the chicken-and-egg metaphor.

“It wasn’t clear to me whether antibiotics were more valuable as a way to keep my birds from getting sick or helping them when they got sick,” says Tobler, who raises 60,000 broilers a year for Maple Leaf on his family’s farm in Rosalind, Alta, a picturesque prairies village an hour’s drive southeast of Edmonton.

But that all changed in the spring of 2015 – the same time that the Chicken Farmers of Canada announced that it was eliminating the preventative use of category II antibiotics in the sector by the end of 2018 as the second step in its ongoing antimicrobial use (AMU) reduction strategy. That’s when Tobler and a few fellow producers met with a Maple Leaf marketing team from Ontario to hear about the benefits of raising birds without the use of antibiotics – or RWA.

“They said the market wanted it,” Tobler recalls. “I figured that if the market wants it and Maple Leaf wants it, it was the perfect time for me to do it.”

After running two transition flocks through his two adjoining barns, which are connected by a common feeding system, Tobler switched his entire operation to RWA in late 2017.

In the two years since then, he has successfully shipped a dozen consecutive RWA flocks to Maple Leaf. Notably, most of those shipments – including all seven in 2018 – have had more weight and less mortality than conventional flocks.

“We haven’t done that every time, but many of them are the best we’ve ever had,” Tobler says, noting that the average bird in flocks two through eight in 2018 weighed 2.31 kilograms when they shipped out at 38 days.

On top of that production success, Tobler gets timely technical support from Maple Leaf and financial incentives that include an eight-cent-per-kilo premium and two- to four-cent feed differential for RWA birds. These factors together have inspired confidence in both his farm management practices and the chicken industry’s efforts as a whole to eliminate antibiotics as a supplement in the feed of modern livestock.

“You really need to relearn how to raise chickens,” he says. “The principles of what they need and what to look for are the same. What’s different is that you need be proactive, not reactive. You’ve got to be on your toes and spend more hours in the barn to get to know what to look for.”

Tobler points to one technique he now uses to avoid outbreaks of painful and ultimately deadly necrotic enteritis, which is caused by undigested protein in the gut.

“You need to slow the birds down after the seven-day weight by lowering the lighting intensity to govern feed intake,” he says. “I was taught to grow kilos, so that’s been the hardest thing to get my head around. The trick is to hold them back and find out how far you can push them without becoming necrotic. You have to patient and watch for the signs.”

Another tip Tobler has for chicken farmers in regards to RWA is to keep an open mind. “Listen to everybody and don’t think you know what’s best or you’ll repeat other people’s failures,” he says. “And don’t get greedy during the grow. Wait until day 28 when the risk of disease has passed and you can add a little more light.”

1. Source clean ingredients, test regularly
“Sourcing clean feed is one of the keys,” says Christian Geunter, who runs 100,000 birds in three barns and a diversified operation that includes other livestock and grain farming on his family’s farm near Sylvan Lake, Alta.

“I have not had any problems when using my own feed ingredients or sourcing from a quality supplier that does the appropriate handling and testing,” he continues. “Whoever you deal with, make sure it’s an audited antibiotic-free facility.”

2. Ensure cleanliness, water quality
Selected by Sofina to supply its RWA poultry program, Geunter also puts a premium on keeping his operation as clean as possible. “Cleanliness is paramount,” he says. “You need to maintain a pristine environment. It takes more work but it’s critical. You can’t afford to allow any area to become a potential reservoir for bacteria. Among a number of regular protocols, we thoroughly wash our barns from top to bottom with cleaner and hot water every cycle.

“Water quality is also a huge factor in the success of a reduced antimicrobials system. You can’t take it for granted.”

3. Optimize nutrition strategies
When poultry production shifts away from the use of antimicrobials, Geunter says gut health becomes the main focus. “You need to have a plan to support it,” he says.

“For me, it’s all about optimizing the diet to include and use the right ingredients and feed additives. Enzymes are important to help the birds with otherwise hard-to-digest feed components. New options such as medium chain fatty acids are coming along that show potential to support health and productivity.”

4. Prioritize management
An example of the level of detail that Geunter applies to his RWA operation is to use personal and computer-based monitoring throughout the day to ensure that temperature, ventilation and humidity in barns remain optimal.

“You have to make sure that every little point is taken care of,” Geunter says. “Make sure you are prepared to implement the best, most detailed management possible. Have a strong game plan and execute it daily. Have a strong team and make sure everyone knows and does their job to the letter.”

5. Consider bird environment
Mike Edwards entered the industry in 2017 with more than a decade of experience working in the feed and nutrition business, where he focused on organic poultry production. Edwards was able to design his family’s organic broiler chicken operation near Milbank, Ont., to fit an RWA environment.

“With our new barn we aimed for lots of square footage,” says Edwards, who runs roughly 17,500 birds on eight-week cycles of about 37 days. “Having more space for the birds reduces the risk of disease.”

In addition to making more room for his birds, Edwards performs regular spot checks on the high-quality feed he buys to ensure it meets RWA and organic standards and nutritional specs. “We also use strategies in our feed to promote gut health, including several different feed additives that work well,” Edwards adds.

6. Stay on top of vaccines
On the turkey side, Dunnville, Ont.’s Dirk Heeg switched his two-barn, 400,000-kg turkey broiler and tom operation to RWA in 2011. His goal was to align with his family’s personal naturopathic values. Heeg says the timely and proper use of vaccines is critical to help avoid illness in birds.

“The first ones are done in the hatcheries now anyway, but you need to make sure to use cocci and E. Coli. and other vaccines in the barn,” says Heeg, who overcame issues with increased mortality rates during the first few years after he switched to RWA. “And find yourself a good vet who encourages antibiotic-free production.”

7. Stick with it
Heeg also cautions producers who switch to RWA against expecting perfection from the get go. “It might take a couple of years to work out the kinks and get things running smoothly because it is a different program,” he says.

“But once you do it goes well.  My birds stay healthy. And you don’t have the added costs and labour that come with antibiotics. And being RWA makes it a lot easier for the paperwork. You just have to answer ‘no, no, no’ when you fill in reports on what antibiotics you’re using.”