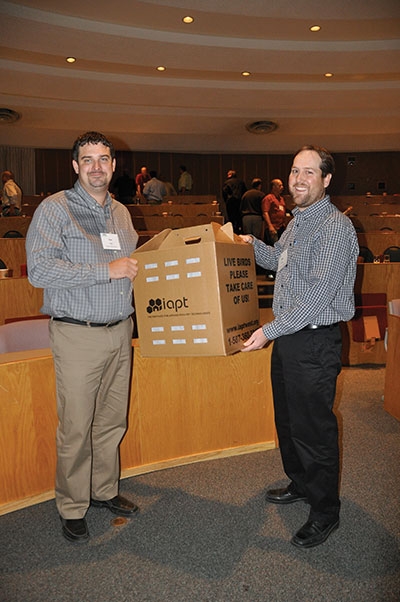 It’s currently a conundrum for those in the poultry industry when one or several birds must be transported, from a farm where there is a bird health issue to the lab, where various samples can be taken or a post mortem exam is conducted.

Often, the same boxes that have already been used to transport a potentially diseased bird are also used to move other birds – greatly increasing the dangerous possibility of cross-contamination. Live birds are also often transported in boxes that are too small. Overcrowding and a lack of adequate air flow from makeshift holes can lead to birds overheating and even suffocating.

“There was no standard live transportation box available nor clear guidelines or standards on space and airflow for these types of enclosures, which is a significant animal welfare concern,” says Nick Allan, general manager at the Institute for Applied Poultry Technologies (IAPT) in Airdrie, Alta., a non-profit organization created in 2012 by poultry industry stakeholders to evaluate innovative and cost-effective technologies.

It is for these reasons that Poultry Health Services Ltd. (an agency contracted to deliver veterinary services in Alberta in co-operation with the Ministry of Agriculture and Rural Development, AARD) supported the IAPT’s proposal for the development and manufacture of an enhanced live poultry transport carrier, now known as the Humane Biosecure Transport Carrier (HBTC). “A key challenge for me has been figuring out how to transport live birds within a service vehicle without risking the welfare and safety of the birds or the biosecurity of the vehicle,” notes Dr. Tom Inglis, a veterinarian at Poultry Health Services. “At the lab, our technical staff were concerned that birds didn’t always arrive in the right kind of containers, and that was not acceptable. There wasn’t a good solution for this problem, so we were behind the project one hundred per cent.”

To develop a prototype production-run box for basic proof-of-concept validation experiments and vetting with industry stakeholders, IAPT supplied personnel, obtained industry input and managed project funds. Poultry Health Services provided part of the labour costs and expertise in the design phase, as well as personnel and materials to perform pilot testing. Alberta Veterinary Laboratories Ltd. supplied logistics for shipping and material handling for the design and prototyping phases. AARD supplied lab facilities and equipment for the pilot phase, and is also aiding in the communications and extension component of the project. Funding for this project was provided in part by Agriculture and Agri-Food Canada’s Canadian Agricultural Adaptation Program, which is managed by the Agriculture and Food Council of Alberta.

Testing and feedback
Some of the prototype production-run boxes were distributed to poultry field representatives who routinely submit live birds to diagnostic labs, and then the boxes were evaluated in terms of detailed physical, biohazard and animal welfare criteria. “Following this evaluation period, we presented the findings at an industry stakeholder workshop in early October,” says Allan. Input was obtained in open consultation, and included a questionnaire. Among the results, most of the 45 respondents strongly agreed there is a need for this box. The majority also agreed that they would be willing to pay extra for a box with suitable animal welfare features, and that having the container waterproof is important. The feedback from this workshop led to the final modifications of the HBTC, and the project then moved into production phase.

Since completion of the project, two major field service companies have adopted the HBTC and have requested that the remaining prototypes be allocated for ongoing live transport in their Canada-wide operations. “Data collected from this distribution will be analyzed as part of the larger program application [to further study the HBTC],” Allan notes. There is no turkey-sized box at the present time, but Allan says they are prepared to look at this should industry stakeholders request it.

Other projects
The IAPT has an active internal research and development program currently developing novel vaccines and other health-related and poultry welfare products. Staff are also working to provide western Canadian poultry producers with easier access to advanced diagnostic services and production capabilities. “The institute’s mandate is to provide infrastructure for commercializing products, technologies and services that will give Canadian poultry producers a competitive advantage in serving local and international markets,” explains Allan. “This is done through pilot research studies, small-scale manufacturing and diagnostics.”

A current IAPT program involves a look at the applicability of commercial euthanasia technologies to improve animal welfare in Alberta’s poultry industry and beyond. This two-year initiative has an end goal of the potential adoption of a national welfare standard and assessment program for euthanasia. Commercial systems being studied include “single stage head to heart electrocution,” physical methods (non-penetrating captive bolt) and controlled atmospheric killing (gas, enhanced foaming system, low atmospheric pressure).

More practical end results such as that provided by the HBTC project would certainly seem to be welcome in the poultry industry, at least by Inglis. “There are times when we need to collect live, healthy birds which are representative of the flock they are coming from, or live, sick birds which are showing symptoms of concern, and in these cases we need an appropriate container to transport them in,” he says. “This is a simple problem but we haven’t had a smart solution until now.”