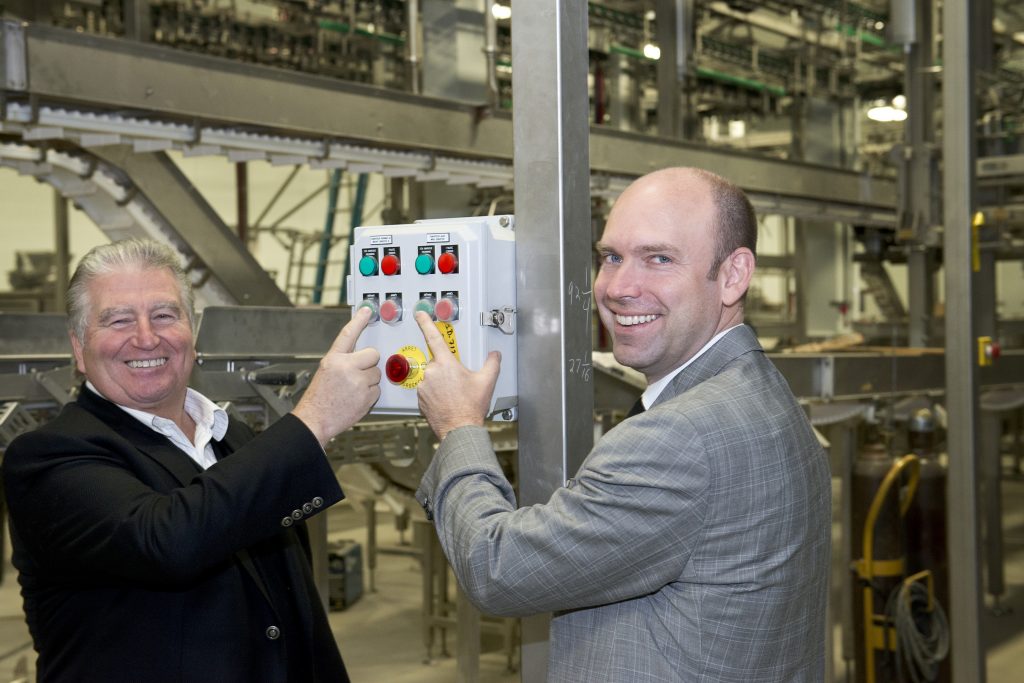 Nov. 5, 2012, Clair, NB – Olymel l.p. and Westco executives invited all managers and employees hired to date to operate the new Sunnymel poultry slaughterhouse and cutting facility at Clair to an open house and information day. In all, close to 250 people will be involved in operating the processing plant, which was built over a one-year period in the centre of the Village of Clair in the Upper Madawaska. The startup phase of the plant is scheduled for 19 November.

The new facility, which is equipped with the most advanced, most efficient machinery in the industry, required an investment of more than $50 million. The plant’s weekly slaughtering capacity will be 450,000 chickens once optimal production speed is reached. More than 250,000 chickens from the producer Groupe Westco, which have been shipped to Quebec for slaughtering since September 2009, will now remain in the province and form a large part of Sunnymel’s supply chain, with the remainder coming from other producers in New Brunswick and the Maritimes.

Speaking to the new Sunnymel employees, Groupe Westco President Thomas Soucy said he was delighted that processing New Brunswick chickens for New Brunswick was finally beginning. “For more than four years, despite many obstacles, we never stopped believing in our dream, and now that dream is becoming a reality. And the reality of the new Sunnymel plant is the creation of 250 jobs right here. It is also proof of our know-how and the strengthening of a healthy poultry industry for New Brunswick and the Maritimes. Our alliance with processor and distributor Olymel will allow New Brunswick chicken farmers to market their products and enjoy a direct line to consumers. I wish all our employees a warm welcome and a long journey of success with Sunnymel,” said Mr. Soucy.

The completion of the Sunnymel plant is the result of a business partnership between Olymel, a Canadian leader in agrifood processing and distribution in Canada, and Groupe Westco, one of the largest poultry producers in the country. In March 2008 the two partners announced plans to create an integrated entity on a model that would bring together the two firms’ specific expertise, generate synergies and create a farm-to-fork link they believe will better serve a market like the Maritimes.

Olymel President and CEO Réjean Nadeau then added that Sunnymel would quickly find a place in the Maritimes market. “Olymel is proud to establish a presence in New Brunswick, and thereby contribute to the economic development of the region and the province. Our partnership with Westco enables us to create a unified production chain in order to improve quality and offer customers and consumers an added value. The new plant will mean a prosperous future for all its employees, as well as the entire region. On behalf of the Olymel executive, I would like to thank everyone who helped make this project a reality, including the municipality of Clair, regional and provincial authorities and suppliers of goods and services. I would especially like to express our gratitude to all of you, workers and managers, who will bring this plant to life and make its success possible,” Mr. Nadeau concluded.

The open house and information day was a chance for future Sunnymel workers to get to know one another and their new employer, as well as receive relevant information on the operation of this type of business, its functioning, general working conditions and Sunnymel’s business objectives. A part from managers, all employees will be represented by the United Food and Commercial Workers Union (UFCW), Local 503, which has been recognized as an accredited unit at Sunnymel. Many skilled workers have been on the job for several weeks installing equipment and making preparations for the startup of operations.

In the coming weeks, employees will also participate in various training sessions on such topics as health and safety, hygiene and food safety rules, animal welfare and equipment operation. Operations at the Sunnymel plant are under federal jurisdiction and will be supervised by the Canadian Food Inspection Agency (CFIA) in conjunction with application of the Food Safety Enhancement Program (FSEP) and HACCP (Hazard Analysis Critical Control Points) norms.

Groupe Westco inc. is a New Brunswick company with its head office in Saint-François-de-Madawaska. The result of a common vision for expansion by many poultry producers, the company has become a model of success and profitability. Westco owns its own hatcheries, breeding farms, and shipping companies, and is also one of the largest poultry production organizations in Canada. The company has a strong commitment to the community, sponsoring several social programs and contributing to fund-raising initiatives in its region.

Olymel Canada is a leader in the slaughtering, processing and distribution of pork and poultry, with facilities in Quebec, Ontario and Alberta. The company employs more than 10,000 persons and exports nearly half its production, mainly to the United States, Japan and Australia, as well as some sixty other countries. Its sales stood at more than $2 billion last year, with a slaughtering and processing capacity of 160,000 hogs and 1.7 million birds a week. The company markets its products mainly under the Olymel, Lafleur and Flamingo brands.