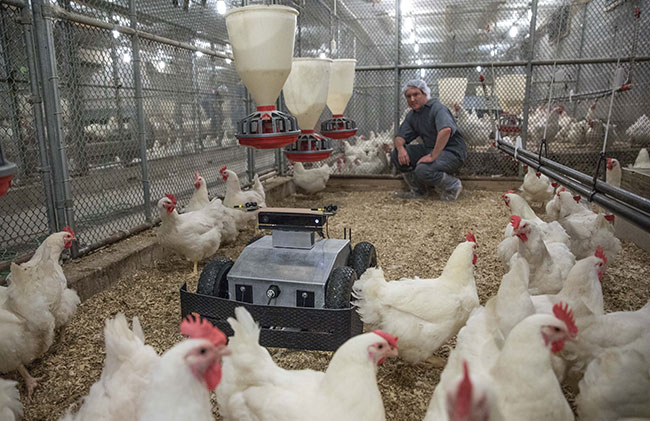 Scientists at the Georgia Tech Research Institute have equipped a robot to perform a variety of tasks around poultry barns. PHOTO CREDIT: Branden Camp.

Monitoring flock health and picking up floor eggs and mortality are time-consuming tasks that need to be done despite labour shortages. Humans, though, are primary vectors for disease, which means these tasks come with risks.

At Georgia Tech Research Institute, senior research scientist Colin Usher and his team are working on solutions to reduce the need for farmers and farmhands to enter poultry houses. Usher spoke at a recent Poultry Industry Council virtual event on applied research in robotics for the poultry barn.

Research at Georgia Tech started with a vision: What if a robot could operate autonomously in a chicken house every day, all day? Usher and his team believed it was possible to design a robot that could take on time-consuming tasks, like picking up floor eggs, checking machinery and monitoring flock health.

Research began in 2013. Almost immediately, the team faced its first challenge – flock density. At some point on its course, the robot was bound to encounter areas where flock density was too high to move. By attaching a bumper to the robot, they were able to bump the birds gently and coax them into moving out of the way.

Exploring possibilities
With movability addressed, they then began exploring everything they could do with a robot in the barn.

Using the GTRI Research Robot they developed, they explored applications that allowed the robot to navigate smartly through a chicken house. The aim was to be able to execute searches in the environment and map microclimates in the barn.

“With a vehicle on the ground you can get that climate at the level of the chickens,” Usher says.

They also explored which human tasks could be taken over by a robot. They wanted to know if it was possible to have a robot carry out jobs that require manipulation. Primary duties they explored include picking up floor eggs and removing mortality.

The autonomous robot is outfitted with an ultrasonic localization system similar to GPS, which does require some infrastructure, Usher says. But using this system, the robot knows its location plus or minus two centimeters in the house. 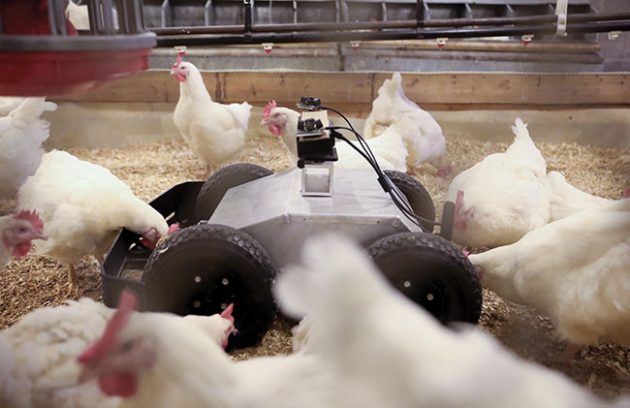 If after giving them a gentle nudge the chickens still won’t move the robot will plan a path around them.

Search capabilities
It was important that the robot also be able to search spaces. To do this, the team spent considerable time developing algorithms for searching.

“One of the key things is that we don’t want a system that is so technically cumbersome that a farmer has to hire a roboticist just to come and operate the system,” Usher says. “If we want to search an entire floor area, we want to do that while allowing minimal setup and minimal calibration and configuration.”

To do this, they came up with a method where the farmer can define location points that the robot had to go to. Each time the robot travels between those points it takes a different path. It also remembers where it has or hasn’t been and prioritizes areas it hasn’t been over those areas it has.

“If chickens block it from reaching a particular area, it might plan around them, search other areas of the house, and come back later and search the area that was not searched before,” he explains.

In this way, it allows the robot to search the whole area, which is important for identifying and removing all floor eggs and mortality.

Equipped with sensors
The GTRI Research Robot is also equipped with an environmental sensing suite that measures carbon dioxide and ammonia levels, as well as natural gas. It also includes a Geiger counter, which allows them to detect and measure ionizing radiation.

What’s more, the robot is rigged with a suite of 2D and 3D sensors that are used to detect individual eggs and chickens. Using an arm that’s fitted with a camera, the most recent model detects and collects floor eggs.

The camera guides the arm to the egg. If the egg is reachable, the robot picks it up. If it’s not immediately reachable, the camera switches to a wide-angle field of view and the robot makes micro-adjustments until it can grasp the egg. The entire operation takes 30 to 60 seconds. The research team is currently working to speed up retrieval times.

The next task the team took on was mortality detection and removal. The first challenge they faced was cost. The arm, which needed to be strong enough to pick up a 10-pound bird, came with a USD$20,000 price tag.  “That’s four times what it cost us to build one of our robot platforms,” Usher says.

Now, they’ve rigged the robot with a custom-designed arm that uses a worm gear to operate. The arm is sturdy and able to pick up 25-pound objects. It’s made with a lot of 3D printed parts; Usher and his team are designing a second-generation version that will be more robust. The overall cost for their custom-built arm is $1,000.

More than just a platform that removes eggs and mortality, the robot is also capable of collecting vast amounts of data as it moves through the poultry house. The latest model has a 360° camera with tele-op control, which allows farmers to view everything from equipment status to flock health to leg issues, and all from the comfort of the breakfast table without having to drive to the barn.

Future outlook
Beyond its current functions, Usher believes robots have great potential in the barn. In the future, he believes they could be used to perform a variety of other tasks, including disinfection, bacterial reduction, vaccination, and pest control.

“It’s really going to be interesting to see what happens as processing power goes up and costs go down,” he concludes. “It’s not a question of if, it’s just a question of when.”