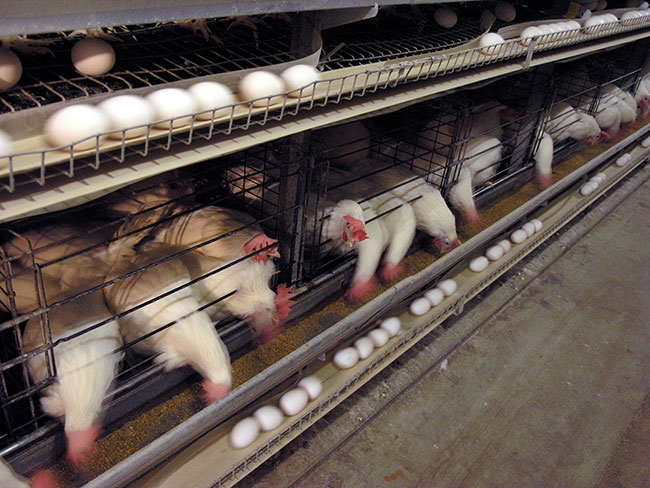 Alltech’s products, ForPlus and All-G Rich, are dried micro-algae fermentation products that can be added to laying hen rations to help with DHA enrichment of their eggs. DHA is an essential omega-3 fatty acid that the human body can’t produce.

Canadian egg farmers have a new opportunity to offer healthy eggs high in omega-3 to nutrition-focused consumers thanks to a recent decision by the Canadian Food Inspection Agency (CFIA).

The agency has given regulatory approval to nutritional products from Alltech that are based on algae and can be added to the diets of laying hens, dairy cows, and pigs to enrich eggs, milk and meat with DHA.

Docosahexaenoic acid (DHA) is an essential omega-3 fatty acid that the human body can’t produce. This means it has to be added through diet. DHA is linked to healthy brain and eye development, as well as reduced inflammation and cardiovascular disease and slowing cognitive decline in older age.

Babies and infants get DHA from their mothers during pregnancy and via breast milk and enriched formula after birth, but there’s a nutritional gap that develops as people get older, since most don’t get adequate amounts of DHA in their diets.

“Dietary sources of DHA are mainly fatty fish, which aren’t commonly found on the plates of Canadian consumers,” explains Nikki Putnam, a registered dietitian and nutrition solutions specialist with Alltech. “This means an opportunity exists for food producers to fill the nutritional gap by increasing levels of DHA in the human diet.”

According to the Nielsen Global Health and Wellness Report, an annual global survey of eating habits and trends, beneficial ingredients that fight disease and promote health are increasingly ranked as important by consumers around the world.

In North America, 21 per cent of  respondents indicate foods rich in unsaturated fats are important to them, a category that includes DHA-enriched products, and 20 per cent value sustainably sourced ingredients.

And there is some willingness to pay more, especially among younger consumers: 60 per cent of respondents under age 35 indicated they’re prepared to pay a premium for these attributes.

As well, DHA omega-3 had the highest impact on purchase intent among 23 per cent of respondents in Cargill’s Fatitudes Study, which was conducted in 2013 and repeated the following year.

“Eggs had the high cholesterol stereotype that gave them a bad reputation in the past, but now consumers are realizing that eggs are actually incredibly healthy and are the perfect protein, containing all nine essential amino acids,” Putnam says. “And they are familiar with cooking them and are already eating eggs so we aren’t adding anything new to their diet.”

Alltech’s newly CFIA-approved products, ForPlus and All-G Rich, are dried micro-algae fermentation products that can be added to laying hen rations to help with DHA enrichment of their eggs. There are already omega-3 eggs available in the marketplace, but these are enriched with fish oil or with linseed or flaxseed.

Using an algae-based additive means a DHA source that’s renewable, traceable, and 100 per cent plant-based, making the eggs suitable for ovo-lacto vegetarians – those who eat eggs and dairy – as well as a good fit with sustainability initiatives.

Putnam says there’s a common misconception that linseed and flaxseed are good sources of omega-3, but although they’re high in alpha-linolenic acid (ALA) – an omega-3 fatty acid that humans aren’t easily able to convert to DHA – DHA is where most of the human health benefits come from.

The other big advantage of the algae-based feed additive is it doesn’t change the taste or smell of the end product, nor does it have any impact on the birds.

“Although we’re enriching the DHA content for the end consumer, the eggs still look and taste exactly the same,” explains Kayla Price, poultry technical specialist with Alltech. “There’s also no negative impact on the body weight or performance of the birds themselves.”

It’s a question producers ask a lot, she says, adding that they’re interested in differentiation in the marketplace and want to offer different products to consumers, but at the same time are keen to protect their reputation for quality.

The algae used in the additive are grown in controlled environment fermenters similar to the process used to make yeast, and are then dried for use in feed rations. This means a very consistent, stable product with no contamination, according to Price.

“We’re using heterotropic algae, it is absolutely not the algae that you would see growing in a pond, for example,” Price says. “When the birds consume feed with this additive, they translate the high DHA content of the algae into higher DHA content in the egg.”

The DHA is specifically expressed in the yolk, so the current application is for eggs, but Alltech is actively looking into other market opportunities. And although the DHA will come through in milk and meat as well, Alltech has found that eggs are easiest to enrich – lower DHA levels can be used in the hen ration with higher DHA levels expressed in the eggs, compared to other livestock species.

Although the algae additives are being used in other countries, this is the first time they’ve been registered in the Canadian market with a DHA health claim; there is no approval yet for use in the United States.

“Algae is an exciting part of the Alltech portfolio – we’re a company based around yeast and yeast products, and our algae is grown and used in a very similar manner,” Price says. “This is an extremely sustainable way of producing a DHA-enriched egg and we’ve been getting good response to it from the industry.”

The additive is available to all feed companies in Canada, and egg producers are encouraged to speak with their nutritionist to learn more or have it added to layer diets.