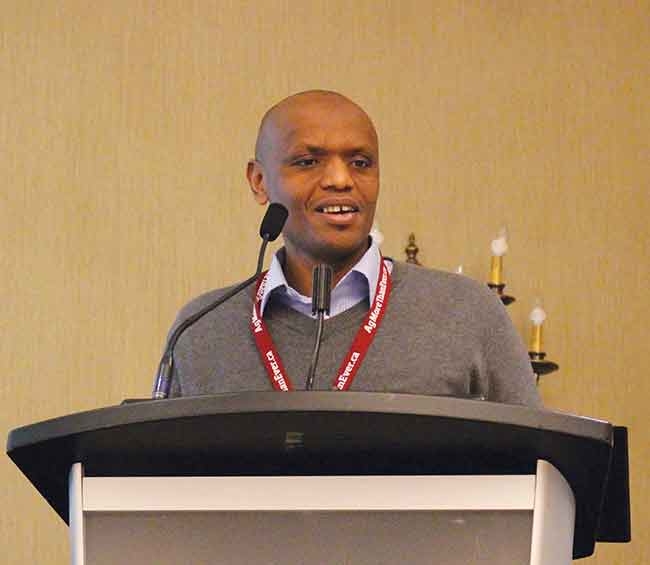 In his new role at the University of Guelph, Kiarie will pull together students, researchers, and funding from industry and government for projects and ultimately develop industry workers, bringing all these minds together to work as a team to help to place Ontario as a leader in collaborative, world-class poultry research.

Elijah Kiarie hasn’t lost sight of the fact that the poultry industry is a business. He knows farmers want to maximize their income and they want their farms to be sustainable. As the newly appointed assistant professor in poultry nutrition in the department of animal biosciences at the University of Guelph, he intends to lead the establishment of a world-class program in poultry nutrition with a focus on improving feed efficiency to help that important bottom line.

As farmers know, feed is more than 60 per cent of the cost of production. In Ontario alone, Kiarie estimated that with 200 million 2.4 kg broiler birds, improving feed efficiency by just one per cent would save the farmers in Ontario about $3 million. Across the country that would translate to $10 million in savings over half a billion birds per year.

But when Kiarie uses the term “feed efficiency,” it’s not just your typical feed to gain ratio. Feed efficiency can mean so much more than that.

What if birds could get more from their feed? The typical excretion rate on a corn/soy diet is up to 15 per cent. What if that could be reduced to 10 per cent? That would be more efficient. As hens are housed in larger spaces, will more nutrients be directed to activity rather than productivity, reducing feed efficiency?

Bone health is also a huge issue: the early nutrition received by the chick plays an important part in the strength of the skeletal system. That is part of a field called epigenetics – a field of research investigating how genes are expressed, right from pre-hatch. Can the chick get a better start?

What about antimicrobial use? Both governments and consumers are looking for alternatives. Can probiotics provide a solution? While Kiarie acknowledges manipulating the gut microflora involves more than just nutrition, with management factors also coming into play, what if slight changes in feed can reduce the need for antimicrobials in the first place?

These are just some of the questions to which Kiarie will be seeking answers. So far he has defined several issues that may be implicated in sub-optimal production, from variability in feed ingredients and the ability of the bird to digest their food, to water quality issues, high gut microbial loads, subclinical and clinical disease, leg problems, and environmental stress from ammonia. For both eggs and meat, these issues may represent areas where commercial production can be brought closer to genetic potential through nutrition.

All of these issues can be traced back to gut microbes. There are more than 400 species of bacteria in the gut – how can we make them happy? When you feed the bird you feed the chicken but you’re also feeding the gut microbes: improving efficiency means you want to only feed the bacteria the chicken needs. As Kiarie says, “If you’re feeding the wrong microbes, you’re wasting feed.“

The chicken is affected in a 360-degree cycle, he explains, starting with the fundamentals: a strong gut and skeletal system to perform. If you don’t have a good gut and skeleton you’ve missed an opportunity to deal with what he calls an “addressable gap.” In this cyclic pattern a chick grows on maternal nutrition, so the mother needs to be healthy; we can’t just look at the chick in isolation. With this cycle in mind, Kiarie is looking at the broiler breeders to address egg size and body weight management.

Kiarie earned his PhD at the University of Manitoba and his undergraduate and masters degrees at the University of Nairobi. He has been a research scientist at DuPont Industrial Biosciences since 2011. In his new role at the University of Guelph he will pull together students, researchers, and funding from industry and government for projects and ultimately develop industry workers, bringing all these minds together to work as a team to help to place Ontario as a leader in collaborative, world-class poultry research.

The current specific areas of focus for the poultry nutrition plan include neonatal nutrition, immunity and epigenetic responses; dietary factors that affect gut function and health, performance, and product quality; feed additives to improve gut health and feed utilization; researching alternatives to anti-coccidials and antibiotics; and looking at feedstuffs and processing methods.

Kiarie continues to work closely with monogastric and gut microbiology colleagues from the University of Manitoba where he researched different feeding strategies to improve gastrointestinal health and nutrient use in pigs and poultry.

During the first several months of his new job, Kiarie has met with producers at regional meetings, with industry groups and has spoken with feed company representatives and nutritionists to establish what issues are relevant to the Ontario and Canadian poultry industry. From here he will begin to generate letters of intent for research projects while continuing to publish his own research. While his task is complex, he says his greatest joy still involves answering questions from producers and training students.

His professorship position was made possible thanks to a donation by Ontario poultry farmers James and Brenda McIntosh to the university in 2013.