I’ve heard of the term coccidiosis before and know that medications are often added to the feed to prevent it. But what exactly is it and why is it important to watch for signs of it? 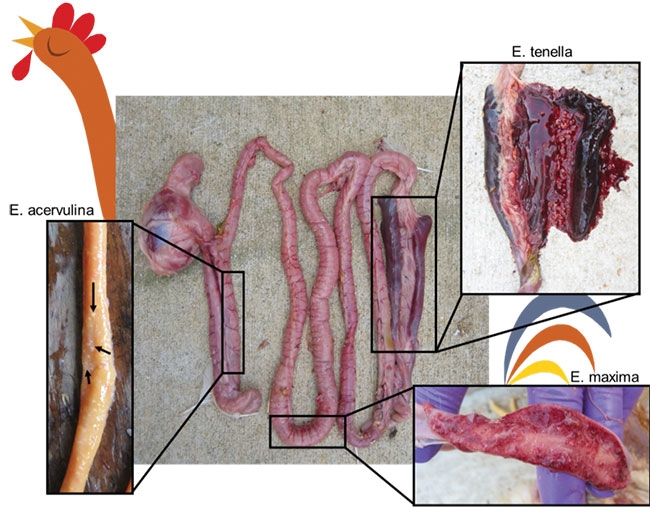 The latter two signs indicated are often associated with clinical coccidiosis, where signs of this disease are obvious. These signs, however, are less common than the other clinical signs listed, which often go unnoticed in a flock but can have negative effects on performance.

In turkeys
Species of primary importance:

Coccidial lifecycle
Poultry species ingest coccidial organisms and, upon infection of the gut, they replicate. Once a cycle of replication is complete, new oocysts are passed in the fecal matter from an infected bird.

Oocysts that are passed in fecal matter are initially non-infective. Once environmental conditions are appropriate (requires the right amount of oxygen, heat and moisture), the oocysts can become infective and once consumed by the corresponding species of poultry, the cycle repeats.

The non-infective form of coccidial organism is extremely resistant to destruction, Thus, we will continue to deal with coccidial infection in poultry species. You will never completely get rid of all of these parasites, no matter how hard you try.

When does coccidial infection become subclinical or clinical coccidiosis?
The answer to this question is tricky and depends upon two main factors, the number of infective eggs present and the frequency of consumption of infective eggs. All poultry at some point in production will be exposed to coccidial species, but not all poultry will develop clinical or subclinical coccidiosis. Some low-grade cycling of coccidial parasites in a flock is even considered normal or unavoidable depending on what preventative or control programs are implemented.

Some of the factors which impact the number of infective eggs present in a poultry environment include: temperature; oxygen; moisture; barn clean out; bird density; litter quality; feed availability; coccidial control programs; and other disease challenges.

To further complicate matters, many of the coccidial species that parasitize birds cannot be observed with the naked eye and microscopic examination is used for detection of these species. Knowing the factors listed above is also important in the interpretation of findings, understanding why a flock is affected with clinical or subclinical coccidiosis and in preventing the same problem in subsequent flocks.

Coccidosis monitoring
In consultation with your veterinarian, normal birds from a broiler chicken flock can be submitted for coccidosis scoring based on the system devised by Johnson and Reid. Higher coccidiosis scoring lesions indicate more damage to the gut. The cost of a higher coccidiosis lesion score on growth has been calculated through highly detailed experiments.

Vaccination is an alternate method of control, which relies on controlled exposure to coccidial parasites to stimulate a protective immune response. Coccidial vaccination also serves to re-populate the environment with coccidial strains, which are less tolerant to the anticoccidial medications often employed.

Along with the use of these different products, management of the flock and flock environment can play an important role in the success of the overall program. Certainly limiting temperature and oxygen would be a means of also limiting coccidial cycling, however this is not possible in the presence of live birds.

Controlling moisture level however is one example of a key area that can have a huge impact on the success or failure of a given coccidial control program. Too much moisture can encourage excessive coccidial cycling, even in the face of medications! Too much or not enough moisture can also negatively impact cycling of vaccine strains of coccidial organisms.

How is coccidiosis treated and what do I do if I think my flock has coccidiosis?
The products used for the treatment of coccidiosis are different from those used to control coccidial cycling. Treatments are implemented in response to clinical coccidiosis, or when subclinical coccidiosis is detected and having an impact on the flock. There are several treatment options available for coccidial infection and they include products such as amprolium (Amprol), Sulfa medications (such as Sulfaquinoxaline) or potentiated sulfa medications (Quinnoxine S).

Depending on the type of infection a flock is experiencing, one of these medications may be a better option that the others as each has optimal effect in specific locations of the gut. For example, coccidiosis due to Eimeria tenella, which results in bloody fecal droppings, is best treated with Amprol, which has a greater effect against this parasite in the ceca, compared to other coccidial species in other regions of the gut.

If you suspect your flock may be affected with coccidiosis, it is wise to consult with a veterinarian. It’s important to properly diagnos and monitor the coccidiosis as well as identify the species responsible.