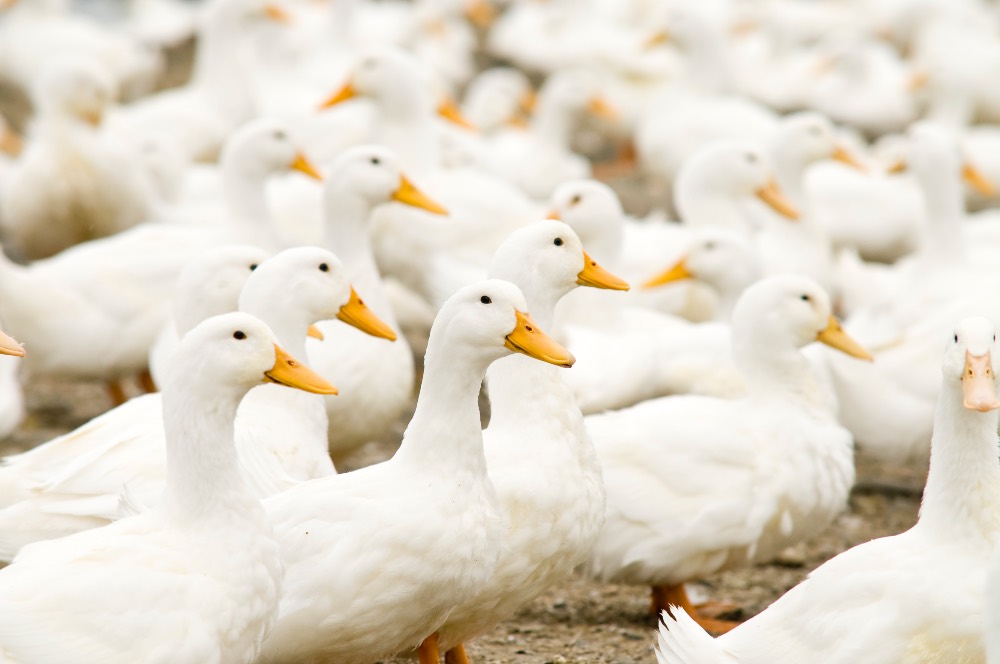 A Quebec duck-farming operation says three of its facilities have been devastated by avian flu, forcing it to slaughter 150,000 birds and lay off nearly 300 employees.

It will likely take six to 12 months and possibly several million dollars to fully restore the company’s operations, Angela Anderson of Brome Lake Ducks said in an interview Wednesday.

Brome Lake Ducks announced its first case of avian flu on April 13. Anderson said the virus was detected after employees at one of its sites noticed some of the birds getting sick and contacted a veterinarian, who recommended testing.

While only three of the company’s 13 sites were affected by the H5N1 virus, one of them contained all the company’s breeding stock, including 400,000 Pekin duck eggs that were ordered destroyed by the Canadian Food Inspection Agency.

Once birds that are in the pipeline at unaffected facilities are processed, the company will have to lay off staff because there will be no more ducks coming in, she said.

“Yesterday, I spent all of my day going to 11 different sites to inform almost 300 employees that they had no more jobs in four to five weeks,” Anderson said, adding that the number doesn’t include numerous tradespeople and delivery truck drivers who serve the operation.

“The situation is extremely emotional and extremely difficult.”

“We’ve been monitoring high-path (avian influenza) since 1959, and we’ve never had it in Quebec, so this is a first right now,” Vaillancourt said in an interview Wednesday.

Avian influenza, he added, has been present in wild birds for years but has not posed a significant risk because the level of contamination in the environment has always been low.

This strain, however, is stronger and more contagious, which means more virus is circulating, Vaillancourt said. The strain also has a longer incubation period than previous strains, leading to birds being potentially contagious for days before anyone realizes they are sick, he said.

He said the virus can enter a facility through contact with wild birds, adding that it can also be brought in on straw and litter, or even on the shoes of people who have walked near a pond where birds gather. While he said farmers shouldn’t panic, they need to be careful and implement biosecurity protocols.

Vaillancourt said that while it doesn’t pose much of a risk to humans, it’s so contagious that all animals on an infected farm need to be destroyed on-site to stop it from spreading. Left unchecked, the virus can kill half or more of the animals in a flock, he said.

Quebec’s first bird flu cases were detected in wild geese earlier this month, and several other provinces have already reported outbreaks in wild and domestic populations. As of Wednesday morning, the Canadian Food Inspection Agency had confirmed the presence of flu in four sites in Quebec, all in the Estrie region east of Montreal.

Anderson said it will not be easy restarting operations at Brome Lake Ducks, which is one of the biggest duck producers in Canada. She said insurance doesn’t cover animal mortality, adding that while there is some compensation from Canada’s food inspection agency, it doesn’t come close to covering the losses.

New animals will also have to be sourced from Europe, which is hit by its own avian flu problems.

Anderson said she’s hoping different levels of government will compensate the company for its losses and help it get back on its feet. While the company has faced other challenges, including a major fire in 2016, she said this is the biggest yet.

“Problems we can deal with, but this one is extremely difficult and the hill that we have to climb is very steep.”

Vaillancourt said climate change is likely playing a part in the evolution of deadlier viruses, because changing temperatures affect bird migrations, leading some wild birds to visit areas they had not visited before. Breeders, he said, need to be prepared for more viruses in the years to come.

“There’s a new reality, and this is not a one-year thing,” he said.