While supply managed boards and commissions were created to manage production and pricing, “our role and mandate has been broadened significantly,” Cook told producers at the BCBHEC annual meeting in Abbotsford. B.C., May 5. “Like it or not, the commission will be involved in regulating the (proposed new) biosecurity standards.”

The commission is already inspecting farms for the Canadian Hatching Egg Quality (food safety) program. Board inspector Angela McKee reached her target of certifying 15 farms by the end of last year and is working on the rest this year. She announced winners of the commission’s 2005 production awards. Named Producers of the Year were Allan and Marlene Roseboom of Eco Valley Farms in Chilliwack. John & Erna Federau of Abbotsfod were cited for the highest average hatchability while Tony and Dinah Bestebroer of Dibesto Farms in Chilliwack received the award for most settable eggs/hen.

Cook sympathized with producer concerns about board encroachment into their operations, saying that as an “independent businessman,” he too had “a healthy disrespect for inspectors.” 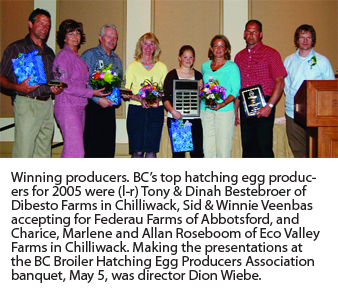 However, he stressed times are changing and “the reality is we have to adapt to those things.”

The target is to have B.C.’s new biosecurity protocols fully implemented by the end of January, 2007.

However that will not happen right away as EFP’s are voluntary, biosecurity is a provincial program and CHEQ is national.

“We are very disappointed with progress by the Canadian Food Inspection Agency,” Loyer said, noting they are still “only offering one third of the true value of broiler breeders.

If the prime purpose of the CFIA is to encourage early reporting, it is not doing that,” he charged, insisting hatching egg producers “are not getting the same compensation as other poultry or livestock producers.”

Both Breukelman and Cook noted the B.C. hatching egg sector is finally back in full production following the 2004 AI outbreak.

“Our last producer was finally back into full production in December, 2005,” Breukelman noted. To give all producers a chance to experience saleable chick pricing for at least one full cycle, the board will not decide whether to make saleable chick pricing permanent or to revert back to pricing on a per egg basis until mid-summer.

Producers also carped about rules being imposed by the B.C. Farm Industry Review Board although Cook admitted the commission “dodged a bullet” by not having to implement a specialty program for hatching eggs. Although the province’s supervisory board demanded all poutry boards institute special provisions for specialty production, they accepted the BCBHEC’s argument that their hatching eggs can be used for both mainstream and specialty production so a separate category is not required
However, the BCBHEC was still required to institute a new entrant program, funded by assessments on quota transfers, which rankled some producers. “We are losing producer numbers and aren’t going to get more producers because the economic numbers aren’t there,” they told both the commission and FIRB.

“Decisions are leaning too much toward processors,” a producer added, saying “I feel left out of the loop.”

FIRB chair Richard Bullock noted the Superboard is implementing “an economic policy put before us by the provincial government,” urging producers to “make presentations” to government about their concerns. However, he made no promises, instead stressing “if we see a problem, I’m not going to shy away from telling you you have a problem.”