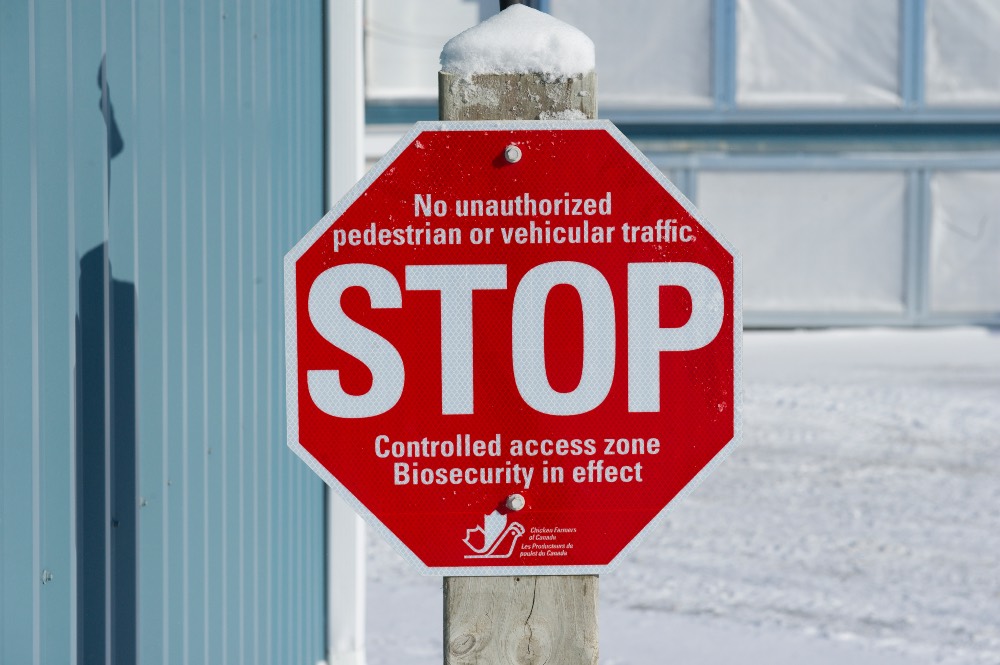 Growing cases of bird flu across Canada have left scores of chickens and turkeys dead, poultry farmers devastated, and Canada’s top veterinarian seriously concerned about the weeks ahead.

In less than a week, the H5N1 strain of avian influenza has ripped through three commercial poultry farms in southern Ontario, according to the Canadian Food Inspection Agency.

Those cases were confirmed after a red-tailed hawk in the Waterloo, Ont., region was found with bird flu 10 days ago.

The CFIA has placed those three Ontario farms under a strict quarantine and set up a 10-kilometre control zone to limit movement of animals. It’s also helped nearby farms put enhanced biosecurity measures in place to control the spread of the virus.

Dr. Mary-Jane Ireland, chief veterinary officer for the CFIA, said she’s worried about the days ahead given that it’s migration season for many wild birds that can spread the disease.

“It’s quite a devastating disease,” Ireland said in an interview.

“We are concerned, this is a high-risk period, and birds are migrating. We have detected it in Canada and more recently in Ontario … and that is why we’re asking people to take precautions.”

The bird flu outbreaks have led to 24 countries temporarily banning imports of birds or poultry products from parts of Canada and in some cases from the whole country, the CFIA said, although a farm stakeholder group has noted that Canada’s poultry production is largely for domestic purposes.

The risk to the general public is low. Bird flu is not a significant public health concern for humans, Ireland said, and food safety is not an issue, either.

The impact on farm operations, however, can be severe.

Avian flu began ripping through commercial farms in Europe last year and then hit the United States. It was confirmed in Canada on Dec. 22, 2021, with the CFIA saying it was detected on an exhibition farm on the Avalon Peninsula in Newfoundland and Labrador.

The virus was then found on Jan. 11 in a small flock on the same peninsula. The agency found it again in two commercial farms in Nova Scotia in February and a backyard duck and chicken flock in March.

“Infected birds can shed the virus in their saliva, their natal secretions and their feces,” she said. “And it can spread through contact with surfaces.”

Those surfaces can include shoes, litter, bedding feed and water, she said.

Anyone who has birds should keep them away from wild birds; frequently clean poultry coops, water, feeders and clothing; and control what goes in and out of a coop or barn, Ireland said.

Wild migratory aquatic birds are the major reservoir for the bird flu virus, she said.

“These birds, we think, have brought the disease into the area,” Ireland said. “And wild birds are migrating right now.”

Anyone who observes wild birds showing neurological symptoms, or farms that see sudden bird deaths, should contact the CFIA or a local vet, Ireland said.

The Feather Board Command Centre, a group of poultry farmers and members of the feed, process and service industries, helps respond to such emergencies, said its chair, Ingrid DeVisser.

“There’s a lot of stress on farmers, not just on the infected premises, but in the control zones right now,” DeVisser said.

With much of southern Ontario part of a natural flight zone for migrating aquatic birds, she said more outbreaks are expected.

“Farmers everywhere should be very aware of what is going on and be extremely vigilant on their farms with their biosecurity measures, whether they’re commercial farms or whether they’re backyard farms.

The board is helping affected farmers with cleaning measures and helping them navigate the paperwork involved with the CFIA and insurance companies after bird flu is found in their flocks.

She said all farmers, not just ones in the control zone, should be using dedicated clothing and boots when going into the areas where the birds are kept, using hair nets, masks, hand sanitizers and lots of cleaning.

Lisa Bishop-Spencer, a spokeswoman for the Feather Board Command Centre, said Canada doesn’t export much poultry so the temporary import bans as a result of the outbreaks aren’t having a significant impact.

“The Canadian poultry and eggs sector is a supply-managed sector, which means it provides for the domestic market primarily,” she said.

Ontario has recommended small flock owners and other zoological institutions avoid attending shows, swaps and sales at this time.

The Feather Board’s DeVisser, who is also a turkey farmer in Bruce County, Ont., said she’s constantly worried about the virus.

“We are just doing our utmost to be as vigilant as we can on our farm,” she said. “Watching our birds, keeping them healthy and doing whatever we can.”