The outlook is bright for this Canadian high-tech outbreak containment system – and its sister platform for flock health management. 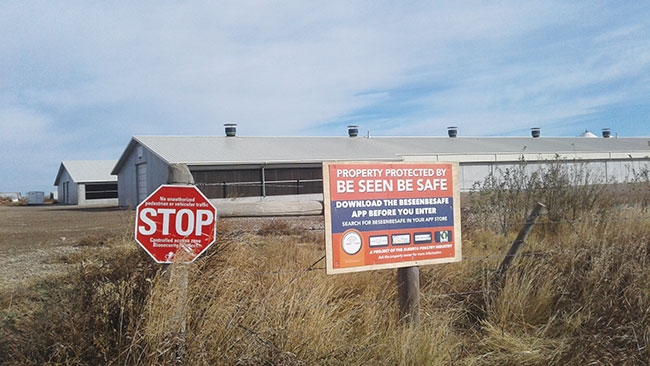 Be Seen Be Safe automatically gathers information on the traffic to and from farms within the system. photo courtesy of Tim Nelson

Now, the people behind these programs are using lessons they learned from poultry and pork farmers around the world to develop more powerful versions of the technology. The upgrades are set to be released this fall.

Inventor Tim Nelson first envisioned BSBS as a way to contain outbreaks and prevent them from turning into industry disasters, recording all visitors to a farm and analyzing the data in an emergency. With co-founder Joel Sotomayor, Nelson trialed BSBS in the Ontario poultry sector first, where he learned many lessons.

Quick refresher
As a quick review, BSBS automatically gathers information on the traffic to and from farms within the system. It involves mapping the geographical boundaries of farms with a GPS technology called geo-fencing. Once it’s live, anytime a system-ready vehicle or device crosses that boundary, the BSBS software platform logs the entry, greets the visitor with a message and notifies the farmer.

Information on all visits to a particular farm is stored for one year before being expunged. Farmers can access their online visitor logbook at any time using a secure personal login. Each farm and visitor are given system IDs and their actual identities are only accessed by authorized system administrators in an emergency outbreak situation.

In the case of an outbreak on a system farm, the program immediately analyzes the data, sets up quarantines and identified other potentially infected farms. It also sends out ongoing updates and biosecurity guidance. However, everyone who visits the system farms, including veterinarians, feed and pullet deliverers, salespeople and so on, must be onboard.

The system first relied on a cellphone app to alert it as to when a device, person or vehicle enters or exits a farm. “Although we’ve found the cellphone app to work perfectly here in Canada on all three of the major global smartphone platforms, there have been some issues in Spain and the U.S.,” Nelson notes.

“We’re not sure if it’s a cellular coverage issue, a smartphone issue or something else, but we’ve decided that we’re going to go another route for gathering farm exit and entry data. We’ve found a very economical new method to collect this information, involving a sensor on the farm property and a small dedicated device that will be carried by people or in the vehicle.”

This, however, does not solve another issue that BSBS has come up against in the past, including in Ontario – the fact that everyone who regularly visits farms must part of the system for it to be effective. “After working with many commodity associations, it’s become clear that they simply don’t have the authority to make sure everyone is taking part,” Nelson explains.

“We, therefore, are now working with major companies and it’s going very well. Companies can completely enforce a rule that anyone entering company properties must be on board, and that is crucial for the system to work effectively.”

Lessons learned
Since the many pilot projects and installations of BSBS and FHM began several years ago, Nelson and Sotomayor have learned a great deal from farmers, veterinarians and others in the ag industry about how they might make both systems much more useful.

“We designed BSBS as a way to contain outbreaks, and FHM as an early warning system for identifying possible disease issues,” Nelson explains. “After much research and analysis, we’ve modified the design of both systems so that they provide much more, and can also work together.”

FHM originally was an app which allowed farmers and veterinarians to report on symptoms they observed in their birds or livestock, using word descriptions and also through uploading pictures or even short videos from their barns. The system detects if similar information is being reported from two or more farms within a given area and then sends out a blanket warning across the region, alerting farmers and vets to check their animals carefully and report as needed.

“After speaking to many poultry, swine and dairy farmers, we understood that they wanted something that would do much more than let them report on symptoms and be alerted if the same things are being seen nearby,” Nelson says.

“They want a comprehensive tool to better manage the health of their flocks. They want to be able to do a barn check on a daily basis and record any symptoms, any changes in feed consumption, water consumption, keep track of what samples we take and send to the lab for analysis, test results and so on.”

While a lot of farmers keep excellent production records, Nelson notes that they don’t tend to keep flock health records in the same way – making it difficult, when faced with anomalies, to get to the bottom of the irregularity and solve it right away. “It’s not efficient to have to call up the vet and ask for the details of what happened a few months ago,” he says. “Now, FHM keeps those records of past health issues and you can keep a record of all your mitigation efforts as well. And you can also do barn-to-barn comparisons and flock comparisons in the same barn over time.”

The upgrade was supported through a prestigious Eureka grant, and also involves integration of the BSBS and FHM systems.

Sharing data
This fall, BSBS and FHM will be available separately or as an integrated package. (Note that BSBS requires a ‘network administration team’ to identify any farms where an outbreak has officially occurred, thereby triggering its outbreak containment function.)

If the systems are integrated, BSBS is able to access FHM reports on symptoms and analyze other data, helping the farmer and veterinarian build a story, as Nelson describes it, about the flock health issue and take appropriate action sooner. “Say there’s a certain symptom you have in your birds,” he says. “The system will look at whether there has been a drop in feed intake or water intake yesterday or over the last few days. Also, things like were any visitors to the farm in the days just before that? So, it builds a picture for better decision-making. And it now includes wind direction and speed data, as well as reported sightings of sick or dead wild birds and wild bird movement – important during spring and fall migration.”