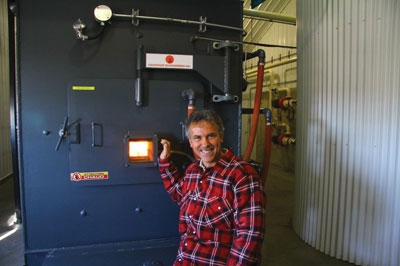 This éconoserres 4,125,000 BTU boiler heats water to 90 C before circulating it to five broiler houses, two garages, a grain dryer and the family house. André Dumont

When René Gélinas undertook a conversion to biomass heating in 2010, he investigated every aspect, recalculated everything and questioned the recommendations of experts. In the end, only one detail had escaped him: just how much better his broilers would do.

Gélinas and his wife Lise Grenier operate five broiler houses and farm 350 acres with three henhouses on one side of the road, two on the other, along with a grain-drying bin, two garages and a family house. And yet, all of this is linked to a single hot water distribution system, without energy and water pressure loss.

Right from the start, Gélinas figured he’d better do a bit of investigation into the process on his own. Different contractors had differing advice about pipe diameters; and he also had serious doubts about the suggestion that he should insulate the pipes himself.

“’I checked everything, from the beginning to the end,’’ he said. “But it’s a good thing I did my own research, otherwise I would have had major problems with hot water distribution.’’

Gélinas had spoken to a farmer who knew he hadn’t insulated his pipes properly, because the ground above remained snow-free in the winter, which needed to be avoided at all costs.

Surfing the Internet, he found Urecon pre-insulated pipes. The 6,000 feet he ordered from the Danish company were shipped by boat.

‘’When the piping got here, we had no idea how to unroll it!’’ Gélinas remembers. ‘’I called a drainage contractor. He suggested I start by unrolling it in a field and let it sit under the sun. He saved my life! Afterwards, it was really easy to install.’’

After that, trenches were dug between all the buildings and the pipes; electrical wiring and security alarm wires were also laid and buried.

The 4,125,000 BTU (or 1210 kW) boiler is from Chauffage éconoserres, a company from the Beauce region, south of Quebec City. An auger feeds the boiler in real time, bringing the biomass in from a large shed. Gélinas uses mostly chipped demolition wood and hardwood residue from a sawmill that sells to furniture manufacturers. When Canadian Poultry visited, downgraded barley seed was also being fed into the biomass mix.

The boiler can take biomass with anywhere from five to 30 per cent humidity – but the dryer the material, the more efficient the combustion.

“’Everyone is calling to offer biomass!’’ Gélinas says. With offers coming in from everywhere, supply is surpassing demand and Gélinas figures that at current low prices, it is not worth investing in equipment to fetch biomass from his own woodlots.

Still, biomass is not for everyone, Gélinas believes. Installing a boiler and hot water piping requires a great financial investment: One must purchase the feedstock and store it, keep an eye on combustion and perform regular maintenance tasks – for some, propane and pellets are still the simpler choice.

Boiler maintenance at Ferme Thomchyrs takes about four hours, every three weeks. ‘’I have more maintenance to do than with propane burners, but I also have less problems with my broilers. I spend less time around my birds, therefore I can allot more time to my heating system.’’

Gélinas had calculated he would need eight to ten years of energy savings to recoup the $500,000 (after subsidies) he put into his new heating system. He hadn’t thought that the system’s profitability would be improved by better technical performances among all of his broiler lots.

The chickens seem to prefer the ‘’two-speed’’ hot water system.  Radiant tube heaters stretch the whole length of the houses, distributing soft and even heat. ‘’Birds get under the tubes and stretch their wings. They are comfortable,’’ Gélinas says.

When the winter’s coldest days arrive, suspended forced air hot water heating units kick in and eliminate the use of oxygen-burning propane. Because of that, birds can breathe better and grow in a healthier, drier environment.

This results in better weight gain and less mortality of the birds. For every lot, there’s a little more money going in the farmer’s pocket.

Gélinas is so thrilled with the enhanced comfort his broilers are enjoying that he recommends all poultry farmers consider hot water heating, whatever the energy source may be. However, he warns that each boiler and each hot water distribution system must be perfectly adapted to the size and the specific needs of the farm.

But what if biomass heating one day becomes more expensive?

“’Tomorrow morning, I can produce my own biomass using my woodlots,” he adds. “And if I don’t like biomass anymore, I keep my hot water system and switch it to propane, oil, electricity or… solar!’’