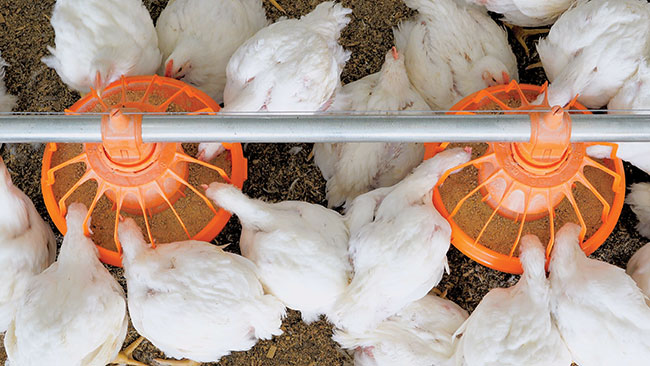 Like many researchers in Canada and around the world, Doug Korver is exploring effective, practical alternatives to antibiotics in poultry production. His team at the University of Alberta are getting ready to feed fermented canola meal to broilers to validate the probiotic properties of this altered feed ingredient.

A professor in the Faculty of Agricultural, Life and Environmental Sciences, Korver is part of a multidisciplinary team looking at antibiotic alternative, led by University of Guelph’s Shayan Sharif. Working with food microbiologist Dr. Michael Gaenzle, Korver and graduate student Vi Pham are heading into the final testing stage of fermented canola meal as a probiotic feed additive. “If we can work with something already in poultry diets that has a probiotic effect and brings other health benefits, that’s very promising,” Korver says.

The phenolic acid she extracted from fermentation was then added to poultry pathogens in the lab – Salmonella, Campylobacter and Clostridium perfringens. “The good news is we learned that fermentation increases the antimicrobial activity of phenolic acid, compared to unfermented canola meal,” Pham says. “And this is important news for bird health and human health.”

Many prebiotics and probiotics are being explored to arm birds with better gut health for a stronger stance against infection. “What our research has shown is that by fermenting canola meal with lactobacillus bacteria, you are essentially converting the phenolic acid that is already there into more potent antimicrobial compounds that are naturally present,” Korver says.

From lab to live birds
For an antibiotic alternative to be successful, it has to work in commercial production. While the team’s research looks promising in the lab, new alternatives must also be easy to incorporate into commercial operations. To get one step closer to that possibility, Korver and Pham are moving into the live animal testing portion of their work. They’ll be fermenting canola meal on a larger scale to incorporate into the daily diet of broiler birds.

Broilers will be fed diets that contain fermented canola meal for the trial work set to take place this spring/summer at University of Alberta research facilities. The team will collect digestive samples to look at the levels of microbes. “We’ll be looking to demonstrate that fermented canola meal is effective at reducing potential pathogens in the chicken gut,” Korver says. “We’re focusing on two human pathogens – Salmonella and Campylobacter – and a poultry pathogen – Clostridium perfringens.”

To test efficacy of the altered meal against Clostridium – the causal agent for necrotic enteritis – they’ll use a challenge model to induce necrotic enteritis and determine if the fermented canola meal reduces the incidence and severity of the disease.

As a feed ingredient, they’ll also be calibrating how much of the fermented canola meal to add to the broiler diet. “We’ll test a few different levels of inclusion in the diet, and then based on the results we’ll be able to choose the optimal level for further testing,” Korver says.

They will look at the impact of fermentation on the nutritional characteristics of canola meal, and also track performance measures on the birds, including growth, feed conversion, nutrient digestibility and carcass yield.

The big goal in the gut
The main goal with any antibiotic alternative is not to eliminate bacteria from the gut or all troublesome pathogens, but to make it difficult for pathogens to establish, proliferate and cause problems.

“In our challenge model, we’re looking to create chaos in the gut to see how well fermented canola meal can reduce the chances for Clostridium perfringens to take hold,” Korver says. “When there is chaos in the intestinal tract, there is competition among the microbes and an opportunity for Clostridium to outcompete other bacteria.”

And that’s where probiotics come in. “It’s important to ensure the gut is stable and probiotics occupy ecological niches in the bird gut that prevent pathogens from establishing,” Korver says.

Farm-friendly alternatives
The big questions for Korver – and others searching for antibiotic alternatives – is how to come up with alternatives that are as economically efficient as possible so the industry can incorporate them. He knows there isn’t going to be one product that will work as well as antibiotics have, and that combinations and different strategies are probably the path forward. But it’s also why he is so encouraged by their results. “This work is so interesting because, in a single step, we have used two different mechanisms – the antimicrobial phenolic compounds inherent in canola meal and the lactic acid used for fermentation – to create a possible new alternative.”

While the fermentation process shows promise for unlocking the antimicrobial properties of canola meal, the research team know the process still needs some work as it produces a wet feed ingredient. If they can make it work on a small scale, and the live bird results show as much promise as the lab work, they’ll look at how to make it a practical process. That may include options for on-farm fermentation, as well as looking at the possibilities of a dry, stabilized fermented canola meal.