A look back at when catastrophic floods hit B.C.

Disaster struck the heart of the province’s poultry sector late last year. Here’s a look at the impact on poultry farms and the industry’s response. 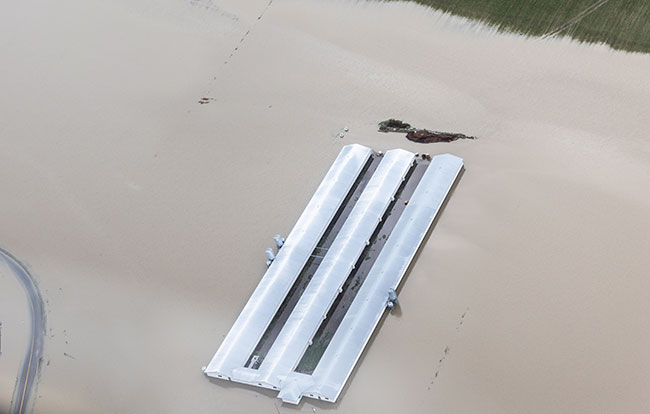 In November, a series of atmospheric rivers led to catastrophic flooding and mudslides in an area of B.C. known for its poultry farming industry. Photo: Province of B.C.

In mid-November of last year, Dave and Sheryl Martens’ broiler operation was at the end of its production cycle. Suddenly, disaster struck.

The farm, called Bright Meadow Farms, is located on the Sumas Prairie east of Abbotsford, B.C. The area is home to the majority of the province’s poultry, dairy and pig farms.

The Martens family shipped out the 40,000 chickens on the second floor of the barn for slaughter on Sunday, November 14th. That was the day the Nooksack River in Washington burst its banks. But there was no news of this until the next day.

“The birds on the bottom floor were to be shipped on Monday,” Dave Martens explains. “The trucks were on the way, but they couldn’t get through. I dimmed the lights in the barn and called Trouw Nutrition to see about getting feed fast, as it might be difficult later.”

On Tuesday, Martens moved various pieces of equipment to higher ground, just in case the farm was flooded. After lunch that day, 12 tonnes of feed arrived. But sure enough, at about 5:00 pm, Martens’ fears were realized. There was water lapping against the barn door. He faced limited options.

“If I turned off the breaker to the barn, the birds would die without ventilation,” he says. “We didn’t know the dike by the Sumas pump station had burst, but we saw the water was rising fast. I went to the neighbours’ house to warn them and by the time I left there, the water was close to a foot deep. There was nothing to do but leave the farm. At 8:00 pm, I knew the barn was flooded because the barn temperature was low. The sensors were clearly underwater.”

At the peak of the flood, the water depth at Bright Meadow Farms was over seven feet. Sadly, all 40,000 of the chickens on the bottom level drowned.

Like the Martens family, other producers in the region had their worlds turned upside down by the November floods. In total, “there were 61 poultry farms in the evacuation zones,” reported Amanda Brittain in mid-December, director of communications at B.C. Egg and the B.C. Poultry Emergency Operations Centre. Her comments also represent the B.C. Chicken Marketing Board. “The vast majority of the birds died by drowning. To the best of my knowledge, euthanasia was not needed on a large scale. That being said, common sense tells me that farmers must have euthanized a small number of birds that were suffering.” Carcasses were removed and transported to several compost sites.

It was a heartbreaking total given to the press in mid-December 2021 of animals that died due to the flood: 628,000 birds (broilers, broiler breeders, layers and turkeys); 12,000 hogs; and 420 dairy cows/calves. In addition, 110 beehives were destroyed by the floods in lower mainland B.C. The historic rainfall in November had shattered more than 20 daily provincial records.

However, Brittain reported that the impact of the flood on chicken supply was minimal. She explained that there are poultry farms in many parts of the province and those not affected by flooding were able to supply most of what was needed at the time. Also, some poultry products came in from other provinces.

Collaborative effort
The Society of B.C. Veterinarians Chapter of the Canadian Veterinary Medicine Association organized communications and coordinated assistance efforts among veterinarians and other industry members. The Canadian military helped with flood issues and evacuated birds from one affected poultry farm.

In addition, the B.C. poultry industry associations worked collaboratively with the City of Abbotsford, the Ministry of Agriculture, Food and Fisheries and the Abbotsford Police Department through the worst days of the flooding.

“Together, we ensured farms had feed, potable water and fuel,” Brittain says. “We were able to use several methods. The police or military would escort trucks to farms via flooded roads (only large vehicles could get through) and in other cases, boats (privately owned or provided by the city or police) would be used to take supplies to farms. In one case, a helicopter was needed to drop supplies to one farm. Finally, farmers helped each other out by driving tractors over flooded fields with fuel for generators.” 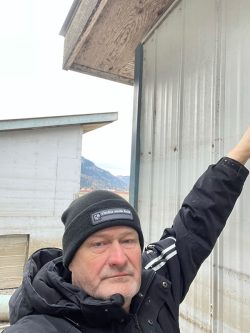 Farmer Dave Martens lost 40,000 chickens due to the flood in Sumas Prairie in Abbotsford, B.C.

Heartache and stress
Dealing with any natural disaster takes a toll and “we are concerned about farmers’ mental health,” said Brittain, “as we’ve experienced a lot in the past few years including the pandemic, the heat dome, forest fires and now the flood.” The Ministry of Agriculture, Food and Fisheries and AgSafe provided mental health resources. The heat dome incident in June caused the death of 595 people, at least 651,000 poultry and an estimated one billion marine animals.

At the same time, Brittain reported that the offers of help from individuals, church groups, sports teams and others has been overwhelming. “So many people called us wanting to donate cash that we created a page on our website that lists organizations accepting donations and organizing help,” she said.

For their part, the Martens are very grateful to over 40 people from their church and community (and some as far away as Vancouver) who helped clean out their house and assisted in other ways over many days. The barn and house will need complete renovation and decades of memories have been destroyed.

However, on top of the devasting flood, on the weekend of December 11th, the Martens’ house and property were looted along with other nearby properties. “We saw them in our fields and got the police and some people were arrested,” Martens says. “I’d gone through a lot of emotions by that point, but I hit a new low when we discovered we’d been looted.”

Getting feed to farms
When the flood hit on November 15, it was all hands on deck for those at Trouw Nutrition and other companies in terms of getting feed to farms. Trouw has a mill in Chilliwack, B.C., on the east side of flooded zone, which was also cut off from ingredient supplies. Regional sales manager Jared Webster explains that on Tuesday the 16th, Trouw and other local feed mills started holding conference calls to collaborate on getting feed to farms.

“We split up customer lists so that each feed mill would serve farms closest to it,” Webster says. “As a company, we worked around the clock with local emergency officials to nail down access routes and our drivers were amazing. They had to navigate in knee-deep water during the night to deliver to farms they had never delivered to before. For one driver, the water on one farm was higher than his boots when he arrived, so he went in his bare feet to fill the farm’s feed bins. We all worked 24/7 for three weeks straight.”

By the week of December 8th, Hwy 1 (the TransCanada) was opened, along with other roads and rail lines. “I’m really impressed by the collaboration of our industry to make sure we could feed all the animals,” Webster says. “We learned a lot but we all hope this won’t happen again.”

Recovering and rebuilding
Brittain reported in December that as the water receded, poultry associations have helped farmers clean and disinfect their farms so they can be ready to place new birds. Support will be provided in whatever form is needed, as long as it’s needed. “Everyone has been working very hard and we’re going to get out of it,” says one B.C. poultry veterinarian who doesn’t want to be named, “but there’s still a lot of work ahead.”

Like other farmers, Martens has been moving forward diligently since the flood. Some of the chicks intended for their farm were taken by other producers, which provides some income, and the Martens are luckily in a position to grow a remaining portion of their quota at their barn at another location that hasn’t been used for a while. Martens’ 95-year-old father Erwin lives nearby (his mother died some time ago). “He’s very supportive and is helping tend the chicks while I am busy coordinating the re-build,” the producer says.

However, the financial picture is difficult for him. “Because it was an overland flood, the insurance company has rejected both flood damage and business interruption claims,” Martens says. “But rejection of the business interruption claim is hard to comprehend. I am covered for loss of the last flock, which almost cover the feed costs for the last flock.

“Some of my quota has been leased out to other producers, which will provide some income over time, as will the birds on other farm. I’m hopeful my bank will provide bridge loans until compensation comes from the federal and/or provincial government. They need to step up. The costs to get the house and barn back to normal are many hundreds of thousands of dollars. The government also has to get involved in regulating the insurance industry in Canada.”

Martens notes that if the B.C. government and the federal government had not ignored recommendations from at least two reports on protecting the Sumas Prairie, this flood would have been prevented. The Sumas Prairie was once a shallow lake that was drained in the 1920s. “We are only 1,000 voters in this area but we produce a very large amount of food,” Martens says. “The government needs to get its chequebook out.”

He adds, “It’s one day at a time. I look for a glimmer of hope every day to find something positive.”

The impact of the BC flood: a snapshot