An update on research projects around preventing microbial infections in poultry production. 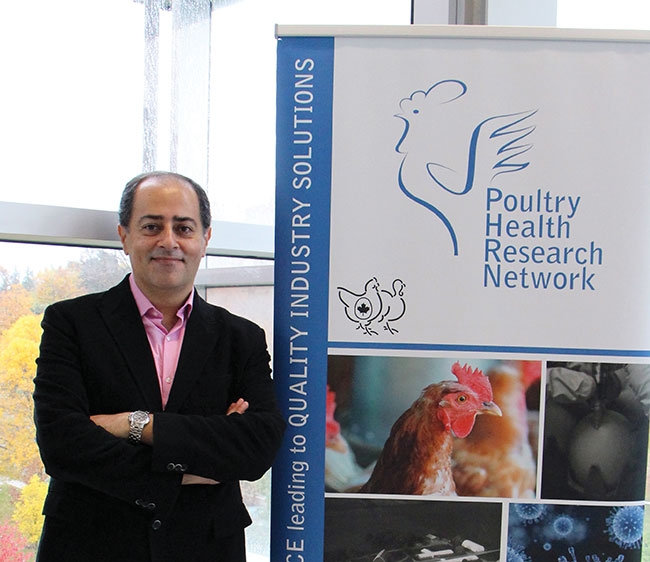 Development of effective alternatives to control NE is a considerable component of the antimicrobial stewardship research.

Antibiotic stewardship research is presently the most important priority for the poultry industry, as evidenced in the third poultry science cluster.

Necrotic enteritis
Necrotic enteritis (NE), caused by the C. perfringens, is one of the most prevalent diseases in poultry. NE is an increasing concern with the planned reduction of non-therapeutic antibiotics from poultry production in Canada. Development of effective alternatives to control NE is a considerable component of the antimicrobial stewardship research.

Two projects investigate controlling NE. Shayan Sharif (pictured above) from the University of Guelph (U of G) leads a large multidisciplinary project aimed at reducing the use of antimicrobials in poultry and enhancing poultry gut health. It includes researchers from the University of Alberta, University of Prince Edward Island, Hospital for Sick Kids and Agriculture and Agri-Food Canada (AAFC).

Three projects will look at developing vaccine-based strategies for NE control. Martine Boulianne from the University of Montreal will lead two separate projects to develop vaccines against C. perfringens in an effort to control NE.

The projects will target surface proteins and membrane vesicles of C. perfringens and bacteriocins as antigens for protection against C. perfringens. Eva Nagy from the U of G is developing an oral vaccine to induce an immune response against NetB to control NE in chickens.

A project led by Arshud Dar from the U of S aims to identify both in ovo and post-hatch administration of immune stimulants and antimicrobial peptides for prevention of C. perfringens infection and NE control in chicks. Bogdan Slominski, University of Manitoba, is continuing research from the second poultry cluster to enhance the biological activity of yeast and yeast-derived products on poultry microbiome composition.

Campylobacteriosis, Salmonellosis, Yolk sac infection and Colibacillosis
Salmonella and Campylobacter are present in the intestine of poultry without causing major clinical signs. However, on transmission to humans, these microbes can cause food-borne illnesses. Conversely, early chick mortality (ECM) is one of the crucial factors that determine the quality of chicken production and the economic return from a poultry production unit. Yolk sac infection and colibacillosis are the most common and major infectious diseases leading to ECM.

Within the large multidisciplinary and collaborative project led by Sharif, sub-projects led by Korver, Parkinson and Rodriguez-Lecompte will additionally aim to identify and evaluate probiotic formulations for their ability to enhance gut-health in chickens and in preventing Salmonella and Campylobacter infections.

Similarly, in addition to the research described above, Arshud Dar will optimize in ovo administration of immune stimulants for control of early chick mortality due to yolk sac infection and colibacillosis in young chickens.