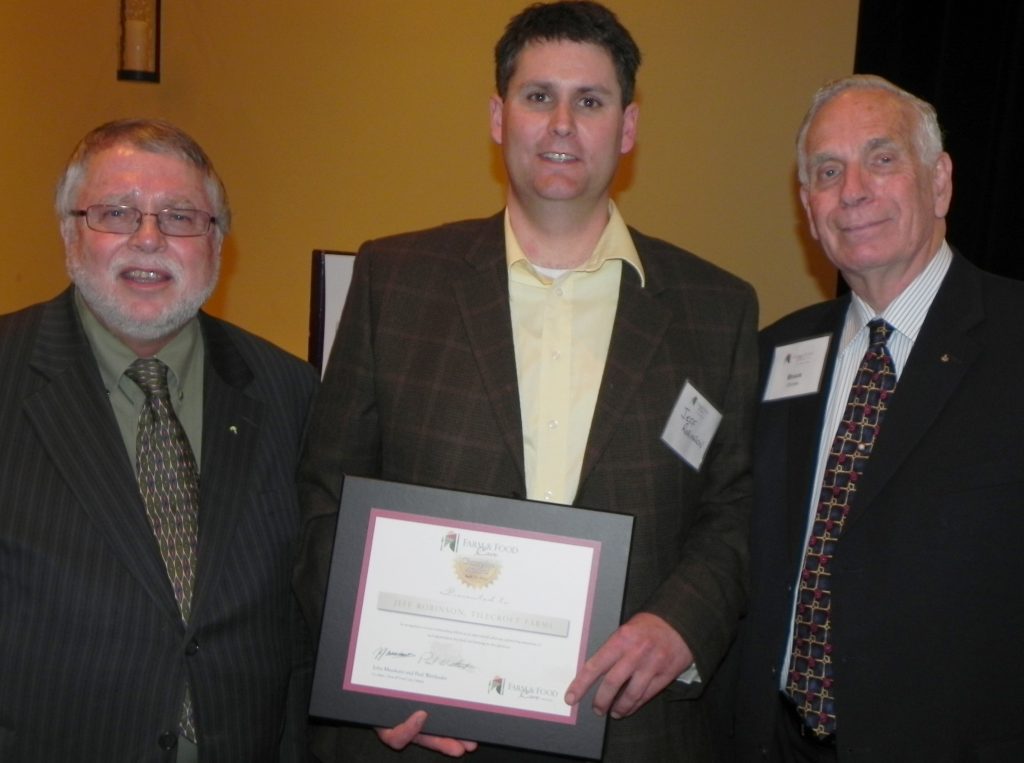 Apr. 18, 2012 – Jeff Robinson of Osgoode, Ontario, has been named the recipient of the inaugural Farm & Food Care Champion Award.

The award was presented at Farm & Food Care’s first annual meeting on April 17. Robinson, an attendee at the meeting, was a surprised recipient of the honour bestowed upon him by Bruce Christie, a Farm & Food Care board member, and Minister Ted McMeekin, Ontario Minister of Agriculture, Food and Rural Affairs. Robinson was nominated for the award by the Ottawa Federation of Agriculture and Ontario Pork.

Nominators described Robinson as having an “innovative and entrepreneurial spirit”. Although not raised on a farm, he said that it was the “diversity of the industry” that attracted him to farming. He’s continually upgrading his exhibits to keep them fresh and interesting – adding live animals, video components, interactive quizzes and games.
He and his wife Eleanor, both graduates of the University of Guelph, operate Tilecroft Farms, a third generation family dairy farm.

Each summer, Tilecroft Farms hires students to work both on the farm and at the road show events. Jeff believes that agriculture is an exciting, diverse and challenging industry with many opportunities which is why he gives his students a diverse summer employment experience – both working on the farm and off, talking to the public about farming. Jeff’s also taught and been a guest speaker at the University of Guelph’s Kemptville college over the last several years and says that the interaction with the students helps him to keep “thinking outside the box”. Jeff and Eleanor were finalists in the Ontario Outstanding Young Farmer competition in 2008.

The Friend of the Ontario Farm Animal Council (OFAC) Award was created in 1999 to recognize individuals, organizations and businesses that have helped to inform the public or the agri-food industry about animal agriculture. With the recent amalgamation of the Ontario Farm Animal Council and AGCare, the award has been renamed the Farm & Food Care Champion award and will be presented annually to a worthy agricultural advocate.