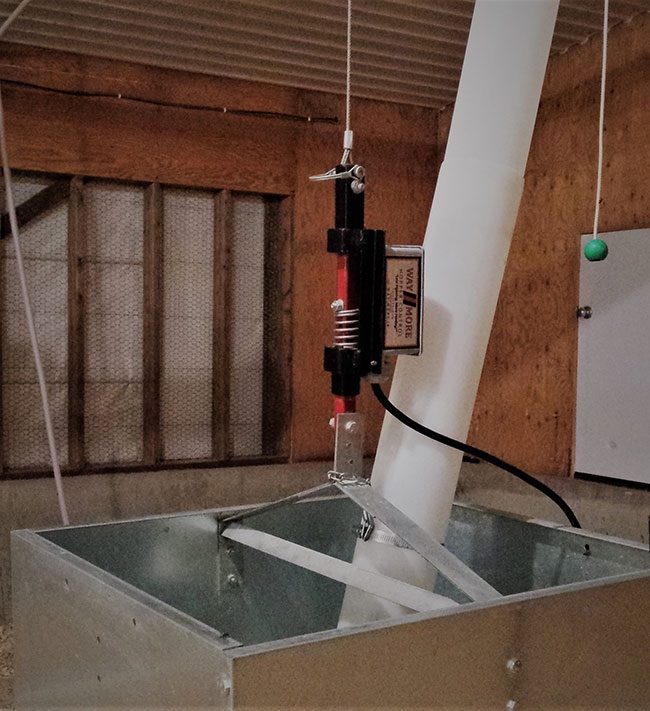 The device attaches to the hopper suspension cable and the other end is affixed directly to the hopper box hanger. It successfully eliminates feed outage situations that occur when using feeders with control switch failure points.

Necessity is the mother of invention, as we all know, but Wayne McCauley knows this better than most. He’s nothing less than the inventor and commercializer of a new disruptive poultry-feeding technology.

McCauley has had a lifetime of poultry farming, having been raised on an Ontario turkey farm and working as the manager at Schlegel Poultry since it began operations 10 years ago. During his 30 years of farming poultry, he’s obviously seen a lot of different products and techniques for daily operations – and, of course, he’s also experienced the frustrations and aggravations of equipment failures.

When Schlegel’s Ailsa Craig, Ont. operation was just getting going and McCauley was picking out equipment for the barn, he “was delighted to find out we were using a spring style, weight-activated feeder control – an alternative to the challenge-plagued flap design of hopper control.”

However, it wasn’t long before the feeder control began to break down. “Some problems were similar to the flap-style switches, in relation to micro-switch failures and causes, and others were unique to its own design,” McCauley says. “I recognized some areas where these problems could be rectified, and also [how the problems] highlighted the importance of protecting the micro-switch, without compromise.”

A better feeder control
It wasn’t long before McCauley had a vision in his mind of what a better feeder control needed to do, and took the plunge. First, he thought the entire design through. Then he created a prototype that allowed for testing of not only its function but also its performance in a real barn, under dusty and warm conditions, during cleaning and so on. After the prototype proved itself, McCauley began work on a more compact design, and with that the Way-More Hopper Control was born.

The device successfully and continuously operates feed fill systems, eliminating outages that occur when using feeders with control switch failure points. The Way-More attaches to the hopper suspension cable and the other end is affixed directly to the hopper box hanger. When the hopper fills with feed and its weight increases, the Way-More extends. Once it reaches beyond a certain point, it will turn off the switch and stop the fill auger.

There are no sensitive electronics or proximity sensors in the design – technology that McCauley says is sensitive to handling and various conditions and can also fail at random. “With its square tubular design, when affixed to the hopper as required, my device is not permitted to rotate,” he adds. “This overcomes a challenge where rotation causes a micro-switch to fail to contact, or contrarily causes excess pressure and damage to a micro-switch and its protective covers, causing a failure.”

McCauley also designed the Way-More with a greatly overrated micro-switch electrical load, one that will easily absorb current and will not burn out prematurely or even in the event of motor shorts or short cycling of the motor (which can be caused in other manufacturers’ designs by slight bumps or due to dust or moisture holding a micro-switch in the closed/run position). “It’s a reality that dust, water, flies, other insects and clearance holes required for the micro-switch operation affects reliable operation of feeding systems,” McCauley explains.

“I am using a micro-switch design that requires a contacting force to apply pressure to the lever and turn on the circuit, so you would expect something somewhere must penetrate the enclosure and contact the lever. To make this coupling of force, I utilized the help of magnets and their specific force of repelling. It provides an invisible medium to apply pressure/force on the micro-switch lever, throwing the switch without ever having to penetrate the enclosure. Very securely bonding a magnet to a micro-switch lever, enclosed within a sealed electrical environment, restricts any contaminants from affecting the operation of the micro-switch.”

On the device, there is another magnet on a sliding tube. When positioned in the empty state of the hopper, the magnet’s close relation holds the micro-switch in a closed/run position. As the feeding system is filling the hopper, the mass of the feed is increasing in the hopper and the magnet’s interacting forces become weaker, causing the spring action in the micro-switch to snap open the circuit to stop the filling process.

And the cycle continues when the feed is pulled through the system, causing the hopper to become lighter in mass and the spring pulls it up tight, bringing the magnet’s interacting force into a range overpowering a spring force in the micro-switch, causing it to close and run the fill system again. McCauley has patented his switch design and the entire process by which the Way-More fills and controls a hopper fill system.

The device attaches to the hopper suspension cable and the other end is affixed directly to the hopper box hanger. It successfully eliminates feed outage situations that occur when using feeders with control switch failure points.

The road to market
Along the way, there were challenges with sourcing readily available materials that would work within the design constraints, as well as finding the most compatible magnets. All in all, McCauley built and trialled over 40 devices. “I tried destructive testing and abusive testing well above its normal day-to-day experiences and I was unable to get it to fail,” McCauley recalls.

“After pressure-washing it and seeing an instance where the device and hopper box blew across a driveway and into a field like tumbleweed on a windy day, I picked it up and plugged it in and it ran perfectly. These units are now over six years old and still running perfectly. They have passed the testing phase with excellent results and ready for marketing.”

On the way to commercialization, additional challenges awaited him, as is normal. To bring the device to market meant McCauley had to cultivate confidence that the product he had developed “has a justified place in the industry to fit in and work, but it also has the potential to seriously disrupt the current products available.” Time was always scarce with his full-time job and the rest of his life, and he had to fit in various tasks during the weeks and weekends whenever he could, including more recently working on the Way-More branding, marketing strategies and planning the roll-out and production process.

“I currently market the product through the website and through word of mouth…[and] I have had the chance to talk about my device at a local producer update meeting and throughout the trade shows or other networking events,” he notes. “I hear of Way-More’s feeding device coming up in discussions from long distances away.” McCauley has sold over 100 units throughout Ontario and he has a steady stream of orders.

“To have developed a capable component for the industry and commercialized it on my own is a great feeling,” he says. “I am very proud of my progress and success so far, and looking forward to directing it into the mainstream competition. I am confident that my device will excel in the industry and I would put it up against anything out there.” McCauley plans to establish a manufacturing facility and set up distributorship across Canada and into the U.S., so that Way-More becomes a country-wide recognized company, “finally,” he says, “putting an end to the problems with feeding systems, forever.”

Pathway to invention – The steps, some famous Canadian examples and what’s to come.
There are five general steps to inventing any new product:

Of step 4, poultry farmer Wayne McCauley, inventor of the Way-More feeding device, says exposing his product to extreme barn conditions was key for him to be sure it was worth bringing to market. “It was a long process, and exposure to repeated washing, maximum dust, maximum flies and so on proved that the microswitch was completely insulated from the environment,” he says.

Some notable made in Canada inventions include insulin, peanut butter, Superman, the snowmobile, IMAX and more. On the farming front, ground-breaking Canadian creations include canola, the CracklessEgg wireless sensor, the BIOvator composter and Be Seen, Be Safe biosecurity technology. A very new innovation from Saskatchewan is DOT, a precision ag equipment platform that can be run by remote control or in completely autonomous mode.

Canadian agricultural innovation is recognized every year through competitions such as the Premier’s Award for Agri-Food Innovation Excellence in Ontario and the national Farm Credit Canada Innovation Awards.

And stay tuned. In the next issue of Canadian Poultry, you will get the latest details on the extraordinary new Canadian invention that identifies the gender and fertility of chick embryos.

Related
The Role of Automatic Feeding
Poultry farmer wants to slaughter own animals
Vandals burn poultry farmer’s beloved bear sculpture: ‘Everybody is so upset’
Does Biddy Know More About Feeding Than We Do?
Tags