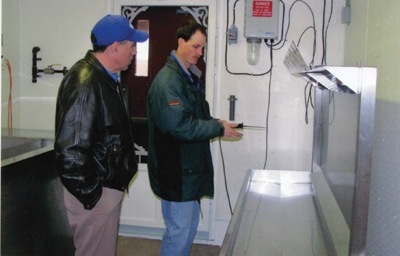 A Nova Scotia farm family has moved its poultry operation farther up the value-added production chain.

Beth Taylor and her son Cameron have been custom-killing poultry for small backyard flock owners for several years now at their farm in Centre Burlington, Hants County.

Cameron said they wanted to open up for licensed producers. “There is a shortage of processing capacity in the fall when the heavy slaughter period comes. That is the main reason we expanded to a provincially inspected plant.”

They intend to process 500 birds a day, two to three days a week, he said.

The Taylors now slaughter chickens, turkeys and waterfowl from a wide area of south-central Nova Scotia that stretches from Lunenburg to the Annapolis Valley, the Halifax Regional Municipality and the Musquodoboit Valley.

Cameron remarked flock owners come a considerable distance to have them slaughter their birds. “So there must be a need for this plant.”

The Taylors run the abattoir with the help of Cameron’s father-in-law, Gilford Shrum. But when they increase production, they will look at adding more employees.

Feltmate said the Cogmagun abattoir’s processed and inspected poultry could go to retail sales in farmers or roadside markets, or for the flock owner’s home consumption.

Free-range poultry must be slaughtered in a provincially inspected plant, he stated, and any poultry products sold at roadside or farmers markets must be inspected.

After eviscerating and chilling the carcasses, they store them in a chill room prior to shipment for sale.

Before building their new abattoir, they got advice from Feltmate, said Cameron. “A few years ago we talked to him about what we wanted to do. He has been with us since we started this project.”

Nova Scotia agriculture minister John MacDonell, speaking at the Taylors’ abattoir’s open house and grand opening, said Nova Scotia Department of Agriculture personnel are really committed to rural Nova Scotia. “I am glad we were able to help. I remember the day he [Cameron] came to my office. We had a long discussion.”

MacDonell considered their abattoir “a key component of on-farm diversification. This is something we want to see in Nova Scotia. We are not a monoculture like the west.”