What is it, how does it impact poultry and how can producers combat it? 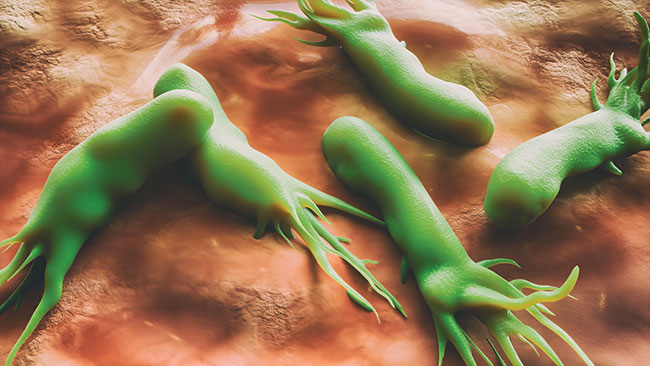 Foodborne illnesses are some of the leading causes of gastrointestinal upset in humans globally. These illnesses can be caused by various organisms but some of the most common culprits are bacteria such as different Salmonella and Campylobacter species. In the EU, diagnosed sickness due to Campylobacter, specifically Campylobacter jejuni, impacts two per cent of the population or approximately nine million people annually.

In the U.S. and Canada, diagnosed sickness due to Campylobacter impacts around 0.4 per cent of the population, approximately 1.5 million people in the U.S. and another 150,000 in Canada annually. In Canada, C. jejuni is the third leading cause of foodborne illnesses and hospitalizations. These numbers could be higher, as many illnesses go unreported or have unknown causes.

There are 18 different Campylobacter species, but three are commonly known to cause problems and infect animals and humans: C. jejuni; C. coli; and C. lari. The most common species to cause illness in humans is C. jejuni, and it can live in the intestine of most warm-blooded animals.

In the EU, U.S. and Canada, the most common source of Campylobacter is through consumption of improperly cooked chicken and turkey meat. While it is important to cook foods to their appropriate temperatures (e.g., 74 to 82°C for poultry meat and eggs as well as maintain cleanliness in the kitchen), it is also important to reduce contamination of these products before they reach the grocery shelves. An infected group of chickens has been shown to be 30 times more likely to result in contaminated carcasses, versus non-infected or low infected birds.

There are different methods to check for carcass contamination that include neck testing, because this is an area where contaminated juices can run off, as well as breast skin testing and cecal testing. Often, the numbers of Campylobacter are high in the ceca, as this is where the bacterium predominantly colonize.

Cecal Campylobacter numbers can be a good indicator of on-farm infection and the evisceration process at the processing plant should remove most of the risk.

Since Campylobacter is often found in poultry, the realistic goal is not elimination, but rather reduction of the amount of contamination in a bird. In the U.K., there is a move to reduce the percentage of chilled-carcasses with more than 1,000 colony forming units of C. jejuni to below seven per cent in the supermarket. In the U.S., the number is no more than 7.7 per cent in raw chicken parts or 1.9 per cent in ground chicken from the processing plant.

How do Campylobacter species survive?
Campylobacter species are spiral shaped rods that form and “S” and have an ability to glide. These bacteria are slow reproducers and grow the best at 42°C in a microaerobic atmosphere, where oxygen levels are around five per cent versus the 21 per cent oxygen in the dry air we breathe.

These bacteria are sensitive to drying out, changes in the movement of water in and out of bacteria, very high and very low temperatures.

Seasonal trends such as increasing temperature or increased precipitation have been shown to have an impact on Campylobacter contamination.

Methods of transmission from animal to animal include insect activity and reproduction, increased animal stress and reduced protection, or poor biosecurity. In Canada, an increase of outside temperature by nine °C for chickens and 10°C for swine has been associated with 10 per cent higher odds of finding a positive Campylobacter sample.

Consequently, in Canada the potential of finding a higher number of positive Campylobacter samples would be elevated June to November.

These bacteria have multiple unique strategies to survive, such as:

Under commercial conditions, young poultry are often free of Campylobacter and this is, in part, due to maternal antibodies, maternal protection, that are passed to the young bird and last until around two to three weeks of age. If Campylobacter is detected on a farm, it is usually detected between two and five weeks of age.

Once Campylobacter is detected in one bird on the farm it can quickly be moved between birds in the flock and can stay in the intestinal tract for several weeks. The most common form of transmission is through exposure to infected feces. Other transmission routes can be through insects, rodents, other animals, water and anywhere feces or bacteria can be found (e.g., footbath water, boots, transport modules and farm clothes). There have been very few reports of Campylobacter being transmitted through the egg.

In other research trials, a moderate to high cecal coccidiosis challenge, Eimeria tenella was associated with a higher level of C. jejuni replication in the ceca and cloaca. Several strains of Campylobacter have been found to be resistant to both tetracycline and fluroquinolones.

Depending on the age of the bird when infected, the impact on the bird can be different. If the bird is infected at a young age such as three to five days old, which is rare, the bird can have watery, mucous diarrhea with a decrease in weight gain and there could be instances of mortality. What can also be seen at this age is an accumulation of gas, seen as bubbles, and fluid in the ceca that can be released as light coloured, foamy droppings. Nevertheless, there are other bacterial and dysbacteriosis issues that can create the same signs.

In older birds, C. jejuni has been shown to have some negative effect on the structure of the intestinal cells, promote an inflammatory and protective immune response with no regulation, and more diarrhea compared to non-infected birds. The level that these signs were seen varied depending on the bird.

The change in the immune response has been suggested to alter the intestinal environment that can promote other opportunistic or bad bacteria. Additionally, this change and micro-damage to the intestinal tract may change the physical barrier to allow it to be leakier and let other bad bacteria pass when they should not. In cases where there was a disrupted microbiota from antibiotic treatment, the birds reacted to a C. jejuni infection with microscopic lesions, an immune response and diarrhea. In the barn, the diarrhea can lead to wetter litter and other issues associated with this. 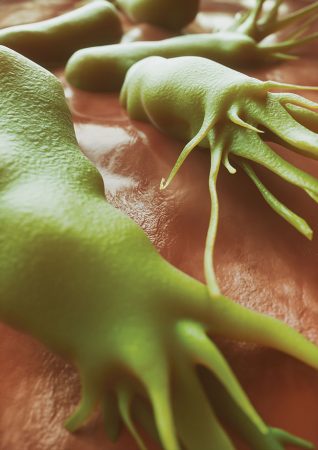 The most common source of Campylobacter is through consumption of improperly cooked chicken and turkey meat. PHOTO CREDIT: © crevis / adobe stock

Some innovative regions have used removal of carcass necks, rapid surface chilling, ultrasound pulsed seam and secondary scalding. They’ve paired this with strong hygiene measurement that can include settings on different equipment such as pluckers, evisceration equipment and bird washers.

However, if the load of Campylobacter in and on the bird is high then it is more difficult to appropriately clean the carcass at the plant. As a result, processors and producers need to work together to reduce this foodborne pathogen using processing plant methods and on-farm strategies.

To control Campylobacter on farm, producers must take a mixed approach. Since Campylobacter can be transmitted through many different means including insects, rodents, water and dirty boots, equipment and clothing, it’s crucial that producers have a strong biosecurity, cleaning and disinfecting program. For biosecurity, it is essential that protocols are obvious, easy to follow and are followed every time regardless if it is visitors, farm staff, catchers, a weekend duty or during a quick task.

A simple solution of having barn specific slip on boots or “overshoes” that fit and are available for visitors and staff with a separate area for dirty shoes can help to reduce boot contamination. A boot wash can be effective only if it is frequently cleaned, free from organic matter like litter and soil and people keep their boots in the wash for the appropriate amount of contact time. Additionally, it is important to have a strong insect and rodent control program to help reduce the possibility of these animals introduce or transmit bacteria.

Some other strategies experts have been suggested to help control Campylobacter on the farm include using vaccines, bacteriophages, water and feed additives. For a vaccine to work it would have to protect against multiple Campylobacter types and provide good protection against further infection. Currently, vaccines have only been able to show partial protection and there are many hurdles to overcome in order to commercialize.

Bacteriophage therapy has been suggested, using viruses that infect bacteria, but have yet to find a targeted phage and, like vaccines, there are many hurdles to overcome. Other groups have used various methods such as probiotics, competitive exclusion, short and medium chain fatty acids and mannan rich fractions to change bacterial colonization.

Short and medium chain fatty acids have been found to have some success at reducing contamination of the water but not in the ceca. Competitive exclusion products, i.e. contain cecal material from healthy chickens, and some probiotic combinations have been used to try to “out compete” Campylobacter in the ceca with some success.

Mannan rich fraction has been found to reduce cecal Campylobacter; however, its full mode of action continues to be researched. Some theories strongly suggest indirect methods to support a diverse intestinal microbiota that supports balance, other theories are related to supporting intestinal integrity as well as natural defenses. Regardless, all these feed and water additive methods would only be a part of the full control solution.

Mathematical simulations that look at the potential for humans to contract Campylobacter suggest that a decrease in Campylobacter counts by two log units, i.e. 0.30, could reduce the incidence of human Campylobacter 30-fold.

A combination approach that includes control from the processing plant as well as on farm with a mixture that includes biosecurity, cleaning, disinfecting as well as water and feed additives are crucial to reduce the risk of human exposure to Campylobacter.

Dr. Kayla Price is poultry technical manager for Alltech Canada and is an expert in poultry intestinal health.