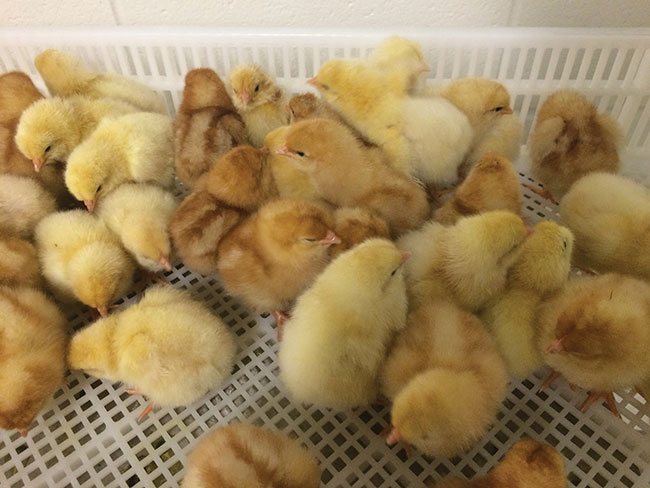 Adding light might be the key to more robust chicks that are ideal for antibiotic-free production.

Researchers at Dalhousie University and the University of Saskatchewan (U of S) found that providing lighting during incubation positively affects the hatch, post-hatch and egg production performance of laying hens. More specifically, chicks incubated with red LED light had improved navel health, early body weight gain and egg production without any negative impacts on the eggs they ended up laying as adult birds.

The study, which Rathgeber conducted in collaboration with Karen Schwean-Lardner of the Department of Animal and Poultry Science at U of S, included two incubation trials where eggs were incubated for three weeks using different colours of LED lights and varying amounts of darkness and light.

In trial one, chicks incubated with red light gained the most weight as a percentage of their original weight. What’s more, they produced an average of 27.6 eggs during their first 47 days of egg laying, compared to only 25.1 eggs from those hens that had been incubated with white light.

None of the lighting conditions resulted in any noticeable impact on egg quality.

The current industry standard for incubation in commercial hatcheries is one without any light, so moving towards including light into the incubation process would not be without cost to the hatcheries.

“There is a cost for putting light fixtures in, but we work with LEDs where the cost of operating is very small – and the cost of fixtures is coming down in price,” Rathgeber says.

Behaviour after hatch
Schwean-Lardner’s work involved evaluating chick behaviour after hatch under different lighting wavelengths. She observed no behavioural differences after hatch as a response to the incubation light colours, but chicks that were subsequently housed under a darkness-light cycle were more active than those in constant or near constant light.

“Traditionally, producers use constant or near-constant lighting because the thought was that this lets birds see the barn and find water and feed,” she says. “But, a light-dark cycle actually made the chicks more active.”

Schwean-Lardner and her graduate student, Celma Eliete Ferreira dos Santos, completed a small subsequent study at U of S where they conducted chick quality assessments and watched bird behaviour. They did so to evaluate the influence of various light-dark cycle lengths in the incubator and hatcher.

“We found chicks incubated on an 18-hour light, six-hour darkness cycle started to hatch considerably sooner than birds with no light – so potentially, a shorter hatch period could reduce the incubation cycle at the hatchery,” she says, adding they noted no differences in post-hatch chick quality or behaviour.

Many other factors besides light can influence how chicks respond though. The trials were also relatively small. Thus, both Rathgeber and Schwean-Lardner caution that more research is warranted to confirm the outcomes and explore further impacts on bird behaviour.