An experienced producer’s view of broiler production innovations over the last 40 years. 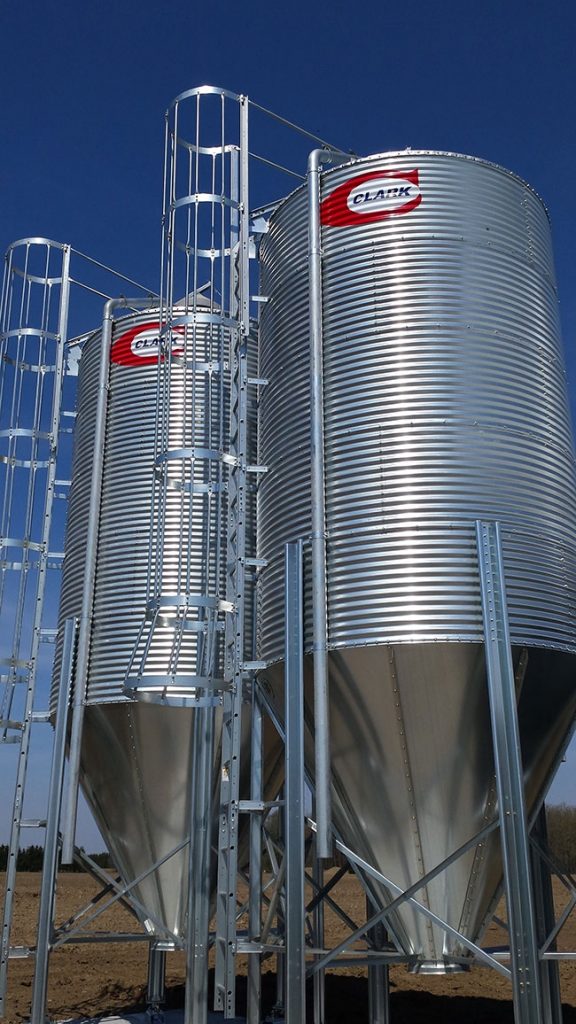 Feed bins are now galvanized with powder coating on the inside to prevent rust and improve an even flow of feed.

Paul Leatherbarrow grew up on a mixed farm and began helping his parents with broiler chickens and other farm chores about 50 years ago when he was a teen. “Obviously, so much has changed,” he says. “It was nine weeks for a production cycle and now it’s five weeks.

We had blue comb, blackhead and so many other health problems, and the breeding companies have eliminated a lot challenges, but they still exist. Genetics, barn systems and so much more has all changed.”

At a recent Poultry Industry Council ‘Innovations’ day, Leatherbarrow, from Clark Poultry Farms, spoke about all the changes – and the recent innovations – he’s seen in his fifty years in the broiler industry.

The producers has always kept the FLAWSS (feed, light, air, water, sanitation, security) approach to broiler management in mind, a basic industry approach to which he was first introduced about 45 years ago at a presentation by poultry vet Dr. Lloyd Weeber. There are innovations occurring in all of these six areas, says Leatherbarrow, but also at the hatchery and in processing.

“The two new hatcheries being built in Ontario – Trillium Hatchery in Stratford and the one in Woodstock being built by Sargent Farms in partnership with Boires & Freres – these facilities will have all the latest technologies and so producers will have the highest quality chicks ever,” he says.

Leatherbarrow adds that at the other end of production, modular loading is becoming the norm, which he believes is much better for bird welfare and for farm labourers. “After 50 years of two-storey broiler barns, they are all going to one floor so that you can have modular loading,” he notes. “It makes gas stunning possible, which is more humane. Clark Farms opened a one-story broiler barn last January, another later in 2017 and we have another one being built. These barns also provide more feet per bird, which is needed now that we are raising without antibiotics.”

Leatherbarrow reviewed advancements and innovations pertaining to each FLAWSS category:

Feed – Feed bins are now galvanized with powder coating on the inside to prevent rust and improve an even flow of feed. In addition, new pan feeder designs prevent mould and are easier to wash. Some are also now available with LED lights on the trigger pan to attract birds. Beyond bins, new feed additives boost the immune system and are an important part of raising birds without antibiotics.

Light – LED lights provide tremendous operational savings. New research shows that birds should have six hours of darkness and that brighter lighting is better for bird performance. “It used to be dimmer was the norm,” Leatherbarrow says. “My father was told that it should only be bright enough to allow reading a newspaper.”

Leatherbarrow also notes that Clark Farms had issues with flicker levels that only the birds could detect. “We have been able to use a device developed by Sarah Pelissero of McKinley Hatchery in St. Mary’s to measure levels and adjust them.”

“I could not have imagined even five years ago getting an email every morning with an update on barn conditions,” says Leatherbarrow. “The information is also accessible anytime online. Tunnel ventilation systems are much better than what we had in previous years and decades. It’s more important to keep the birds cool and we use a cool cell, but some use sprinklers with large droplets that cause the birds to get up, and then the hot air underneath them is swept away.”

Water – With raised-without-antibiotics production, innovations in water testing are critical to measure levels of factors such as pH and organic particles. Leatherbarrow says research is showing that simply acidifying the water keeps bacterial growth down and, therefore, a prevents birds from having to face this potential source of bacterial challenge.

Sanitation – Natural products are now being used for cleaning, along with new types of bedding. Leatherbarrow uses Thymox, a herbal cleaner containing thyme that he says works as well as any disinfectant that he’s used over his long career. In addition, he says “we use a service with each bait station in the barns barcoded, and we get a report for each station showing how it’s regularly being serviced.”

Security – Biosecurity has come a long way from the days of only using an ongoing foot bath outside the barn. “Barn design is innovating to provide better biosecurity. You can design things so that areas for servicing systems are accessible without having to enter the barn area,” he says.

Leatherbarrow adds he’s really glad to be a part of an industry where innovation is speeding up and so many new products are becoming available. “There is so much going on that it’s hard to believe sometimes, but it’s exciting. Demand for chicken continues to grow and with the new innovations continuing to come, the future is bright.”

Feed bins are now galvanized with powder coating on the inside to prevent rust and improve an even flow of feed.

Innovations in action
Derek Detzler and his family are using many of the innovations Leatherbarrow pointed to. They have been raising chickens without antibiotics outside Mildmay, Ont., since 2004. Their brand new double broiler barn facility received its first flock in February 2017.

Detzler chose in-floor heating to provide birds with better animal welfare and also to achieve better brooding success. He said that after five flocks and learning a little more every time about how to manage things, bird performance has increased.

Detzler also acidifies and chlorinate the birds’ water and uses LED lights. He has a ‘bench’ (also called Dutch) biosecurity arrangement in the barn entry area that’s shared by both barns. Areas for barn system servicing are kept separate from the birds, and he also uses a barcoded bait station service.