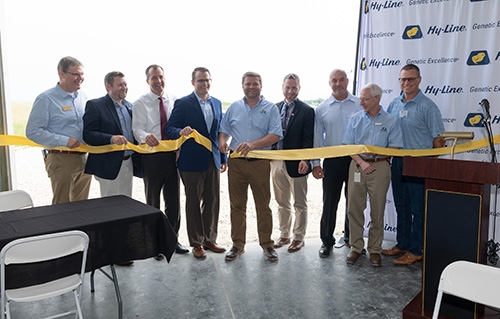 Named after the company’s founder, Henry A. Wallace, the state-of-the-art facility is located stateside in central Iowa.

“We have a substantial responsibility in the effort to feed a growing global population with an inexpensive and nutritious source of protein – the egg,” says Jonathan Cade, president of Hy-Line International.

“The addition of the Dr. Henry A. Wallace Farm allows us continued innovation and genetic progress in Hy-Line layer genetics to accomplish this.”

“We are making significant strategic changes in the Hy-Line breeding program to accelerate the rate of genetic progress,” adds Danny Lubritz, director of research and development for Hy-Line International.

“Egg production and eggshell quality show higher genetic variation at older ages. The pedigree birds housed on the Dr. Henry A. Wallace Farm will be evaluated for these traits, among others, to help ensure continued genetic progress in persistency and shell strength.”

The addition of the new research farm increases the population of research birds from which to identify the top performing individuals to populate the next generation.