Across Canada, traceability pilot projects are helping the poultry and egg industries understand how to move forward 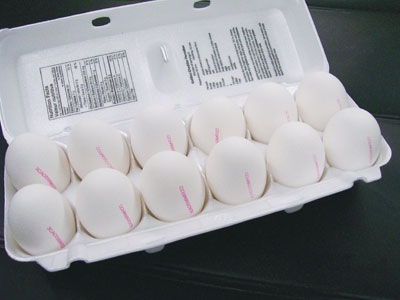 In February 2012, the EFC Board of Directors approved the Canadian Egg Industry Traceability System (CEITS) standard.

Full traceability is not yet mandatory in Canada, but the benefits to the agricultural industry as a whole are many. Whether it involves ready-to-cook seasoned poultry pieces, tomatoes or grain, it’s all about safeguarding our health in times when food safety incidents occur – and presenting an image of Canada’s agricultural industry as responsible and responsive.

As you may know by now, traceability of any food product is a matter of keeping track of three key pieces of information.

On a national scale, Agriculture and Agri-Food Canada (AAFC) initiated a federal, provincial and territorial Traceability Task Team (TTT) in 2005. In addition, an Industry-Government Advisory Committee (IGAC) on traceability was formed, which includes representatives of more than 20 agricultural industry organizations. Working together, the TTT and IGAC created the vision of the National Agriculture and Food Traceability System (NAFTS), and the development of traceability systems is supported through the Canadian Industry Traceability Infrastructure Program (CITIP). Both Egg Farmers of Canada (EFC) and Chicken Farmers of Canada (CFC) have been a part of this.

Under Growing Forward, NAFTS has provided funding for industry-led projects including Systems Development activities (e.g. strategic assessments, industry systems development, pilot projects) and Industry Systems Implementation activities (e.g. technology adoption, testing, and data collection). Under this program, each project is eligible to receive up to a maximum of $2,000,000, but CITIP is no longer accepting applications and the program will end on Mar. 31, 2013. The Growing Forward II policy framework will continue the development and implementation of traceability started under Growing Forward.

In February 2012, the EFC Board of Directors approved the Canadian Egg Industry Traceability System (CEITS) standard.

“This voluntary national standard spells out minimum requirements for tracking and tracing laying hens and eggs,” says EFC Communications Officer Gregory Kampf. “We’re currently working with our provincial egg board partners and other industry stakeholders on implementation. Basically, anyone who implements the standard will be meeting the NAFTS performance targets.” The standard requires data management systems that can work with systems such as the one used by the Canadian Food Inspection Agency, premises identification and movement tracking.

Printing on an egg is not required to meet the standard, but there must be some method in place of tracking where the eggs came from (in Quebec however, it is mandatory for graders to print a unique producer code and province of origin on each egg.) Flocks are to be given a permit number at the hatchery and it is added to along the way. EFC has developed a compliance audit process to ensure participants who wish to part of the CEITS meet the standard.

“As well, EFC and several Canadian egg industry stakeholders visited the UK in fall 2012 to learn about traceability,” notes Kampf.

A current CFC objective on traceability is to formalize current data sharing agreements between provincial boards and governments to build on the success of the traceability data that is collected, says Steve Leech, CFC’s Food Safety, Animal Care & Research national program manager.

Most of the current traceability programs in all provinces are winding down, and a new suite will be introduced under Growing Forward 2 in April 2013; however, some initiatives will also continue through the funding renewal.

The firm that built and was administering premises identification – OnTrace – lost out to AGSI in a recent tender process.

To register your premises under PPR, you are asked to provide the Assessment Roll Number (your tax assessment number from the Municipal Property Assessment Corporation). If you cannot provide this, you will need to provide GPS co-ordinates, municipal address or Legal Land Description (Lot, Concession Number and Township).

The President and CEO of AGSI, Chris Cameron, says that there has been a good response this year from operations within different commodity groups, as well as from independent business owners. “We’ve had a 40 per cent increase in registrations over the previous total since we took over,” he says. “That’s partly a result of commodity organizations encouraging their members to get it done.”

Cameron says his company provides a very secure system, so farmers can be reassured that farm location and other information kept in the PPR is safe from hacking. “We handle information for credit card companies, Elections Ontario, insurance companies and so on,” he says. Cameron adds that his company will pursue being part of the expansion of traceability in Ontario into product ID and movement tracking.

To move forward on that front, OMAFRA has introduced The Traceability Foundations Initiative (TFI), a three-year joint federal-provincial funding program that may provide up to 75 per cent cost-share funding (maximum of $5 million) to support voluntary, industry-led information-sharing networks that will enhance traceability. Projects selected for funding through Intake 2 (this year’s round) of the TFI “will support the design and implementation of Information Sharing Networks across sector organizations and value chains…leading to effective information sharing systems that include premises identification, animal/product identification and movement recording.” Projects will develop/enhance information sharing that meet identified business objectives and achieve measurable outcomes that align with TFI program objectives.

A fee-free pilot project to track the inter-provincial movements of all animals, even those in labs and zoos, called Zone Canada (www.zonecanada.ca) is being piloted at the Manitoba-Ontario border, an initiative of the Canadian Animal Health Coalition. All transport vehicles carrying animals across the border are expected to stop and report to the site at the West Hawk Lake, where manifests accompanying the animals are checked for accuracy. Senders and receivers of animals are also asked to report to the Zone database within which a confidential electronic Zone movement record is created, and can be accessed quickly in an emergency.

Manitoba has focussed its traceability efforts in the poultry industry on PID uptake. In BC, under the province’s Enterprise Infrastructure Traceability Program established in 2009, cost-share funding (75 per cent, cap $20,000) is available.

Similarly, no poultry industry commodity groups or businesses in Alberta have accessed the Alberta Ministry of Agriculture and Rural Development programs during the past two years. These include the RFID Technology Assistance Project, which provides software and hardware for feedlots, the Traceability Pilot Program for exploring traceability technology solutions and the Traceability Training program.