Monitoring your flock for disease 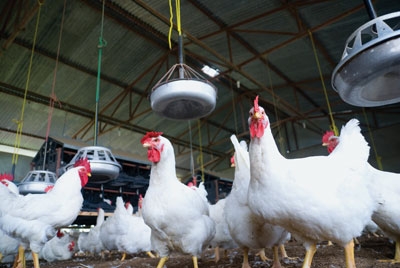 Flock health monitoring programs are important, as they emphasize health rather than focus on disease. istock

Consistently monitoring your flock is the first step in detecting disease2. Early detection of diseases will make treatment and eradication much easier. And the best way to keep your birds healthy during their time in the barn is through routine monitoring.

According to experts, there are three main tips to keeping your flock healthy: knowing your flock, surveillance and staff training.

1) Know your flock
Be sure to keep good records (e.g. egg numbers, body weights, mortality, daily water and feed consumption) so that you may learn what is normal and what is not. Remember, every flock is different.

Routine monitoring of the flock will:

2) Surveillance
Keeping a watchful eye on your flock is critical to ensure reportable diseases6 are recognized as soon as possible and dealt with immediately (as many of these diseases have classical or very specific signs and can be easy to spot)1. If you suspect a reportable disease in the flock, it requires a veterinarian’s prompt diagnosis1.

3) Staff training
It is your responsibility to ensure that your staff are trained to identify changes that might indicate disease, including:

Flock health monitoring programs are important, as they emphasize health rather than focus on disease3. The main advantage of daily monitoring is that signs of disease or deviations from the norm will become apparent before rapidly increasing morbidity or mortality are observed1. This “early catch” will maximize bird welfare and minimize economic losses.

Tips for monitoring your flock:

As well, while monitoring your layer or breeder hens, be sure to check egg production records to identify fluctuations that might indicate underlying diseases1. For broilers and turkeys, monitor chick or poult distribution closely during the brooding period (the first few days after placement) – this will be a good indicator of problems with ventilation, heating systems, feed or water, or possible disease challenges5.

Finally, for all poultry types, use the FLAWSS checklist-feed, light, air, water, space and sanitation4 – to systematically evaluate the birds’ environment and management, which will directly affect their health and well-being.

The year 2011/12 has been a “tipping point” year for the PIC.  It was a very productive year for PIC; the year in which (as we Australians say), PIC “hit its straps.” The highlight was being formally recognized by the Turkey Farmers of Ontario (TFO) as a valuable industry service provider, having been awarded with its poultry business of the year award.

Our emphasis within the organization has been to strategically shift from being a relatively static organization that administered research projects and published research reports to one that uses research results in a more proactive manner, creating and disseminating information that is useful to producers and industry.

The goal for the past four years was to develop, design and deliver programs that address the expressed needs of industry with materials based on research that industry has funded.

The capacity and understanding that we have built is an investment that will pay dividends and we will be able to capitalize on this for many years to come. More programs are in the pipeline and will be rolled out over the coming years, ensuring that 2011/12 will be remembered as a tipping point year, not just a one-off.

Events that made 2011/12 a tipping point year for the PIC include:

In 2011, we moved the conference from Kitchener to London and thanks to the great work and ideas of the Special Events Committee, presented a very practically focused workshop combined with a conference-style two-day event that clearly resonated with producers. Attendance was up and the feedback was extremely positive, indicating that this is the format producers like and that bringing the conference to London was a good strategy.

Research Day
This was a very big day indeed. In using this event as a time to reflect on the life and work of Dr. Bruce Hunter and to present the Poultry Worker of the Year award to him (posthumously), Steve Leeson and Ian Duncan. Once again OMAFRA supported the research day, which demonstrates a growing relationship between our organizations and a respect within that organization for the quality of what PIC presents and the manner in which we do it.

London Poultry Show
The show was bigger than ever this year, with an extra 800 attendees registering.

Extension work
In addition to the above, the PIC has also been the catalyst and driving partner behind some very successful extension work this past year.

The Biosecurity Video, designed by the PIC and students from the two University of Guelph poultry clubs, has been very successful. We have received many requests from across Canada to use it and we have used it in many presentations and will continue to do so. It has been broken into segments, one of which we release each month in order to keep the “biosecurity message” current.

There is enormous regard within the transport sector for the work that went into the Loaded program, reflecting the relevance of the work in addressing current issues.

PIC has been asked many times how we went about developing such good tools. The answer quite simply is that the PIC didn’t do it alone. We partnered with many other organizations to help us develop them and most importantly, we involved the people at the coalface — the producers and service providers who will be using them.

Project work
PIC has involved itself in a number of projects as a provider. All our projects are driven by industry-expressed needs.
2011/12 also showed the completion of several projects:

Industry involvement
PIC continues to receive requests for input into an increasing number of industry and government forums.